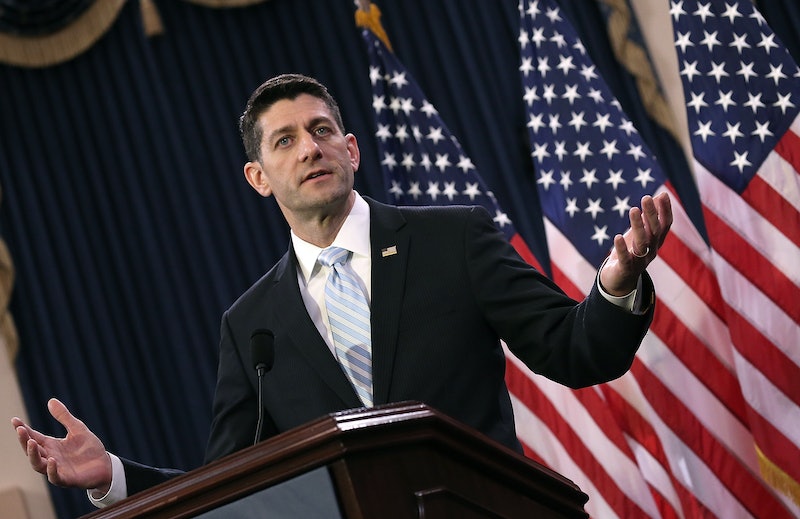 The odds are fairly good that Republicans will have a contested convention this year, which means everybody is now speculating about who, in such a situation, will emerge as the party's nominee for president. One name that repeatedly comes up is Paul Ryan, the 2012 vice presidential nominee and current Speaker of the House. Could Paul Ryan get nominated at a contested convention?

You bet he could. From a process standpoint, there's nothing to prevent Ryan from getting drafted at a contested convention. The party has wide latitude in setting the rules of the convention, and if enough brokers within the party want Ryan to become the nominee, they can make that happen. And let's dispel with this fiction that Paul Ryan doesn't want to be the nominee — he almost certainly wants to be the nominee. Otherwise, he would have categorically ruled out the possibility, and he has not.

The real question, then, is whether the party, broadly speaking, would rally behind Ryan as its presidential candidate. And there's good reason to believe that yes, it would. Powerful people from all corners of the GOP have indicated that they want Ryan to be the nominee, or at least that they'd tolerate him, and that can't really be said of any other candidate — including Donald Trump and Ted Cruz.

One of the Ryan-For-President supporters is John Boehner, an ally of Ryan's and his predecessor as Speaker of the House. In mid-March, Boehner said that if the nominating convention goes beyond the first ballot (and is thus contested), none of the current candidates should get the nomination.

"They all had a chance to win," Boehner said. "None of them won. So I'm for none of the above. I'm for Paul Ryan to be our nominee."

Ryan also has the support of certain elements in the conservative intelligentsia and, more importantly, the donor class. For example, The Huffington Post reported Monday that Charles Koch, one of the richest men alive and an extraordinarily powerful force in Republican politics, is "privately committed" to getting Ryan drafted and nominated at a contested convention.

Perhaps the biggest sign, though, that Ryan could win a contested convention is the mere fact that he was elected to the House speakership to begin with.

When Boehner announced his retirement as speaker in September, there was a serious possibility that Republicans wouldn't be able to agree on a replacement. The issue is that House Republicans — and the party as a whole — was and is split between the "we're conservative but let's be reasonable" group and the "burn everything to the ground and eat them alive" teams. Almost no House Republican had the ability to unify these two factions of the GOP, and for a while, it looked like the GOP might be forced into a coalition speakership with Democrats as a result.

Then Paul Ryan came along. Ryan is a uniquely powerful figure in the Republican Party, because he has the ability to bridge the gap between the party establishment and the conservative grassroots. This earned him the distinction as a "Tea Party whisperer" during his pre-Speaker days in the House, as he'd frequently and effectively act as an intermediary between party leadership and die-hard House conservatives. That's why he was able to cobble together enough support in the House to become speaker.

All of this is a long way of saying that Ryan, and Ryan alone, has constantly demonstrated the ability to bring together different factions of the Republican Party. The rise of Donald Trump and subsequent backlash within the GOP has shown that this split is very real and potentially very damaging to the party. Ryan might be the only possible way to bridge that gap.

Of course, a Ryan nomination would still enrage a whole lot of Trump supporters. He didn't even run, after all, and nominating him would be the ultimate example of the party subverting the will of its base. But if the convention is contested (which it probably will be), and Republican insiders don't want to give the nomination to Trump (which they don't), Ryan will be a strong contender to get the nomination, even if he pretends he doesn't want it. At the end of the day, if the GOP is going to go to the trouble of stealing the nomination from Trump, they might as well give it to a candidate they actually like.