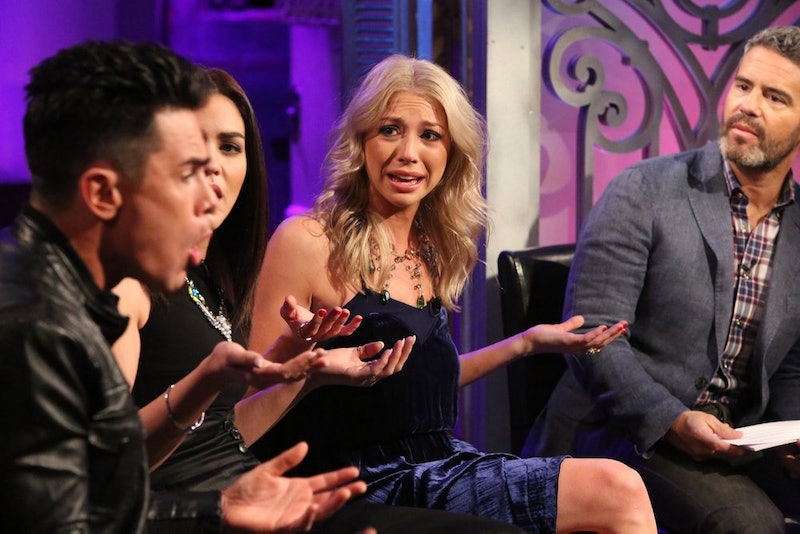 Monday night, Bravo played the the first half of the Vanderpump Rules reunion. Was it enough? Of course not. NEED MORE VANDERPUMP. Fortunately, part 2 will air next week. WHEW. Unfortunately, there will not be 75 more reunion specials after that. DARN. (At the very least, you can entertain yourself with the cast's Watch What Happens Live appearance, and the news that one cast member is writing a memoir.)

What did we learn during part 1 of the reunion?

This is not surprising (because it’s been all over the Internet), but Stassi no longer works at SUR (and lives in NYC). Lisa is not pleased with the way Stassi handled this transition, however. Apparently, Stassi went AWOL before she quit her job. That didn't fly with her former boss. Lisa asks Stassi how being out of contact with everyone has been for her, and Stassi replies that while she’s grateful for the SUR opportunity, severing ties is for the best.

What does this mean for Vanderpump Rules /Stassi? I DON’T KNOW. DOES NOT LOOK GOOD. AUGH.

Tom and Kristen broke up

THANK GOSH. Like Scheana says, it was a messy relationship. For years. The breakup needed to happen. Yes, the cast and I laugh because we know there's always a chance those two will get back together, but this really does look like the end of the Tom/Kristen era. Kristen says she's still in love with Tom and Tom says he tries to look at their relationship as "glass half full," but Kristen and Tom don't seem like they'll be rekindling their toxic relationship any time soon.

Kristen had an ongoing affair

Around the same time Tom and Ariana made out in the Golden Nugget pool (uh, still hilarious? Still hilarious), Kristen was having a “three-month-long affair” with another SUR employee. Who? We may never learn.

Tom and Ariana are dating

I'm actually weirdly shocked by this. I figured they had a "friends who sometimes hookup" dynamic, but wouldn't ever be into dating one another. Oh well. What do I know? Tom says he’s much happier now.

Kristen is dating someone new, too

His name is James and he’s a 21-year-old busser at SUR. “Damn right I’m sleeping with a 21-year-old," Kristen tells everyone. "And I’m having the time of my fucking life right now.” She says these words, but her eyes say the opposite.

Before James/Kristen became a thing, Tom and James planned on living together, made music, and were buddies. Shocker! Tom and James are not friends anymore.

Tom says he caught Kristen and James “on [his] bed, with [his] condoms.” I'm speechless. This show keeps outdoing itself.

Kristen Does Not Support Tom and Ariana

When Andy asks if she wishes Tom and Ariana well, Kristen says, “Um, no. I wish Tom well. And I want him to be happy. Do I wish them well? No.” Throughout the reunion, Kristen makes it very clear that she's not an Ariana fan.

Jax discusses his visit (visits?) to the clink, Jax and Tom argue, and Stassi cries. Bless this show.

More like this
The Love Island 2022 Reunion Drama, Explained
By Sophie McEvoy
Indian Matchmaking’s Viral Revealed A Major Clue About Her Relationship With Aashay
By Radhika Menon
Laura Tott From 'First Dates' Married Her Long-Term Mystery Boyfriend
By Darshita Goyal
'Indian Matchmaking's Pradhyuman & Ashima Have Made No Secret Of Their Marital Status
By Brad Witter
Get Even More From Bustle — Sign Up For The Newsletter