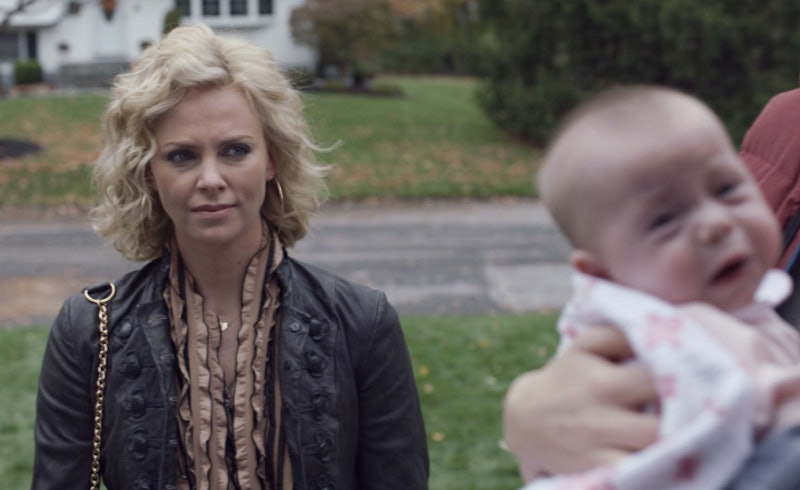 Young Adult is one of my favorite movies of all time, not least because it stars eternal hottie Patrick Wilson and the ever delectable Patton Oswalt. Written by Diablo Cody, and directed by Jason Reitman, Young Adult reunited the team behind Oscar-winning film Juno, and was every bit as insightful, acerbic, and romantic, as its counterpart. Despite positive reviews, Young Adult has often been underrated. Which is why it's such great news that Charlize Theron is making a movie about motherhood with the team behind Juno and Young Adult.

As well as consistently playing kick-ass roles like that of Imperator Furiosa in Mad Max: Fury Road and Queen Raveena in The Huntsman: Winter's War, Theron is outspoken about what it means to be a strong single woman and role model. The Guardian reported that Theron "insisted on equal pay with co-star Chris Hemsworth for Snow White sequel." And, of the double standard women face in Hollywood, Theron told GQ, “We live in a society where women wilt and men age like fine wine. And, for a long time, women accepted it. We were waiting for society to change, but now we’re taking leadership." Theron's kick-ass attitude makes her the perfect person to star in a movie about motherhood.

Having famously adopted two children, Theron has been outspoken about motherhood and everything it entails. Being a single mother clearly agrees with the actor, who spoke lovingly about changing diapers on The Today Show, and said, "I love it! I’ve got to tell you, I’m available for other babies' diapers to be changed. I can do it in my sleep now. I am so good." Her enthusiasm, and sense of humor, continually shine through, and make her the ideal person to star in Diablo Cody's next project.

In an interview with The Today Show, Theron spoke about her own mother, and said, "She raised me to always encourage me to be my own person… and that teaches great independence and confidence." Her mom's approach to motherhood has clearly inspired the actor, who also said, "I would hope to have my son feel the same way about himself. And kind of go and discover the world in his own skin." The fact that the Mad Max actor is so open about her personal connection to being a mother make her the perfect person for this new role.

Theron told GQ in May 2016, "It feels there’s this unrealistic standard of what a woman is supposed to look like when she’s over 40.” The actor's feminist attitude, and passion for destroying outdated stereotypes about women, should influence her new movie about motherhood. The team behind Young Adult is sure to make an interesting, sarcastic, funny, and surprising movie about parenthood, and I can't wait to see the finished product.