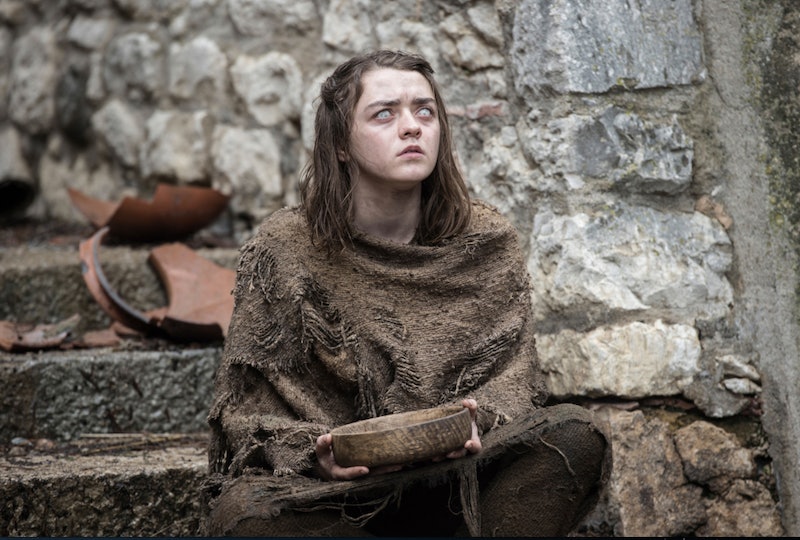 If one thing can be said about the female characters of Game of Thrones it is that for the most part they are all very strong women who don't take anyone's sh*t. (Or, in Sansa's case, learn over the course of the seasons not to take anyone's sh*t). And while Maisie Williams, the actor who plays Arya Stark from the series, claimed in an interview with Entertainment Weekly that she doesn't believe Arya is a feminist because "we should stop calling feminists 'feminists' and just start calling people who aren’t feminist 'sexist' and then everyone else is just a human. You are either a normal person or a sexist" — it can't be denied that her character upholds the ideals of feminism.

Arya Stark doesn't play by or conform to the gender rules of her sexist society. She sees herself as a person, not just a lady or just a girl. She does what she wants regardless of whether or not it's what girls are supposed to do. Whether she knows it or not, Arya Stark is a feminist character. So here are 11 ways Arya proves that she is a feminist, even though feminism doesn't really exist in The Seven Kingdoms.. according to the actor who plays Arya.

1. She Excels At Tasks Girls Aren't Supposed To Practice In GOT

2. She Dresses For Her Own Comfort And Not To Please The Male Gaze

Because it's hard to be on the run in a dress. But also because Arya doesn't do anything she doesn't want to do.

3. She Doesn't Let Men Talk Down To Her

Take that, Gendry, you beautiful bastard. (And then come back to Arya so you guys can live happily ever after.)

4. She Named Her Sword Needle

If that isn't one of the funniest jabs at ridiculous gender constructs in Game of Thrones, I don't know what is.

Arya doesn't care if you're a man, woman, or Hound. If you have messed with her or her family you make it on the list of names she repeats over and over again before sleep. These are the people she has, or will, kill.

6. She Admired Brienne of Tarth

Although Brienne wanted Arya to come with her, so she could keep her oath to Arya's mother, Arya declined. However, Arya didn't Brienne, clad in a suit of armor, as someone to be laughed at. She recognized Brienne's skill, and that her skill was far more important than her beauty.

7. She Knows Her History

Arya keeps herself educated because she knows that knowledge is power, and to get the men of Westeros to listen to you, she must outsmart them.

8. She Doesn't Want Anybody To Take Care Of Her

Arya isn't relying on men to take care of her, because she's seen where that road goes. Instead, she chooses to be independent and go it her own way. Arya takes care of herself.

9. She Renounces The Role Society Puts Her In

She doesn't want to be a lady and so she refuses to behave in any gender conforming terms. Go Arya!

10. She Avoids All Roles

She understands that titles and personhood is just smoke and mirrors. Admittedly, she goes on her mission to become a Faceless Man as a means of killing the people on her kill list, but the feminist in her doesn't mind being no one.

11. She Names Her Direwolf After A Famous Warrior Queen

Nymeria, where are you?

Arya upholds the ideals of a feminist in Westeroes, whether or not she'd ever call herself one.