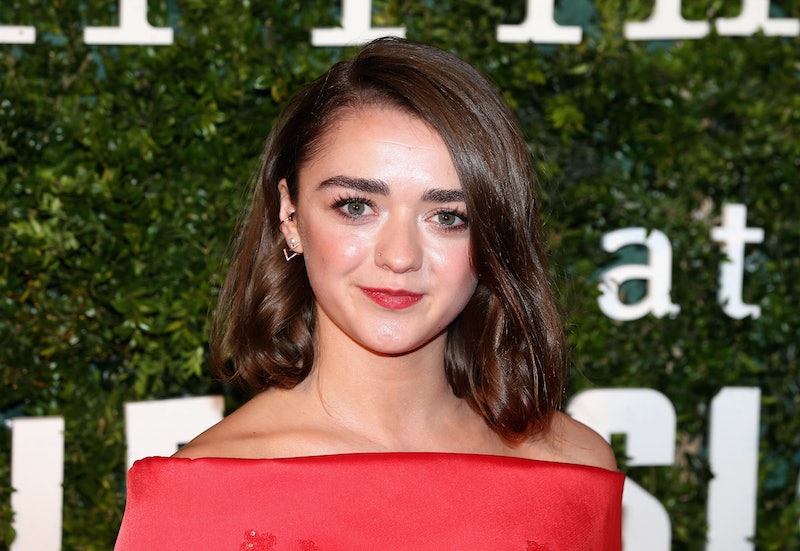 Is Arya Stark a feminist? Maisie Williams, who plays Arya on Game Of Thrones , remembers being asked that very question when she first started the HBO show. "I didn’t even know what a feminist was," Williams told Entertainment Weekly in an interview about GOT's upcoming sixth season. At the time, Williams was just 12 years old, so learning the intricacies of feminism wasn't really a priority on her pre-teen to-do list. But then someone explained feminism to a young Maisie Williams, and she says she thought, “Isn’t that just like everyone?” In her mind, it was impossible to imagine that any women or men would be against equality. It also made her think about the actual word "feminist," and why it seemed to be such a dirty one. Now, at 18 years old, Williams thinks "we should stop calling feminists 'feminists' and just start calling people who aren’t feminist 'sexist' – and then everyone else is just a human. You are either a normal person or a sexist."

That either/or statement is bound to get reactions from those who call themselves feminists, and those who definitely don't and never will. The statement can be interpreted as a close-minded thing to say, but it's also a very forward thinking one. I lean towards it being the latter, and feel like it's not that farfetched a thing to hear from a woman her age. It's not that Williams wants to get rid of the word completely; she's just suggesting it shouldn't carry the weight it does now. And what a weight that is.

The word "feminist" is still perceived as a loaded one that many don't want to use for fear of what other people will take away from the label. In a 2016 national survey about feminism in America by the Washington Post and Kaiser Family Foundation, 70 percent of men and women said "empowering" was the best word to describe feminism in the United States, while 43 percent said "angry."

"People get a label when they’re bad," Williams told EW. And she isn't necessarily wrong. Some of the other well-known -ist words — racist, sexist, ageist — are not labels you want to be associated with. And, for a younger generation of women, feminist is not a word they want to be called, even if they do agree with the movement's message. In a 2015 poll about feminism, abortion, and the Affordable Care Act, Vox found that 85 percent of Americans agreed with "equality for women," but only 18 percent of Americans consider themselves feminists. Fifty-two percent told Vox they were not feminist.

The millennial generation may be starting to shun the "feminist" label, but they are embracing the fight for equality. Williams' "you're either a normal person or sexist" comment gets at the idea that, for many young women, the feminist fight is commonplace in their lives and should be in everyone's. They embrace the positive side of the movement, even if they don't necessarily want to commandeer the word "feminist" for themselves.

Williams gives another reason why the word may actually be doing more bad than good. She told Entertainment Weekly she would sometimes really worry about speaking up about feminist "out of fear of being bashed by women on social media." Sometimes, Williams explained, it would be men who went after her for speaking her mind on the topic, but often it was women who didn't agree with her. "There’s something not right there," Williams said. There is definitely something wrong about going after a woman who giving her opinions on a topic that there is no right or wrong answer to. It's this reason that you can understand why Williams would be quick to say get rid of the word feminist, it's doing more harm then good.

It's true that nearly every female celebrity is asked in an interview if she's a feminist only to deal with backlash. If a female celebrity says yes she is a feminist, she may get a pat on the back, but she also deals with those who think she doesn't show it or hasn't proven she's a true feminist. It's something Beyoncé has dealt with since she danced in front of a neon "Feminist" sign at the MTV Video Music Awards in 2014. Even when Beyoncé gave Elle her definition of feminism recently, which, like Williams' statement, talked about it being more than a label, the reaction was mixed on whether it was right on or missed the mark.

But at this point, it's probably worse if you say you aren't a feminist. Katy Perry has been criticized by those who question why she won't just call herself one if she so wholeheartedly agrees with the ideals it encompasses. If it's the word "feminist" that frightens women and keeps them from speaking out for equality, then it loses its power. If this particular F-word leads to division when we should all be working together, then it's not helpful to the cause it stands for. If it's being used to make women feel less involved in a movement that should be for all women, then maybe we should think about not using it. The point isn't the word itself; it's what it stands for, and that's what Williams is saying in this interview.

So, is Arya Stark a feminist? She sure is, but she prefers you don't call her one. Whether you agree or disagree with her is your choice.