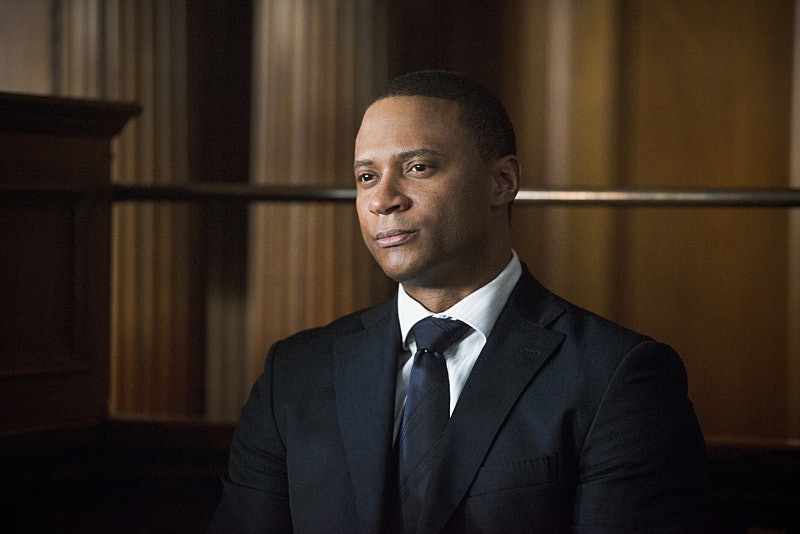 If there was ever any doubt about whether or not John Diggle's brother Andy could be trusted, Wednesday night's episode "Eleven-Fifty-Nine" finally managed to make things clear, and unfortunately this did not bode well for the Diggle brothers' relationship. Andy betrayed John on Arrow in a very big way by giving Damien Darhk the piece of the magical idol he needed in order to get his powers back. It's because of these actions that Laurel Lance is dead and buried in the grave that we've been flash forwarding to all season long. And as devastating of a loss as her death is, it wasn't the only fatality of the evening.

John Diggle is never going to forgive himself for trusting his brother so completely, even when Oliver tried to get him to connect the suspicious dots. He will blame himself for what happened to Laurel and undoubtedly fall down a very dark rabbit hole of guilt. Not only that, but his relationship with the brother he'd grown to love again has now officially been ruined. I can tell you right now that there is no recovering from a betrayal of his magnitude. So, in a way, it's like Diggle lost two loved ones that evening, rather than just the one.

Luckily, it seems as though Oliver doesn't bare John any ill will. If anything, I'm sure he understands how easy it can be to get blinded by love. He knows John would never have intentionally put Laurel's life at risk and would've gladly sacrificed his own life if it meant saving hers. That's just the kind of guy John is and hopefully he doesn't lose sight of that. Because if anyone deserves the blame (aside from Darhk, of course), it's Andy. Let's just hope that both he and Darhk get the payback they so deserve.