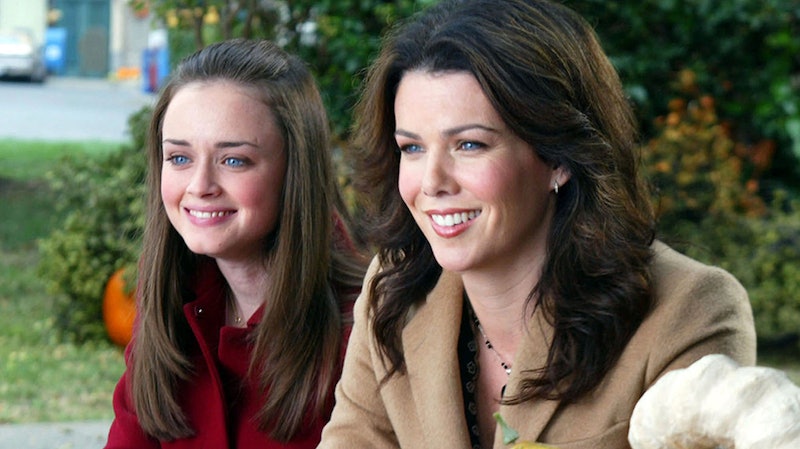 Gilmore Girls fans, all of our fan theories are starting to come together. Filming is underway for the Netflix four-part film series revival of the show, and photos from the long-awaited continuation are finally being released. In the latest edition of Entertainment Weekly magazine, fans aren't only provided exclusive interviews with Gilmore Girls creator Amy Sherman-Palladino and members from the beloved cast, but they're also given clues they might have never imagined — in the form of these very Gilmore Girls revival photos. Because, basically, the new photos are putting some of our most coveted theories into perspective.

First off, the romantic endeavors for the Gilmores have always been a main topic of conversation. And now, with a quick glance at one new photo, it seems as if we can finally relax when it comes to how Lorelai Gilmore's love life is going. She's spotted holding hands with the same love she had at the end of Season 7, Luke Danes. Now, you may be thinking, of course they're still together, but, with almost ten years having past since the show's end, there was a slight chance that Lorelai and Luke could have gone their separate ways.

Thankfully, this very photo could be further confirmation that the apparent wedding taking place in the revival could be theirs, if they aren't already married that is. I knew those two were meant to be. Seriously, just look at this EW photo for yourself, and, before you know it, you will be jumping up and down too. It's almost too much for a single fangirl heart to handle.

While the latest photos, unfortunately, don't provide us with any insight on Rory's love life, they do happen to tell us quite a bit about where her life is headed career-wise. Despite Rory's big dreams of being an overseas news correspondent, one photo shows Rory standing at the head of what appears to be a classroom. Does this mean Rory is teaching? If she is teaching, that could explain why the revival appeared to be filming at the Chilton grounds. It also could say a lot about what has happened in Rory's life after all this time. Maybe she already was a big time journalist and now she's moving on to teaching? Maybe she decided she couldn't stay away from Stars Hollow and never really left? Or, maybe, this photo is meant to trick us, and Rory simply heads to Chilton to give a speech and inspire the next generation.

And that's not even the last of it. The photo of the other Gilmore girl, Emily Gilmore, is also very telling. While it's no surprise that Emily is properly dressed in a suit (She's always been keen on fine taste), there is an air about her that seems a whole lot more professional. With Richard Gilmore sadly out of the picture, this photo could be hinting at the fact that Emily has started a career of her own. I mean, do you really think that she would sit alone and let the dinner parties go on without her? I certainly don't think so.

But, fan theories aside, these photos also prove one more thing: Stars Hollow is still up to it's wacky ways. Lorelai and Rory are pictured in traditional hippy attire, so it is clear that some things about this small, lovable town will just never change. And my eyes are beginning to fill with tears born of nothing but pure nostalgia. I need a moment.