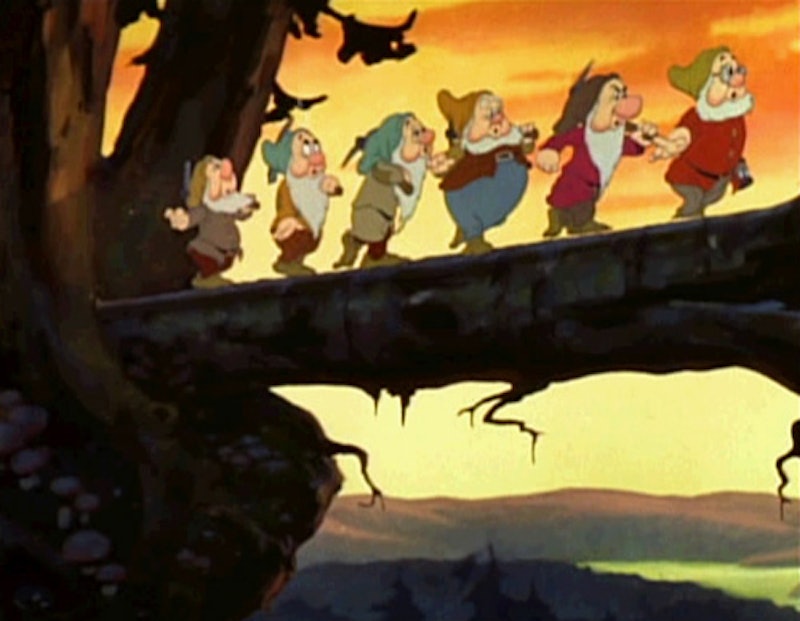 There are few things that go better together than books and Disney. With all the fairy tales that Disney tells, it's only natural for the two to go hand-in-hand. Plus, as a child of the '90s, I spent most of my childhood either reading or watching Disney classics.

Of course, you can't get more classic than Snow White. Even though I don't really get why she spends so much time waiting for her prince to come (come on girl, there's so much more you could do), you can't deny what a landmark film this is. As the first feature-length animated film, Snow White brought storytelling to life in entirely new ways.

I'm such a geek for new ways to categorize books, and the adjectives each dwarf is named after are such a fun excuse for some book-picking. Just as each dwarf has their own special quality, so do each of the books on this list. From nonfiction exposés to dystopians to fun romps, you'll find a wide array of great reads on this list.

So, whether you love Dopey's goofball antics or Grumpy's bahumbug banter, here's a book to match every dwarf (and every mood) a Disney fan needs. Hi-ho, hi-ho, it's off to read we go!

In the alternative world created by literary shining star Karen Russell, there's an epidemic of people who have lost the ability to sleep. The Slumber Corps has emerged as an organization dedicated to helping healthy sleepers donate sleep to someone in need. But as this book progresses, you'll find out that Slumber Corps may not be exactly what they seem.

2. Doc: The Immortal Life of Henrietta Lacks by Rebecca Skloot

Doc has so many questions, and so does this nonfiction classic. Henrietta Lacks was an impoverished black woman whose cells were used for scientific research without her knowledge. Now, the fate of her cells have become the center of the emerging need for bioethics, as emerging technology forces us tackle new issues of ownership. An engaging and important read, this one will get your brain spinning.

3. Grumpy: The Catcher in the Rye by J.D. Salinger

There is no shortage of grumpy characters in literature, but Holden Caulfield is a crowd favorite. I mean, sure he's going through a lot. He just got kicked out of school again, and growing up majorly sucks. Plus he's surrounded by phonies all the time! If you haven't read this classic yet, get on board.

4. Dopey: Hyperbole and a Half by Allie Brosh

The word "dopey" immediately makes me think of the "Simple Dog" in the classic Hyperbole and a Half post, "Dog." This book is a collection of Brosh's hilarious internet writing. If you're already a fan of Hyperbole and a Half, it's time for a re-read, because there's a sequel coming out this fall.

5. Bashful: The Schwa Was Here by Neal Shusterman

This is one of my all-time favorites. The story of a kid who's "functionally invisible": nearly impossible to notice and easy to forget. Laugh-out-loud funny and deeply poignant, this is a book that is both a quirky romp through adolescence and an exploration of how we make our mark on the world.

If only there were a dwarf named "Merciless Joy." I can't recommend Nimona enough, it's such a delight to read. A graphic novel about a bloodthirsty, shapeshifting teenage girl who has declared herself the sidekick of not-that-villainous Lord Blackheart, this is the kind of book written for children of the Internet.

There's plenty of plague fiction out there for Sneezy, but who can resist a good Atwood read? The first in her Maddaddam Trilogy, this is a must-read for any Atwood fan. Snowman is the only traditional human left, in a world where, after a biological disaster, the only people left are those who have been drastically genetically altered. A fantastic, sci-fi exploration into the nature and limits of humanity.