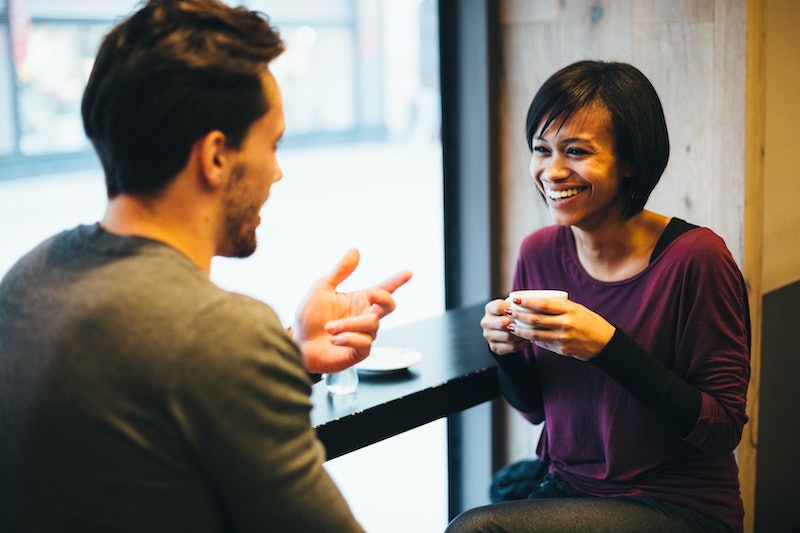 One of my dearest friends in the world recently got engaged. When I found out her partner popped the question (in Italy, sigggh), my eyes welled up with those ever-so-happy tears and I couldn’t contain my excitement for her. It was one of those moments that I’ll never forget and one that, as a bridesmaid, I’ll remember when I see her walking down the aisle (in a dress I saw her try on!) in October. Her big day is special to me, obviously because she’s special to me, but also because she’s taught me so much about love.

Though we have very different dating histories — she met a wonderful man at 22 and dated him for four years before getting engaged and I’m one month into my first relationship since 2012 — we share one very important thing: we’re big suckers for love. And I mean love at it’s gooiest, most ridiculous, most amazing, most precious state. We savor the words, the sentiments, the gestures, the romance, and by being friends, we’ve been able to balance one another. I’m the rational to her irrational and she returns the favor when I go off the deep end too.

It’s always been an interesting dynamic asking her for dating advice when she never had the chance to play on Tinder or weed through bachelors in New York (I call her lucky, for the record, she calls me lucky for getting the experience). What I’ve learned from listening to her (even if I mentally roll my eyes from time-to-time) is that above all other things, and even in moments when it’s the hardest thing to believe in the whole wide world, love is out there. It’s big, it’s boundless, it’s magical. And it happens every damn day.

Whether or not you're not planning on getting married yourself, advice from those who put a ring on it or are wearing one can definitely come in handy in your love life. Here's the best love advice seven recently engaged folks have to offer:

Try: The Right One: How to Successfully Date and Marry Right , $17, Amazon

1. Sparks Can Grow Over Time

"Never, ever discount the [person] who doesn't immediately give you sparks. The best relationship I've ever been in (with my fiancé) was a slow burn. Sparks come quickly but they fade just as quickly and they're flashy like fireworks so girls are drawn to them. But that's a mistake! Look for the [person] who gives you a slow and ever-increasing steady burn instead. Changing my mindset about this led me to the best partner of my life. -Andrea, engaged to Alexander since Valentine’s Day 2016 while on vacation. They met at a bar in Manhattan 3.5 years ago.

2. You Can Never Over Communicate

“Communicate often — and more than just text messages! Kyle and I were long distance for the first six months and fortunately we were able to see each other about every 3-4 weeks, but we didn't go a day without at least speaking on the phone. Also, get to know each other (like really get to know each other). Learn about each other's family, upbringing, friends, life pre-you, drinking habits, spending habits, etc. You'll be happy to know more about their life in the dating stage so you aren't surprised to learn things you dislike about them three years in.” — Hillary, engaged to Kyle on their second year anniversary on New Year’s Eve. They met through a mutual friend in Nashville 2.3 years ago.

“No matter how many dates you go on or how often you feel like it’s not going to work out, just keep going. If every person was the ‘right person,’ than such a thing would never exist.” -Jenn, engaged to Dan since August 2015 in Italy. They met through mutual friends at a comedy show in New York four years ago.

“First, understand that long-lasting relationships are hard work. The look for someone who understands that and will be willing to work with you through the good and the bad. Always consider the type of person you are least expected to date!” -Stephanie, engaged to Eric since 2015 while on a hike in California. They met through Stephanie’s ex-boyfriend 4.5 years ago.

“My best tip for single folks is to fall deeply in love with yourself first before you try to fall in love with anyone else. Have compassion for your own flaws and you will be able to become more empathetic for any partner you may have. Once you love yourself and know you're worth, you're more open and understanding of who has the ability to carry your heart with theirs. Self-love radiates from within, and is attractive to everyone.” -Michelle, engaged to Craig since Christmas Eve on 2015 while visiting the Blue Ridge Parkway. They met online four years ago.

6. Say What You Feel

“Don’t be afraid to voice when you are upset or think that something is wrong. If you can't talk about the hard things then you will never be able to build a lasting relationship." -Brad, engaged to Rachael since October 2015. They met online in 2011.

“Confidence is sexy and body language is everything. Stand up straight, don't cross your arms and let the chemistry flow naturally!” -Daphnie, engaged to Stuart since October 2015 at Signorello Vineyards in Napa. They met through a running club four years ago.