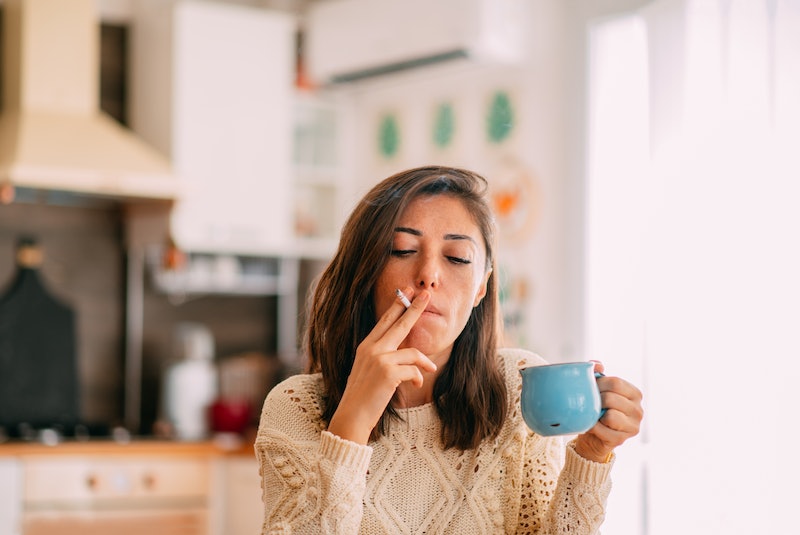 If you struggle with panic attacks and panic disorder, know that you're not alone. Actually, panic disorder is pretty common in the U.S., and it's most common among adult women. WebMD reports that panic disorder affects approximately 2.4 million American adults, (the condition typically doesn't manifest until late adolescence or early adulthood), and women are twice as likely to be affected by panic disorder than men. Obviously, medication and therapy can help with panic disorder symptoms, but learning how to avoid habits that make panic disorder worse — like overdoing it on stimulants, not getting enough sleep, and skipping your workouts — can really help, too.

That said, good habits alone aren't a cure for panic disorder, and when left untreated, panic disorder can cause other serious conditions, like agoraphobia and claustrophobia, to develop. So if you struggle with panic attacks, talk to your doctor about it. Moreover, if you find that your habits could be making your panic disorder worse, that doesn't mean it's your fault that you suffer from frequent panic attacks. Though the exact cause of panic disorder is unclear, it's presence can be explained by a variety of physical, mental, and environmental risk factors that simply aren't always controllable.

Panic disorder can be brought on by everything from genetics to brain abnormalities to stressful life changes (like breakups, big moves, or the death of loved one). Fortunately, however, 90 percent of people suffering from panic disorder are able to find relief by seeking appropriate treatment. So if you struggle with panic disorder, definitely consider talking to your primary care physician about treatment options, but also avoid these five habits that can contribute to panic disorder.

1. Not Exercising Every Day

I'm sure you don't need me to tell you why you should be exercising daily. Not only can exercise improve posture, boost sex drive, and cut down on your risk of developing heart disease and certain cancers, exercising daily is crucial to maintaining mental health, too. (And yes, walking and dancing alone can count.)

As you may already know, exercise releases feel-good chemicals, (like dopamine and endorphins), that help the brain and body feel their best. On top of that, exercise can actually reduce fatigue and improve cognitive function. This is particularly helpful on days when panic attacks have depleted your energy and you don't want to chug a bunch of potentially anxiety-triggering coffee just so you can get sh*t done. Which leads us to...

2. Overdoing It On Coffee, Alcohol, & Cigarettes

OK, with the exception of cigarettes, I'm not suggesting that someone with panic disorder should avoid these things altogether. Coffee and beer are delicious, and they can be really fun when consumed in moderation. Plus, coffee in small doses can actually help anxiety. That said, if you struggle with panic disorder, (and even if you don't), it's important to be aware of how much overdoing it on stimulants and depressants can mess you up.

As a central nervous system depressant, alcohol can cause physical symptoms — like dizziness, rapid heartbeat, and heart palpitations — that are capable of triggering panic attacks. What's worse is these sensations can happen both during and after you've been boozing. And since coffee is a central nervous system stimulant, it can trigger your "fight or flight" response and leave you feeling nervous, moody, and restless.

Cigarettes are notoriously bad for you, but they're particularly bad for people with panic disorder. In fact, WebMD reports that panic attacks are more common in smokers than non-smokers. This is partly because even smoking several times a day won't prevent smokers from experiencing the stress of minor withdrawal symptoms between cigs, but it's also simply due to the fact that smoking makes it harder to breathe, and contains nicotine as a stimulant. If your body thinks it's suffocating, that could trigger a panic attack. When your body starts panicking, your mind follows suit. So, keep your coffee and alcohol intake to a minimum, and avoid smoking cigarettes as much as possible.

Diet is directly related to mental health, so if you're eating a whole lot of fast food and forgetting to stay hydrated, you're going to make your panic disorder much harder to deal with. You should particularly avoid high-sugar foods if you suffer from panic attacks, but know that processed foods, fried foods, and fat-free foods can contribute to mental health problems as well. Diet alone can't "fix" panic disorder, but eating high-protein foods, (like yogurt and nuts), and serotonin-boosting carbohydrates, (like whole wheat bread and brown rice), should definitely help you feel less prone to panic.

Sleep loss has been shown to make anxiety worse, because sleep deprivation actually activates parts of the brain that contribute to anxiety. As PhD, Rick Nauert explained in an article for Psych Central, "Neuroscientists have found that sleep deprivation fires up areas of the brain associated with emotional processing. The resulting pattern mimics the abnormal neural activity seen in anxiety disorders." What's worse is that people who are prone to anxiety, panic attacks, and/or other anxiety disorders are especially vulnerable to the mental side-effects of insufficient sleep. These findings are all the more frustrating because panic disorder often makes it really difficult to sleep.

Sleep loss and anxiety are clearly cyclical, so it's crucial to your mental health and overall wellness that you get enough sleep. If the symptoms of your panic disorder are so severe that getting at least seven hours of sleep a night seems like an impossible goal, consider trying these natural sleep aids. Also, keep a journal by your bed. Seeing all the worries that are keeping you awake in writing might help you stop obsessing over them. Going to bed earlier and avoiding technology for an hour or two before you call it a day should help your brain shut down enough for you to pass out, too. But if no number of sleep tips help, don't put off talking to your doctor about your treatment options. You need your sleep stay physically and mentally well.

Panic disorder and frequent panic attacks can make staying home alone feel like the safest option, but isolating yourself and withdrawing from social activities will only make panic disorder worse. I'm not saying you shouldn't stay home alone when you need to, because for some of us, alone time is energizing. That said, loneliness can be really bad for both mental and physical health.

Excessive loneliness shortens our lifespans, increases stress, and hurts the body's immune system. So push yourself to see your friends and family sometimes, even when you don't feel like it. And on the days that you just can't handle socializing at all, try being more active in your alone time rather than staying in and watching Netflix all day. (Although sometimes that's a perfectly OK thing to do too.) Engage in some of the hobbies you love, go for a walk in the park, or see a movie instead of simply staying inside all day with nothing but your thoughts and fears to keep you company.

More like this
Bonnie Milligan's Wellness Routine, From Daily Journaling To Drugstore Teas
By Jessica Derschowitz
18 Hinge Prompt Answers To Try If You’re Looking For Something Casual
By Lexi Inks
The Case For Following A Menstrual Cycle Workout Plan
By Emma McGowan and Carolyn Steber
Why Being “Too Sensitive” In Relationships Is A Good Thing
By Lexi Inks
Get Even More From Bustle — Sign Up For The Newsletter
From hair trends to relationship advice, our daily newsletter has everything you need to sound like a person who’s on TikTok, even if you aren’t.