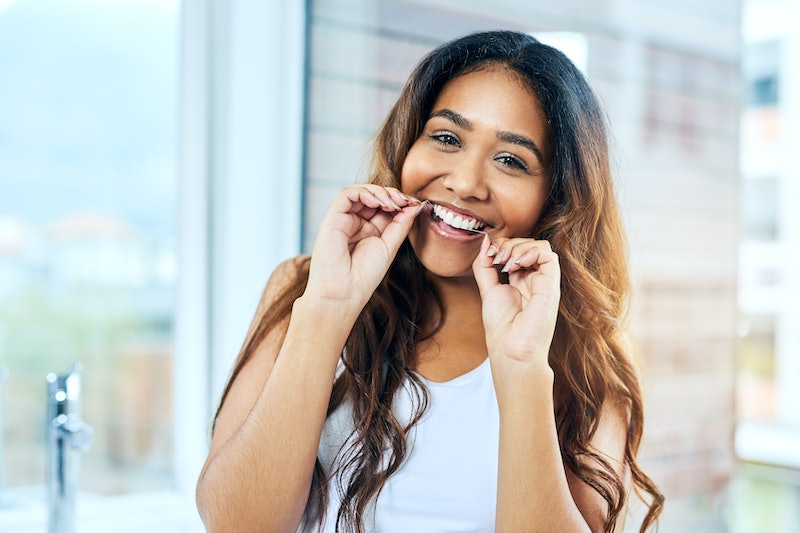 This year I made it my resolution to floss every single day. Not once a month, or once a year, but every single day. It was quite the oral hygiene turnaround for me. I went from not caring to suddenly being filled with concern for all the gross things that can happen when you don't floss. And with that, a habit was born.

I will admit that it was rough going at first. But now that it's part of my routine, I have to say that flossing is something I actually enjoy. It only takes five minutes (I do it in the shower), and then I get to spend the rest of the day feeling oh so very clean. I've also noticed that my gums look healthier, and I have generally fresher breath.

I do understand, however, that not everyone will share my flossing enthusiasm. In fact, flossing is technically one of the most difficult personal grooming habits there is, according to an article by Tracy Brown on WebMD.com. So it makes sense why 20 percent of people don't floss at all. I mean, there are so many different ways to hold the floss, it can get tangled, it hurts if you don't do it right, and it's mildly time consuming. I get it. But trust me when I say that once you get started, you won't want to stop.

Still not convinced? Then check out this long list of gross things that happen when you don't floss.

1. Plaque Will Build Up For Days

If you've gone a hot minute since flossing, then I can bet there are a few unpleasant things building up in that mouth of yours. I'm talking about food particles between your teeth, germs, and a sticky film of bacteria called plaque. The worst of these is the plaque, however, as it can build up and make you susceptible to a whole host of health issues. Not to mention, it looks kinda gross.

OK, so let's say the aforementioned plaque has moved on in. Once it starts to build up, you are officially running the risk of getting a mild gum disease called gingivitis. This is a painful swelling of the gums that can also cause sores in the mouth, according to WebMD.com. Definitely something worth preventing.

3. Your Gums Will Probably Bleed Somethin' AwfulIf you just started flossing and have noticed pink in your spit, don't be alarmed. Bloody gums are usually a sign you should keep going, instead of a sign you should stop. That's because the best way to heal things up is to remove the plaque that's causing tender gums, according to NHS.UK. Once your gums become healthier, the bleeding will likely stop.

Bad breath, medically known as halitosis, can be caused by any number of things. But one of the main culprits is poor oral hygiene, according to the Mayo Clinic. That's because brushing and flossing get rid of food particles, which chill in your mouth and breed bacteria. So if you have bad breath, give those pearly whites a floss, and hopefully it'll go away.

5. Cavities May Show Up

Again plaque is at play, and this time it's causing cavities. According to MedicineNet.com, tooth decay occurs when food particles, such as sugars and carbohydrates, are left on the teeth. Bacteria start to digest these bits of food, turning them into acids, which then combine with bacteria and saliva to form plaque. The acids in plaque dissolve the enamel surface of the teeth, creating holes. And (ta da!) you have a cavity.

6. Your Dentist Will Totally Know

If you've ever flossed one time before a dentist checkup, or straight up lied and said you "always" floss, don't think you're fooling anyone. Dentists can totally tell. As noted on AskTheDentist.com, it takes about a week of solid flossing to make gums stop bleeding when they're cleaned. So if he or she sticks some floss in there and you bleed, the jig is up. It's way better to actually floss, and then report back with full honesty.

7. Your Gums May Start To Recede

Gum recession can be kind of sneaky. In fact, you might not even notice it as first. But take a sip of an icy beverage, or hot tea, and you might feel pangs of pain near your teeth. This type of tooth sensitivity is a sign of gum recession, which is when the gum tissues starts to wear away and pull back, exposing the tooth's root, according to WebMD.com. Sadly, it can't be reversed, but you can stop it in its track if caught early enough.

It may sound like the stuff of nightmares, but I assure you — your teeth can fall out. This is especially the case if you leave gingivitis and horrible gum recession untreated for ages, which can make things all loose and prone to infection. As Claudia Hammond noted on BBC, "In a 26-year longitudinal study of men in Norway, teeth surrounded by inflamed gums were 46 times more likely to be lost by the end of the study than teeth surrounded by healthy gums." So get that gingivitis under control, ASAP.

9. It Could Lead To Pneumonia

Your mouth is a gateway to your lungs, so it makes sense that whatevers going wrong in there can start to affect other areas of your body. As Lauren F. Friedman noted on BusinessInsider.com, "When pathogens lurk in your mouth, you inhale them right into your lungs, where they can wreak all kinds of havoc. One major review pointed to this process as the reason for an association between poor oral hygiene and hospital-acquired pneumonia. Improving oral hygiene — through some methods beyond brushing and flossing in this case — reduced the incidence of such pneomonia by 40 percent."

HPV, or the human papillomavirus, is more likely to crop up in people with less-than-stellar oral health habits. This was recently seen in survey data from the Centers for Disease Control and Prevention. "Almost one-third of the 3,439 people said they had poor to fair oral health. They were about 50 percent more likely to have an oral HPV infection. The three specific indicators of oral health also were associated with HPV infection," said Nancy Schute on NPR.org.

11. Your Pearly Whites Are Less Likely To Be Pearly, Or White

Sure, your stained teeth probably have a lot to do with your wine consumption, or bad habits like smoking. However, they can also be caused by poor oral hygiene, and — you guessed it — a lack of flossing. According to an article on Listerine.com, "When you do not routinely brush, floss, and rinse your mouth to remove plaque build-up and tartar, this can hasten the discoloration of your teeth." So get into that bathroom, and get to work.

So many, if not most, of these things can be prevented with a thorough brush and floss. Get into the habit of flossing regularly, and enjoy your shiny, healthy teeth.