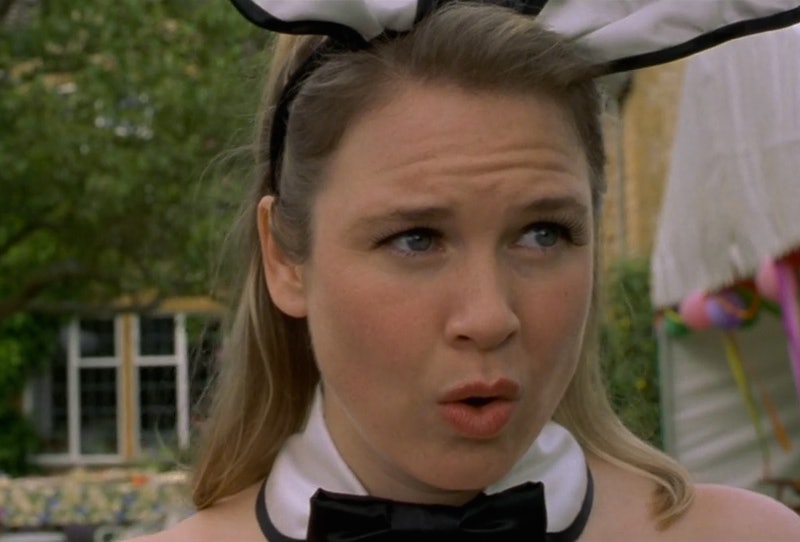 With a column, three books, two movies, and another movie — Bridget Jones' Baby — on the way, Helen Fielding's blundering Bridget has won the hearts of many women who can relate to her antics for over two decades. And Renée Zellweger's Bridget is just as lovable and quotable as she was when she first hit movie theaters 15 years ago. Even if I found more issues with Zellweger's British accent now than I did back in 2001, her talking about her bottom being "the size of Brazil" and — on the flip side — her "genuinely tiny knickers" still makes you love Bridget as much as you did in 2001.

Of course, Bridget isn't the only funny and memorable character, so put in your Bridget Jones DVD or stream it on Netflix in honor of the 15th anniversary. And during your rewatch, look out for these 18 hysterical, but perhaps forgotten, lines from Bridget Jones' Diary. My apologies in advance for classic lines that are missing from this list, but you and I both know you couldn't have possibly forgotten them since some of them are the top 30 movie quotes of our time.

1. "Oh, don't be silly, Bridget. You'll never get a boyfriend if you look like you've wandered out of Auschwitz."

Perhaps the most underappreciated character (from a comedic standpoint) is Bridget's mother Pam Jones, who has a knack for offending people as she displayed immediately in the film with this truly distasteful Holocaust insult.

2. "Most of the time I just want to staple things to her head."

Ahhh, Perpetua. Haven't we all wanted to staple things to a coworker's head in a confined workplace just like Bridget?

3. "Then I think a well-timed blow job's probably the best answer."

When Bridget asks how to handle a work faux paus with her boss Daniel, her friend Tom gives her the most logical advice.

Bridget's response to flirtatious e-mail exchanges with Daniel is a perfect way to silence anyone in the workplace or in life in general.

5. "To be honest, darling, having children isn't all it's cracked up to be. Given my chance again, I'm not sure I'd have any."

Clearly, Bridget's habit of putting her foot in her mouth was a learned behavior from her ever-loving mother.

Jim Broadbent's incredulous expression as he asks Bridget about her boyfriend gets me every time.

7. "She was very frightened. She's only just had her ovaries done."

Poor Colin Jones decided to follow his daughter's advice of flirting during the (canceled) tarts and vicars party by trying his moves on Penny Husbands-Bosworth, only to get criticized by his estranged wife.

After Bridget discovers Daniel sleeping with Lara, he unsuccessfully uses this line to convince Bridget not to quit her job as his assistant. "Awkward as ass," indeed.

9. "Nothing can distract me from my dedication to the pursuit of truth. Well — almost nothing. Right. I'll just pop to the shop quickly for some ciggies."

Just because Bridget got a job as a TV personality doesn't mean she isn't the same old Bridget.

Perhaps my favorite line of the entire movie. Perfect for stressed out cooking situations or when you have nothing in the fridge.

Daniel says this while trying to win Bridget over (again), but understandably he got a bit distracted by her birthday dinner feast.

Tom is full of sheer joy at the sight of Daniel and Mark battling in the street and doesn't understand why not everyone in the restaurant doesn't feel the same level of excitement.

I'm going to say that the thousands of alcohol units may have had something to do with Bridget shouting at the Christmas carolers.

Pam finally realized the error of her ways with dating the "tangerine-tinted" Julian.

Bridget always knows how to make an eloquent exit.

Jude saying this to Bridget is on par with the Friends line, "They don't know that we know they know we know."

One of the rare lines that Shazza says that does not contain the word "f*ck." I wish I had her around when I was packing for international travel.

18. "I just wanted to know if you were available for bar mitzvahs and christenings, as well as ruby weddings. Excellent speech.”

Did you think I forgot about Mark Darcy?!? Of course not! Although his character isn't known for his witty repartee all the time, he mocked Bridget before giving her one of the all-time best kisses in movie history.

Now rewatch Bridget Jones' Diary in all its glory for its 15-year anniversary and never forget these quotes again.