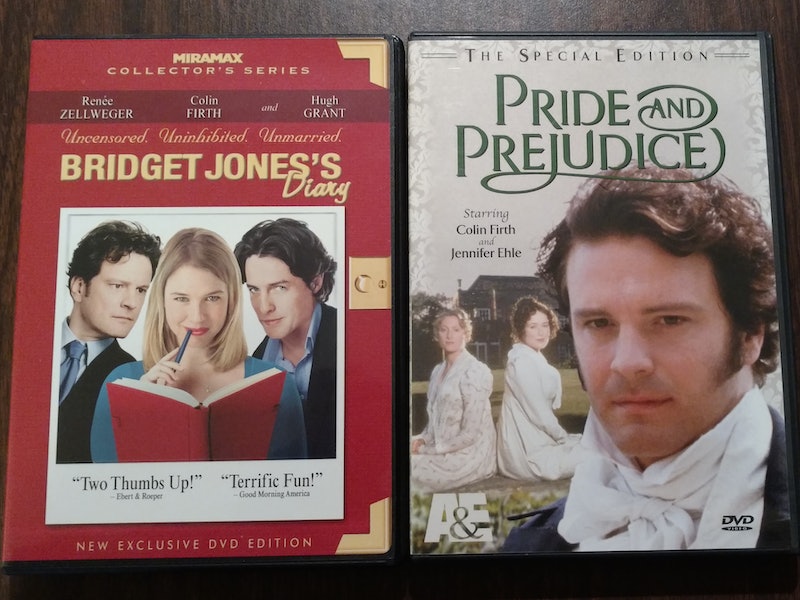 If you love the movie Bridget Jones' Diary, which turns 15 years old on April 13, 2016, then you most likely love Pride and Prejudice — and vice versa. That's because the plot of Bridget Jones' Diary is inspired by Pride and Prejudice . While the movie based off of Helen Fielding's novel is much more bonkers than Jane Austen's classic piece of literature (which does have its own hilarious moments), Bridget Jones' romance with Mark Darcy mirrors Elizabeth Bennet's romance with Fitzwilliam Darcy. And fans of any version of Darcy can't help but love Fielding's Austen-influenced masterpiece.

Bridget Jones' Diary writer Fielding told the BBC in a video interview that when she started writing her first novel about Bridget, she only had a collection of her original newspaper columns from the Independent featuring the character, but no plot. At the same time, the BBC Pride and Prejudice miniseries — starring Bridget Jones actor Colin Firth — was airing and she was "infatuated" with it. Fielding said,

"And so I just stole the plot ... and then the book increasingly began to mimic and nick stuff from Pride and Prejudice. But it's a very good plot and I thought Jane Austen wouldn't mind, and anyway she's dead."

For those who love Pride and Prejudice, you already know about the little and big references to the novel in Bridget Jones' Diary. There is the fact that Bridget works at Pemberley Press, a reference to the name of Darcy's estate in Austen's classic novel, and that Fielding stole the last name of "Darcy" for the stoic male lead.

Besides the allusions, the people who worked on the Bridget Jones' Diary movie also have connections to Pride and Prejudice. Screenwriter Andrew Davies wrote the 1995 Austen miniseries and also contributed to the screenplay for the 2001 Bridget Jones' Diary movie. And the casting of Bridget Jones is enough to make any Austen fan squeal in delight since Fitzwilliam Darcy actor Colin Firth played the role of Mark Darcy. Not to mention, the actor who portrayed Mr. Bingley in the Pride and Prejudice miniseries, Crispin Bonham-Carter, also makes brief appearances in Bridget Jones as an employee of Pemberley. You can see him during the Kafka's Motorbike launch in a conversation with author Salman Rushie and when Bridget quits.

Since Fielding unabashedly admitted to stealing Austen's beloved plot, let's get back to business and compare the two stories that were written nearly 200 years apart. While Lizzy will never be as wacky as Bridget, the parallels between the stories of two of my favorite heroines are hard to deny.

1. A Bad First Impression With Darcy

An earlier version of Pride and Prejudice was titled First Impressions , which really highlights the importance of the first meeting between Elizabeth and Darcy, and also pertains to Bridget and Mark. Instead of meeting at a turkey curry buffet, Elizabeth and Darcy first met at a ball where Elizabeth overhears Darcy saying about her, "She is tolerable, but not handsome enough to tempt me" along with other disparaging remarks. While Mark and Bridget had met as children when she played in his paddling pool naked, their adulthood relationship began with a rough start when Bridget overheard Mark saying he didn't need a blind date with "some verbally incontinent spinster who smokes like a chimney, drinks like a fish, and dresses like her mother." It's amazing how much I love any version of Darcy when his character always starts off as such a jerk.

The details differ significantly when it comes to George Wickham and Daniel Cleaver, but the general premise is the same. In Pride and Prejudice, Elizabeth enjoys Mr. Wickham's company — although nothing truly romantic ever goes down between the two — and he tells her how Mr. Darcy ruined him financially by not keeping him employed on the Pemberley estate as the clergyman. Daniel tells Bridget that he and Mark were friends from Cambridge and that Mark had an affair with Daniel's fiancée. Of course, both Wickham and Daniel used Lizzy's and Bridget's already not-great opinions of Darcy to their advantage by telling these fictionalized stories. Wickham really broke Darcy's younger sister's heart and Daniel really slept with Mark's wife. Besides their lying ways, both characters continue to be philanderers in both stories, with Wickham running away with Lizzy's sister Lydia and Daniel cheating on Bridget with Lara.

3. "It Is A Truth Universally Acknowledged ..."

This is not necessarily a plot point, but I can't ignore Bridget directly quoting Pride and Prejudice. The first sentence of Pride and Prejudice is, "It is a truth universally acknowledged, that a single man in possession of a good fortune must be in want of a wife." (I used to have that quote on a T-shirt, don't be jealous.) Bridget riffs on this line when she goes to meet her mom by saying, "It's the truth universally acknowledged that the moment one area of your life starts going OK, another part of it falls spectacularly to pieces."

4. The Overbearing Mother & The Soft-Spoken Father

Speaking of Bridget's mom, both Mrs. Bennet and Mrs. Jones are pretty insufferable, though they do at least sometimes offer comedic relief. Elizabeth has a great relationship with her father and Bridget clearly gets along better with her dad than her mom. Mrs. Bennet is obsessed with marrying her five daughters off and Pam Jones is fixated on setting Bridget up. Unlike Lizzy, Bridget does get a break from her mother when Pam gets sidelined by her own crazy love life with Julian (echoing Lydia Bennet's story line). Either way, in both stories, you are grateful for Mr. Bennet and Mr. Jones.

OK, this one is cheating a bit, but can you really blame me? In the BBC version of Pride and Prejudice, the six-hour miniseries decided to spice it up by having Darcy take a dip in the water by Pemberley to cool down, even before he knew Lizzy was visiting his home. (This scene does not happen in Austen's book, but most of us aren't complaining.) In Bridget Jones, Firth took time off from the shirt-soaking department and let Hugh Grant do the dirty work. While on a mini-break with Bridget, Daniel drunkenly tries to board her rowboat and falls into the water. I cannot believe I'm about to say this, but in the battle of wet shirts, Grant wins when it comes to physique. But before my Jane Austen ladies freak out — don't worry, Firth's bath still wins overall.

Lizzy and Bridget both become utterly confounded when halfway through their stories Darcy tells them he actually likes them, despite how he has treated them in the past. Fitzwilliam Darcy told Lizzy how he loved her when she was visiting Charlotte and Collins. Mark Darcy told Bridget after a dinner party full of smug married couples. Both female characters were not onboard to fall for Darcy's change of heart since in true Darcy form, he managed to insult both characters while professing his love, among other transgressions.

In a simplification of both plots, Lizzy and Bridget eventually realize they care for Darcy when they discover he was the noble one in his interactions with Wickham/Daniel. While Pride and Prejudice the book doesn't have a big make out moment worthy of swooning, the BBC miniseries and the 2005 Keira Knightley versions do have Lizzy and Darcy kissing. (The additional final kissing moments of Knightley's Pride and Prejudice were added specifically for the American audience and caused controversy since Austen purists did not approve.) After unnecessarily worrying that Mark no longer wanted her upon discovering her diary, Mark and Bridget shared one of my favorite movie kisses ever (I even wrote a blog post about it when I was approximately 16-years-old) in the snow. Whether or not Austen would have approved of Mark Darcy's language when he responds to Bridget saying, "Wait a minute. Nice boys don't kiss like that," I know that Bridget Jones' Diary purists absolutely f*cking do.

More like this
The Biggest Differences Between 'Bullet Train' & The Book It’s Based On
By Arya Roshanian
Revisit 1992’s 'A League Of Their Own Cast' Photos After The New TV Series
By Grace Wehniainen
At 28, Lesley Manville Was Acting, Picketing, & Singing Kate Bush Songs
By Olivia-Anne Cleary
Reese Witherspoon Gave Fans Hope For 'Legally Blonde 3' After This Surprising Movie Inspired Her
By Jake Viswanath
Get Even More From Bustle — Sign Up For The Newsletter