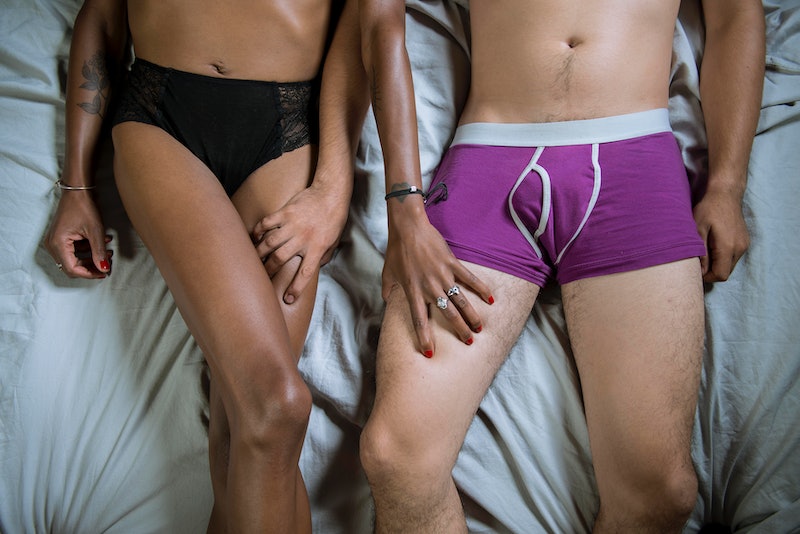 The development of Vasalgel, the new male birth control, is a big deal. But why is it a big moment for feminism? Not only will it revolutionize birth control methods as we know them today, but it’ll give women and men more freedom, and the freedom of choice, when choosing the best BC for them.

“The burden of contraception falls disproportionately on women, partly because women have several long-acting contraceptive options, though they have drawbacks including unpleasant side effects, inconvenience, and expense,” Elaine Lissner, founder and executive director of the Parsemus Foundation, the non-profit developing Vasalgel, tells Bustle. “Meanwhile, many men want control over their reproductive future — and they’re willing to share responsibility for contraception more evenly with women, especially if they can preserve their ability to produce children in the future.”

In general, birth control methods take a long time to get approved — the benefits and risks need to be assessed, they need to be tested in clinical trials, they need to get approved by the FDA, and so on. For instance, The Pill took years to get approved, and finally did in 1960. The first human trials were conducted in 1954, with larger ones done in 1956. In 1957, the FDA approved it, but not as contraception — rather, for “menstrual disorders.” Finally, though, 1960 was the year — another win for feminism when women had the right to choose whether or not to use The Pill. Still, it was the principle behind it — women went from not having such a choice, and really wanting and working for it, to having it.

For the new male birth control, Vasalgel, 2018 could be the year, assuming the human trials this year and next go as expected. In case you don’t know how it works, here’s the 411 on Vasalgel. A male gets a gel injection in his vas deferens, and it works as a barrier against sperm. Unlike a vasectomy, the vas deferens is not snipped and sealed off. Vasalgel was tested on rabbits and baboons and worked a bit more than a year, which was the duration of the testing period, in the latter. Plus, it was reversible, should said rabbit change his mind about having baby rabbits. The 2016 and 2017 human trials hope to uncover the same findings among human males. Fingers crossed.

These days, The Pill is the most popular form of contraception — since 1982! — according to the Guttmacher Institute. They found that 16 percent of American women aged 15-44 use The Pill, and female sterilization comes in second place, at 15.5 percent. What comes next in popularity? Male condoms, at 9.4 percent, IUDs at 6.4, and vasectomies at 5.1 percent.

Once Vasalgel comes out (eh, goes in), if all goes according to plan, I wonder where it will fall on the birth-control-of-choice popularity chart.

So, yep, Vasalgel is a big moment for feminism. Just like The Pill revolutionized women’s rights to have control over their reproductive health and bodies, Vasalgel will do the same thing — for both sexes — and here’s why.

1. Feminism Means That Women Should Have Equal Opportunities And Rights As Men — As Far As Birth Control Methods, Too

Women were finally able to vote in presidential elections in 1920. The Pill became available to them in 1960. And women were finally paid the same amounts as men were for the same jobs in… Oops, that last one hasn’t happened yet, but you get the idea. Vasalgel will be yet another catalyst for women to be equal to men, at least in terms of who’s primarily responsible for birth control. Yes, both people should be, but one sometimes takes the fall, so to speak, for the other — they deal with side effects from The Pill, or gets their vas deferens snipped via vasectomy. If Vasalgel comes on the market, it’ll provide more choices for couples in terms of which birth control method to use as their primary one.

For instance, if a couple has been using a hormonal birth control pill as their method of choice, yet the woman does not really like the side effects (the mood swings and spotting, to name a few), they can weigh their options and make the switch to Vasalgel. Goodbye, mood swings and hello, at least a year-long span of protected sex!

“I consider it a win for humanity,” Nikki, 27, tells Bustle. “Men have been in dire need of more control over their own reproduction, and women have had to bear the main burden of contraception, not to mention pregnancy.”

2. It Puts Less Pressure On Women And Gives Them More Control Over Sexuality

Maybe The Pill’s side effects make you sick or super emotional and your partner cannot wear condoms due to a latex allergy or erectile dysfunction. Pulling out scares you, and you certainly don’t want an IUD implanted in your body. Your partner doesn’t want a vasectomy, because you two may want kids someday and reversing it has its own set of risks. So what’s the solution? It could be Vasalgel. If anything, it’ll put less pressure on women to take The Pill even when they don’t particularly want to, but they do it because they don’t want a baby right now and they also don’t want another panic attack should a condom slip off... again.

“I am tired of taking hormonal birth control and I can’t wait until there are options out there for my boyfriend to help contribute to our mutual desire to not have kids right now,” Kim, 21, tells Bustle. “I am very excited for Vasalgel to come to the market because, right now the responsibility for taking birth control falls squarely on women’s shoulders. Sure, there’s condoms for spur-of-the-moment occasions, but for people looking for something that’s effective and long-term, the only options out there are for women. And too often, those options also include hormones, and I am sure I am not the only woman who has struggled with the side effects of hormonal birth control! We’re the ones that have to go to the doctor, we’re the ones that have to get the prescription, we’re the ones that have to deal with the side effects. Vasalgel takes some of that pressure away from us, changes the focus a little bit, includes men in this discussion more. It gets men more involved, like they should be. They will be held just as responsible if their girlfriend or wife gets pregnant, because they could have been taking birth control, too. Legislation that targets birth control would affect men as well, not just women. It’s a huge step forward for the feminist movement.”

3. It’s A Discussion Topic For Couples & Makes Both People Responsible

Vasagel puts birth control in the guy’s court — and body, as it were — so females will have the ability to stop taking The Pill (finally) if they so choose. Yep, when and if Vasalgel becomes available, heterosexual couples can choose birth control methods together. All’s fair in love and sex, right? “I think it is very interesting and will open the sexuality discussion of responsibility for contraception,” Dr. Michael Krychman, MD, OBGYN, Sexual Medicine Gynecologist and the executive director of the Southern California Center for Sexual Health and Survivorship Medicine, tells Bustle. “I will certainly entertain the discussion with both my male and female patients with this novel male contraceptive.”

Yep, it’s all about the right to choose and control over that choice. “I think that Vasalgel could have a similar — albeit smaller — impact on feminism as hormonal birth control (HBC) had when it was first released,” David, mid-30s, tells Bustle. “HBC gave Women a level of unprecedented control over their reproduction, but as society adapted, it also placed the bulk of the burden of contraception onto women. Vasalgel has the potential to free women from that burden — particularly in situations where either cost or regressive laws may limit access to HBC — thereby eliminating one of the more persistent domestic inequalities that women suffer.”

The Parsemus Foundation started developing Vasalgel in early 2010. For over 15 years now, another polymer contraceptive, RISUG®, has been used in India, and that’s in clinical trials there now, so it’s about time that polymer birth control method comes out for the rest of the world.

“It’s a big moment for feminism because medical science has a very long history of making women’s bodies the object and problem of its research, and just brushing aside these side effects,” Declan, 33, tells Bustle. “I know from talking to medical science colleagues that male birth control research is not viewed as being as prestigious as female birth control. Really, Vasalgel should have been on the market decades ago but the patriarchal medical establishment has de-prioritized it.”

6. It’s A Win-Win For Everyone Involved

Everyone wins. “I don't think it's a victory for feminism, I think it's a victory for men,” Byron, 27, tells Bustle. “Men have had no options except for condoms, and with this choice, men know have a bigger say in their own parental protections, without having to go with permanent sterilization as a legit option. I personally can't wait! I think it's going to be a new wave of birth control and it will really change the playing field from ‘How can I prevent pregnancy?’ to ‘How can 'we' prevent it?’”