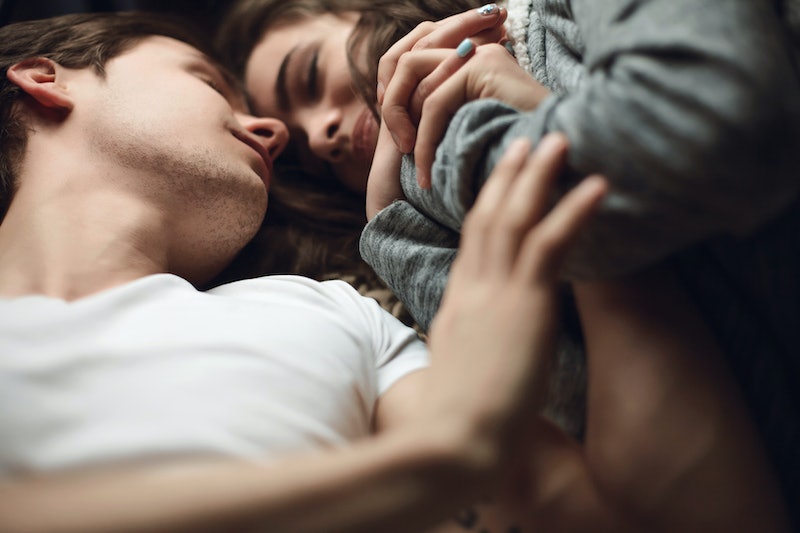 Vasalgel… Va-sal-what? By now, you may have heard that a male form of birth control, Vasalgel, is coming soon to a bedroom near you (woo-hoo!). But how does Vasalgel work? What do you need to know about Vasalgel? It’s not like The Pill — in fact, no pills are involved — and it’s also not like the condom — since no latex or lamb skin is involved, either. Rather, it’s a polymer hydrogel that’s injected into the tube that sperm go through — aka the vas deferens. (Yep, we’re back in Health Class.) So, the sperm are blocked. Think of a sport, like football. Basically, the gel is the defense to the aggressive sperm trying to score. (Pun intended.) The sperm are too big to get through the gel and, as a result, they’re reabsorbed into the body. Fascinating, huh?

“Vasalgel takes a different approach, stopping sperm in the tube they swim through, rather than hitting the whole body with hormones,” Elaine Lissner, founder and executive director of Parsemus Foundation, tells Bustle.

The Parsemus Foundation started developing Vasalgel in early 2010. For over 15 years now, another polymer contraceptive, RISUG®, has been used in India, and that’s in clinical trials there now, so why not a polymer birth control method for the rest of the world?

“I think it is very interesting and will open the sexuality discussion of responsibility for contraception,” Dr. Michael Krychman, MD, OBGYN, Sexual Medicine Gynecologist and the executive director of the Southern California Center for Sexual Health and Survivorship Medicine, tells Bustle. “I will certainly entertain the discussion with both my male and female patients with this novel male contraceptive. I tend to want to completely examine the data for safety and efficacy.”

Here are eight key things you need to know about Vasalgel.

1. It’s Injected, Not An Oral Contraception Or Condom

Since Vasalgel is not an oral contraception or condom, what does this mean for you? No hormones or no condom slip-ups. A guy’s seminal fluids will still be released, but the sperm won’t be. (Remember that aforementioned football analogy!)

2. It’s For Men Only, So The Ball’s In Their Court

“Women have multiple options (each with its own drawbacks), but right now there’s nothing out there both reversible and highly reliable for men,” Lissner says. “Condoms are important in new relationships, but they’re often used inconsistently and are unpopular among long-term couples. Clearly, we need an effective, long-acting, reversible option for men. Many men are excited about Vasalgel because it could be that option, without the hormonal side effects women put up with.”

It’s reversible?! If someone decides it’s time to have kids or wants to switch methods of birth control, he can get the Vasalgel removed — via flushing it out with an injection of sodium bicarbonate (baking soda) solution... theoretically. Again, fascinating, huh? In rabbits, sperm quickly started swimming again once the Vasalgel was removed, yet more studies need to be done with larger animals and men before its reversibility can be confirmed.

4. In The Meantime, Vasalgel Is An Alternative For The Vasectomy

Since the above reversibility studies still need to be done, for now, Vasalgel “should be thought of as a vasectomy alternative,” according to the Parsemus Foundation website.

5. What’s The Difference Between Vasalgel And A Vasectomy Anyway?

Basically, with Vasalgel, the vas deferens isn’t cut. Though vasectomies can be reversed, doing so can be complicated (and highly expensive), as well as possibly increase the risk of birth defects. So, once Vasalgel’s reversibility is confirmed with further studies, it will be a lot easier to reverse than a vasectomy.

6. Vasalgel Works For About A Year… At Least In Rabbits And Baboons

The injection procedure is quick, there are no daily pills to take, and it may last at least a year. For 12 months, Vasalgel was studied with rabbits, and the studies revealed no sperm (at least, not from the second semen sample onwards). Vasalgel also worked for baboons for just over a year. “We don’t know yet how many years the effect will last for Vasalgel; upcoming research will help produce those answers,” the Parsemus Foundation said on their website. So, once the human trials begin, it will be determined how long an injection of Vasalgel will last.

7. Vasalgel May Revolutionize Birth Control As We Now Know It

Yep, Vasalgel has the potential to change birth control as we now know it. “The burden of contraception falls disproportionately on women, partly because women have several long-acting contraceptive options, though they have drawbacks including unpleasant side effects, inconvenience, and expense,” says Lissner. “Meanwhile, many men want control over their reproductive future — and they’re willing to share responsibility for contraception more evenly with women, especially if they can preserve their ability to produce children in the future.”

At the moment, Vasalgel is still in animal testing, but small human trials are supposed to start in 2016, and larger human trials in 2017. Assuming those are a success, Vasagel could be on the market in 2018. “About half the pregnancies in the U.S. are unintended, but we don't see Big Pharma putting resources into providing truly revolutionary options — it’s mostly ‘me too’ repackaging of hormones,” says Lissner. “We're developing Vasalgel as a social venture, with the goal of making it available and affordable to as many couples as possible worldwide, and we’re optimistic we can do it with the public’s continued support.”