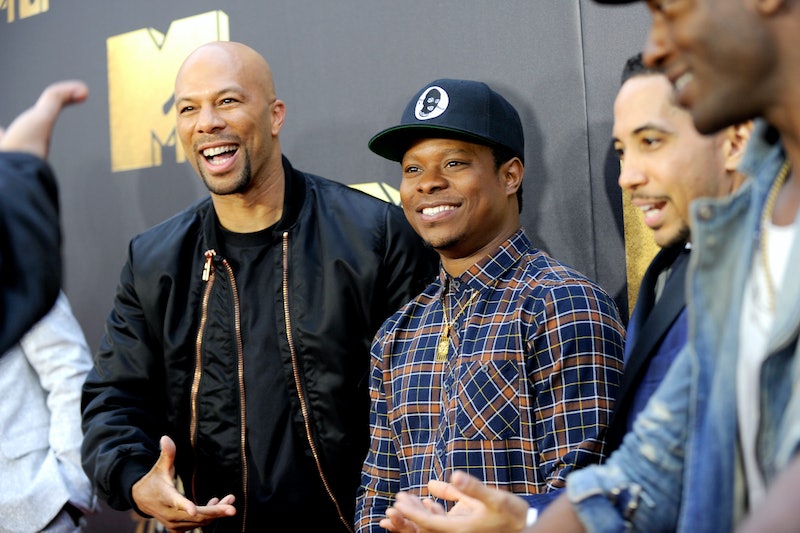 One of the ways the MTV Movie Awards distinguishes itself from other awards shows is with some unconventional categories, like Best True Story. But viewers should be thankful it was featured, since Straight Outta Compton winning Best True Story was a standout moment from the show, which was pre-taped on Saturday. Compton was the obvious frontrunner in the category, but it had previously generated some controversy when it was snubbed by the Academy Awards, which had a serious lack of black nominees. The fan-voted MTV Movie Awards represented an opportunity for the public to honor a film they loved — and they did. Star Jason Mitchell then referenced the #OscarsSoWhite controversy when he accepted the award, and it was the perfect way to comment on it without taking away from the prize he had just received.

Mitchell, who portrayed rapper Eazy-E in Straight Outta Compton, made a quick joke that hit perfectly: "I'd just like to take a moment to thank the Academy... I mean, MTV. I'm sorry. I'm sorry! My bad!" he said. Mitchell and Corey Hawkins, who played a young Dr. Dre, told Josh Horowitz on the red carpet that they weren't shocked that Compton was such a success. "I feel like I can say it now," Mitchell joked. But the win was also a serious win for the film, and the rest of the speech was pretty serious too. Actual NWA member DJ Yella was on hand to give a shout out to his bandmates, who were just inducted into the Rock & Roll of Fame, including the late Eazy-E.

Mitchell genuinely thanked MTV after his opening joke. "This is a big deal, y'all been pioneers for NWA," he added. O'Shea Jackson, Jr., who played his father, Ice Cube, in the film, added that Compton speaks to "so much beyond music, it really speaks to brotherhood." In an inspirational moment, he finished his speech with a call to the audience to surround themselves with good friends and always work hard. "Look at the people around you [...] the people around me really support and motive me."

The moment was even more exciting because rapper Kendrick Lamar presented the award to the Straight Outta Compton stars. Since he's picked up where NWA left off by making important statements with his music, like his racially charged performance at the Grammy Awards, Lamar was the perfect choice to present this category. Between his presentation and Mitchell's joke, Straight Outta Compton finally got the kind of attention it deserved throughout awards season at the 2016 MTV Movie Awards.