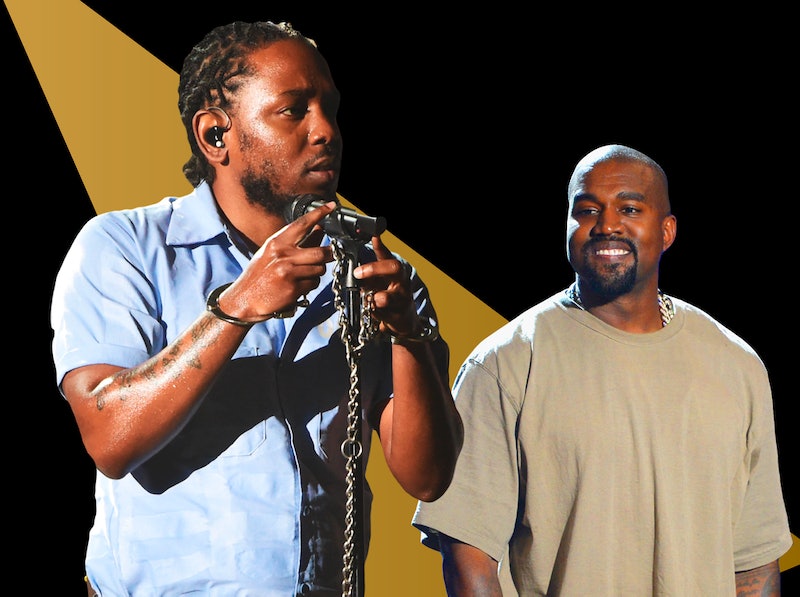 When it comes to ceremonies as highly-viewed and entertaining as the Grammys, it can be hard to imagine being able to summarize the scope and span of it to someone else. Like, if you don't watch the Grammys, then how can you truly understand the Grammys? And, if you did tune in to the 2016 Grammy Awards, then how can you claim that you can sum up everything that happened over those few hours? While it might seem impossible, there was one tweet from the 2016 Grammys that everyone needs to see. Not just because it's absolutely true as far as I'm concerned, but because it literally defines the ceremony this year in a way that will become immediately obvious to you whether you tuned in or not.

If you've been anywhere near a computer in the last week, or, heck, in the last few years, and have ever heard of Kanye West, then you know how grandiose the rapper's feelings about his artistry can be. In the last week, surrounding the release of his album The Life of Pablo, West has made a series of lengthy Twitter rants about his music, the state of the industry as a whole, his art, and his creative genius. (And Taylor Swift, but that is neither here nor there.) This isn't unusual fare for the rapper, but, in one single, powerful performance at the Grammys, Kendrick Lamar proved to the world what true artistry means. So much so that one Twitter user felt the need to make the comparison that everyone was too shy to make.

I'm not saying that Kendrick Lamar is a better rapper than Kanye West. I'm not saying that Kanye West is a better rapper than Kendrick Lamar. I'm not even going to make a judgment call about which one is a better performer, because they are both very talented at putting on a show, and I don't like to pit men of color against one another in a race that is already difficult for them to win as individuals. However, whatever the real intention behind this tweet, the message that I drew from it is a simple one. Lamar is the artist that West wishes he could be because he lets his music do the talking. He racked up 11 Grammy nominations, and of course he said in the weeks leading up to the ceremony that he wanted to win all of them, but he won something else tonight.

He won the respect of anyone whose respect he didn't already have. He won the admiration of the people who tune into the Grammys expecting the same old same old and don't really expect to be blown away by much anymore. More than that, he allowed the black people in the audience to feel unified and awed and represented in a true and positive way that is hard to come by on programs as highly watched by America as the Grammys. No one can deny that Lamar's performance was legendary, and that it delivered a lot for people to talk about. His performance was art. It was epic. It established him as a creative genius in the minds of anyone who still doubted that. And, above all else, it did that without Lamar having to rant on Twitter about his genius and his art and how underappreciated both are.

At the end of the day, Kanye has become known just as much for his outrageous statements and erratic behavior as he is for his art, and that's not a good look for his career. Meanwhile, Lamar's talent overshadows everything else, rather than being overshadowed by everything else. Kanye speaks out, but Lamar stands out. And this tweet hit that nail on the head.