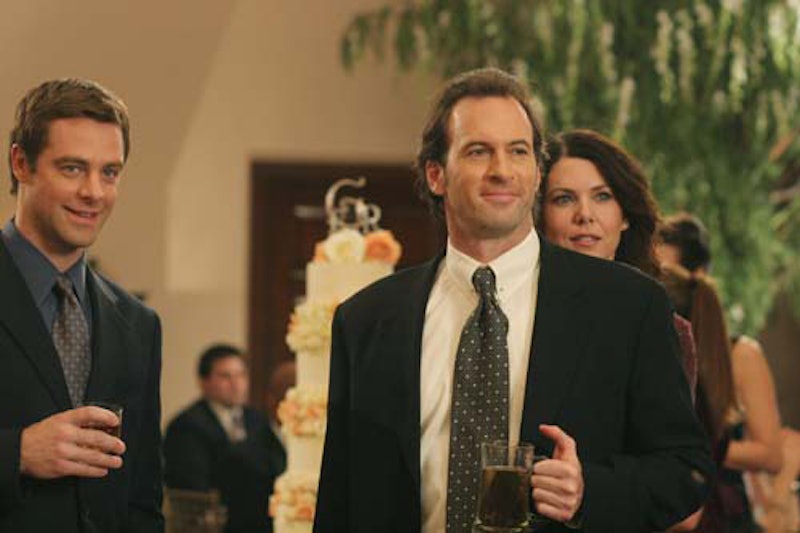 Fun Gilmore Girls fact: Rory's first dance, her society debut, and Richard and Emily's vow renewal all have one thing in common: Their location. And now, On Location Vacations is reporting the Gilmore Girls is heading to The Ebell Club once more to film scenes from April 12 to April 15. You will recall from the show's previous visits to The Ebell Club that it is a pretty swanky locale. It was a place deeply connected with the society world Emily and Richard inhabited, as evidenced by its frequent use for functions where the Hartford elite would gather. Now, I have to wonder: Why would the revival be heading back to such a fancy place unless there is a major event happening?

The first thought that comes to mind is The Ebell Club will play host to the revival's mysterious wedding. The prop photos that tipped fans off to the big event certainly looked like the sort of gorgeous decorations that would fit right in at the Club. A wedding is not the only option though: This location has a varied Gilmore Girls history and any major event could bring the Gilmores to the Club, and not every event is a happy one.

Here are just a few reasons why the Gilmore Girls revival could be filming at The Ebell Club.

A Memorial For Richard

The revival is set to pick up a few months after Richard's death, but it is possible Emily has put off holding a memorial service for her late husband. Losing Richard had to be crushing and in the wake of his death, the Gilmores may have opted for a solemn, private event. After some time has passed, the Gilmore women may decide to honor Richard with a less somber event, one that would bring all of his friends and family together to tell stories and toast to his beautiful life. This could explain why Jason "Digger" Stiles and Christopher are both slated to make a comeback, given they were both connected to Richard.

Would these scenes be heart-wrenching for the fans and the cast? Absolutely, but they would also offer a fitting sendoff to Richard and actor Edward Herrmann.

Thanks to Entertainment Weekly's in depth story on the revival, it has been revealed that Luke and Lorelai might be once again engaged, so here's hoping those two finally make things official. Now, the big question is would Luke and Lorelai really opt for such a grand venue to say their "I do's" in? Their roots are in Stars Hollow, and if they are going to get married anywhere, I feel like it would be in the town. The only possible reason I could imagine for the ceremony taking place in Hartford is because Lorelai feels a connection to the place because that is where Richard and Emily renewed their vows.

Even that is a long shot though because the ceremony was the site of Luke and Lorelai's first breakup. That is not exactly a memory the happy couple would want dancing in their heads on their wedding day.

There has been a ton of speculation that Rory may end up married by the end of the revival, and if she does and if the groom is Logan, then of course they would get married at the hot spot for Connecticut's elite. Given all the new information that has been revealed about the transient state of Rory's life, she may not be walking down any aisles anytime soon though, but her ex Logan could be. An invite to his wedding could create an interesting situation for Rory, especially since he proposed to her in the Season 7 finale and she turned him down. A Rory Gilmore, this could have been your life moment would be fascinating to watch.

Another possibility? A flashback to Richard and Emily's first wedding. If Sherman-Palladino wants to completely destroy the audience, then seeing a very young Emily and Richard getting married would definitely accomplish her mission.

The first look photos from the show seem to reveal Rory is teaching at Chilton. If she is, then she could also end up chaperoning a Chilton dance, keeping a watchful eye over the next generation while she also thinks about the direction her life has taken. A Chilton reunion is a distinct possibility as well. A reunion could be how Rory's gets a gig as a teacher in the first place. Either way, this is a location that holds a lot of history for Rory and seeing her back in such a familiar setting would be the perfect way to drive home Rory's current state of mind.

Whatever event takes the show back to The Ebell Club it is sure to be just as memorable as the show's previous events at the Club. In other words, prepare for laughs, tears, and a whole lot of drama.