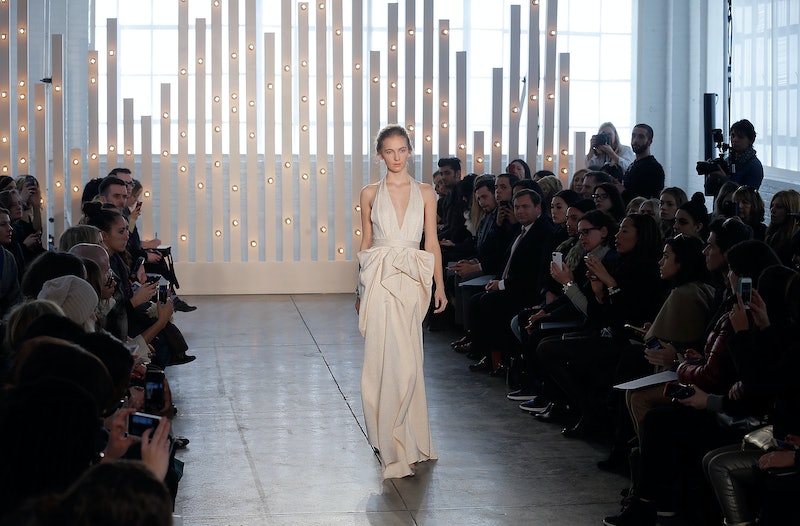 Slow clap for fashion's nascent conscience. It looks like New York Fashion Week is seeing a significant decrease in the under-18 model set.

As we reported last week, New York State passed some pretty significant legislation last November, classifying models under 18 as "child performers," which means designers must fill out paperwork and abide by certain restrictions if they want to work with younger models. (Examples of those restrictions include a 12 AM curfew and 12 hours of rest between shifts.) The law also implemented fines for designers who fail to listen. However, many expressed skepticism that about the law's level of enforceability — fashion has previously had something of a don't ask, don't tell policy about models' ages — as well as the fairly cheap fines ($1,000 for a first offense might be hard for indie designers to cough up, but it's a drop in the bucket for Marc Jacobs).

Thankfully, casting directors are seeing far fewer under-18 models this week than they have in years past. The New York Times reports that of the 350 models casting director James Scully (Jason Wu, Derek Lam, Tom Ford) considered, only three were under 18. Before this year? The under-18 set comprised about 60 percent of the models Scully looked at.

Last spring, the Times hypothesized that using "older models" would change our cultural body image ideals; i.e., we'd see less of those stick-straight prepubescent figures on the runways and more grown women with developed curves. However, these "older" models are merely in their early twenties, and a quick look at recent shows proves that the tall, straight figure is still en vogue this year. As Scully told the New York Times, "A lot of these girls were really ranging between 20 and 24 years old, and I didn’t find the aesthetic looked any different from when they were 15." So while that the models are older, an untrained eye probably wouldn't be able to tell.

It's naive to expect that this law will enact some grand, sweeping shift in cultural preferences; it is, however, extremely encouraging to see that a notoriously cutthroat industry is finally protecting its young.