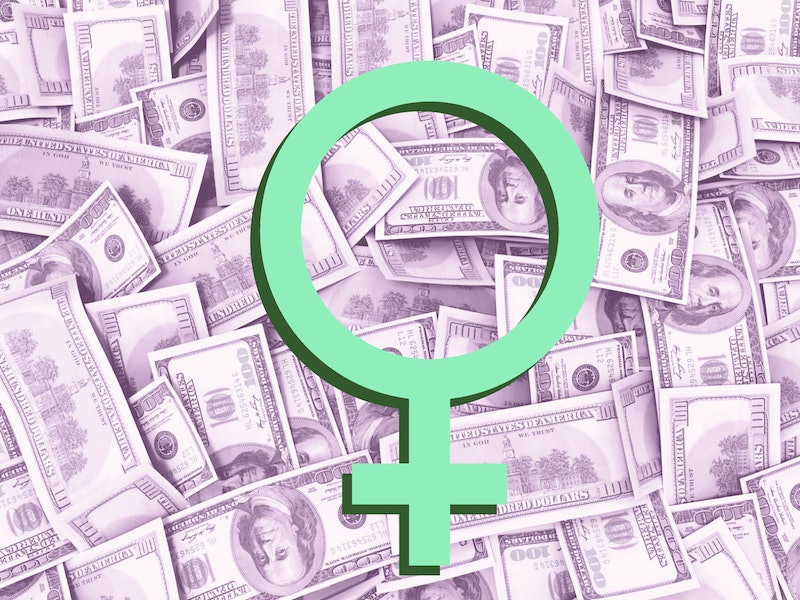 April 12, 2016 is the twentieth annual Equal Pay Day, a holiday designed to create awareness about the pay gap between men and women in the United States. Equal Pay Day doesn't fall on the same day each year, and its date is not picked at random — rather, the day we observe Equal Pay Day marks how far, on average, women had to continue working into 2016 in order to earn what men earned in 2015 alone. While it's certainly not a holiday that has anyone jumping for joy, it's a great opportunity to discuss the reality of the wage gap. We're all familiar with the general statistic that women earn 78 cents for every dollar earned by men, but still, many people love to dismiss the wage gap as a "myth." They're quick to blame the income imbalance on factors like women choosing lower-paying professions and taking more time off from work to care for their children or other family members. But these factors alone simply cannot explain the reality of pay inequality in the United States.

A great deal of research proves that the wage gap is a very real problem that affects women in nearly every profession — from secretaries to teachers to lawyers. And, despite the fact that women now obtain undergraduate and graduate degrees at higher rates than men, improvements in the gap are moving at an excruciatingly slow speed.

While the complexities of the wage gap extend far beyond the 78 cents statistic (including the reality that for women of color, the wage gap is much larger), the bottom line is that it's all too common for women to be compensated less than men who are doing the exact same work. Research also sheds light on extremely troubling patterns of racial discrimination-based wage gaps — and this applies to both men and women of color.

So the next time someone tells you that the wage gap is an antiquated myth, here are five statistics that are impossible to argue with:

1. The Pay Gap Has Barely Moved In The Past Decade

The American Association of University Women reports that the pay gap has barely moved in the past decade. In fact, according to the National Committee on Pay Equity, the pay gap only closed two points between 2004 and 2014 — from 76.6 percent to 78.6 percent.

The Institute for Women's Policy Research tracks the pay gap closely and has found that, if progress continues to move at the same excruciatingly slow pace as it has for the past 50 years, women will not reach parity until 2059.

2. It Affects Women In Nearly Every Occupation

When the wage gap debate arises, one of the most common arguments is that women gravitate towards lower-paying professions, therefore the dollars to cents comparison is an inaccurate reflection of whether or not women are compensated fairly. So, let's take a closer look at how men and women in the same professions are compensated. Seventy percent of middle school and elementary school teachers are women — but, in that position, women earn a median of $956 per week compared to a median of $1,096 for men.

Other examples include retail sales, where women earn 70 cents for each dollar a man gets; female full-time lawyers bring home 83 cents compared to every dollar earned by male full-time lawyers. Another study found that women with the title of "technical director" earn approximately $97,817 per year while men with the exact same title bring home an annual salary of nearly $138,000 per year. Amongst accountants, the annual salary gap is $32,578.

In 2014, The Bureau of Labor Statistics conducted extensive research of 535 occupations. They found that women earn less than men in every profession except stock clerks and order fillers.

3. The Pay Gap Is Even More Severe For Women Of Color

Although the pay gap affects almost all working women, it is especially bad for Latina, African American, American Indian, and Native Hawaiian full-time female workers. In 2014, Latina women's annual salaries averaged just 54 percent of what white men in the same jobs brought home. When we look solely at the salaries of people of color, the pay gap is smaller — but only because men of color are paid less than non-Latino white men. Furthermore, white women earn more than African American and Latina women who have the same level of education — so the pay gap is a racial discrimination issue, too.

4. Education Hasn't Been Enough To Close The Gap

According to a report from the White House Council of Economic Advisers, women obtain undergraduate and graduate degrees at higher rates than men — but those higher education levels haven't served as an equalizer when it comes to pay. When men and women enter the workforce with comparable levels of education, their starting salaries are similar, but the wage gap rears its head within the first five years of employment and it continues to widen. By the time men and women with the same degrees are in their late 30s, men earn about 50 percent more than women. One factor could be gender discrimination in the workplace — according to the Pew Research Center, 18 percent of women report gender discrimination, compared to 10 percent of men.

5. It Impacts Women's Ability To Pay Off Student Debt

The debt repayment gap has many ramifications. The AAUW notes that it makes it harder for women to save for retirement and invest in a home. And it can be damaging career-wise because it limits a woman's ability to take risks, like starting her own business or switching job industries — these moves can have a huge payoff in the long run, but they can't be done without a certain measure of financial stability. It's a vicious cycle, because it prevents women from making career moves that could help close the pay gap.

I don't think any of us want to wait until 2059 to reach pay parity — and, with so much research available, there's no excuse to deny the reality of the wage gap. I wish I lived in a world where I didn't have to argue with people over whether or not the gap actually exists, but since I do, it's helpful to provide them with hard numbers and statistics. When people acknowledge the complexities and ramifications of the gap, we'll be in a better position to work towards making it a thing of the past.

More like this
Amanda Gorman Shared A Powerful Message On Meghan Markle’s Penultimate Podcast
By Darshita Goyal
Claire Foy & Rooney Mara Revisit A Devastating Tale In 'Women Talking'
By Bustle UK
An Open Letter To The Person Who Bought Steve Jobs’ Birkenstocks For $218,000
By Ginny Hogan
8 Money Saving Experts To Follow For Accessible Advice
By Maxine Harrison
Get Even More From Bustle — Sign Up For The Newsletter