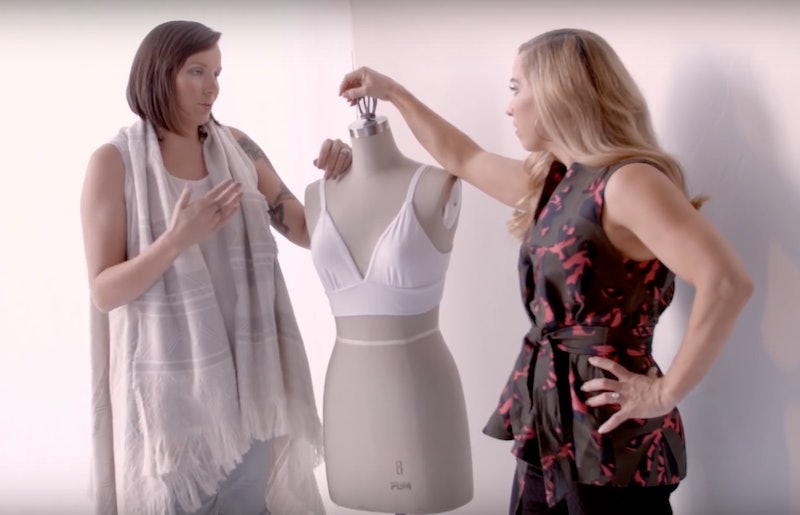 When Dr. Katie Deming realized that her patients with breast cancer were struggling to find bras to fit their specific needs, the Portland, Oregon, radiation oncologist decided to do something about it. She developed a line of lingerie for breast cancer patients undergoing radiation therapy. Created in partnership with lingerie brand AnaOno, the line features bras and camisoles designed to be gentle on hypersensitive skin, while still managing to be feminine and pretty at the same time.

According to the American Cancer Society, radiation therapy is typically used to prevent cancer from returning in patients who have had breast-conserving surgery. Although radiation treatments themselves are painless, they have a number of painful side effects, including extremely sensitive skin. Deming explained to Jordan Rosenfeld at Mental_Floss, “Radiation causes swelling in the breast by stimulating blood flow to the area, so it feels swollen, and like a bad sunburn.” The effect is so strong that patients are often unable to wear normal bras. Deming said that, while training as a resident, she was told to advise women undergoing treatment to go braless, but she found that, in practice, that didn’t really work. She said, “The brushing of even a soft cotton T-shirt against the breast, against irradiated skin, is excruciating.” Radiation therapy usually lasts between three and six weeks, but the side effects, including skin sensitivity, can last a lot longer.

There are already bras and camisoles designed for breast cancer patients on the market, but when Deming checked them out for herself, she was unsatisfied. She said in a video about the new line, “I realized that all of them were cut in ways that were going to cause irritation … and the materials weren’t right. … They were materials that were going to feel really irritating against the skin.” Further, she found that the way that these products were designed served as a glaring statement to breast cancer patients that their bodies were no longer suited to beautiful lingerie. “Looking at these garments, I realized that no woman would want to wear these bras and camisoles. They were very medical,” she said, recalling an experience of shopping for bras for breast cancer patients in a lingerie department. “And all those beautiful bras that I had just walked past, those weren’t for me.”

After working on creating bras and camisoles for patients undergoing radiation therapy for a number of years, Deming partnered with Dana Donofree, breast cancer survivor and founder of AnaOno Intimates, a lingerie company that sells garments for women who have undergone surgery for breast cancer. “When I launched AnaOno, my focus was on women who had had reconstructive surgery, because I was living with that body,” Donofree told TODAY. Her cancer treatment didn’t require radiation, so initially AnaOno wasn’t targeted at women dealing with side effects of radiation. By partnering with Deming, Donofree is widening the scope of cancer patients and survivors that AnaOno can serve.

With Deming, AnaOno is launching MakeMerry, a collection of two bras and a camisole specifically designed to suit the needs of women dealing with radiation therapy. The garments are made of a very soft blend of spandex and modal. There are no wires, and seams and elastic are kept away from the skin to avoid irritation. AnaOno has the MakeMerry line available for pre-order now; garments will be ready to ship in May.