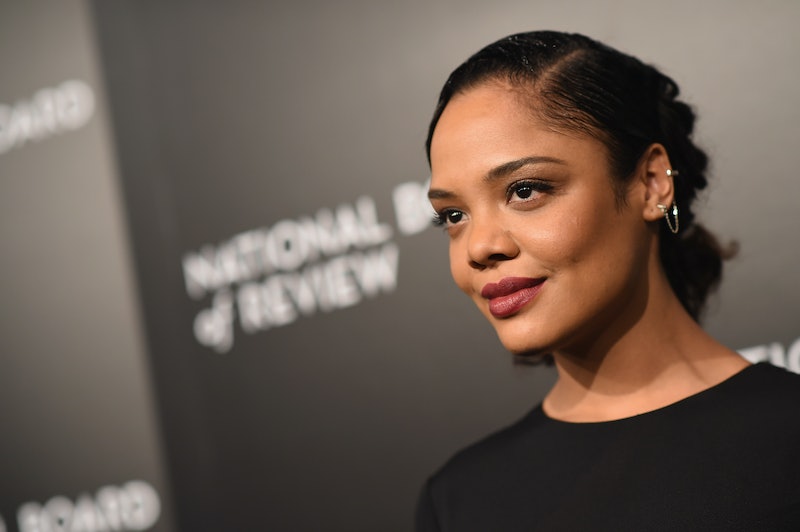 Things will look a little bit different the next time Thor hits the big screen. Although the mighty thunder god is sitting out this May's Captain America: Civil War, having departed Earth after a terrifying vision in Avengers: Age Of Ultron, the mighty thunder god will be back in full force for his next solo film in November of 2017. But when that sequel hits theaters, it will be missing one of the Thor movie's key ingredients: Natalie Portman as scientist/love interest Jane Foster. Instead, Marvel Studios is recruiting Creed actress Tessa Thompson for Thor: Ragnarok , as the female lead in Portman's place, according to Deadline.

Thompson will be joining franchise veterans Chris Hemsworth as Thor, Tom Hiddleston as Loki, and Mark Ruffalo as Bruce Banner, as well as newcomer Cate Blanchett as Hela, the Asgardian goddess of death. Although Deadline declined to offer the identity of Thompson's character, the report did offer a few hints: she will be playing Thor's "love interest," she will "be a kind of superhero," and she "will appear in other Marvel films as well."

So given these hints (love interest, superhero, potential for a recurring role in the Marvel Cinematic Universe), can we guess who Thompson might be playing in Ragnarok? These five characters seem like the likeliest possibilities:

This character — who has gone by various aliases, including Captain Marvel, Photon, Pulsar, and most recently Spectrum — is arguably the most famous black female superhero in the Marvel comics stable outside of the X-Men's Storm. Monica Rambeau first appeared in 1982 in the pages of The Amazing Spider-Man; she was a harbor patrol officer in New Orleans when she was exposed to some extra-dimensional rays, granting her energy-based powers. Since then, she had her own run as Captain Marvel, and even served as the leader of the Avengers for a time.

The only problem? Monica and Thor don't share many significant storylines, which would make her introduction in Ragnarok pretty random.

Of course, Thompson doesn't necessarily have to be playing a "black" superhero. While it may seem strange to think of her portraying a Norse goddess, consider the fact that the Thor movies already cast Idris Elba as Heimdall. So if we're looking for a character that would make sense to introduce in a movie alongside Thor, then it'd be hard to go wrong with Valkyrie. There are two versions of this character: the original, Brunnhilde, who was the leader of a group of warrior goddesses whose

it was to decide which mortals slain in combat were to be ushered to Valhalla; and the Ultimate version Barbara Norriss, a 19-year-old superhero fangirl granted powers by Loki.

Other than Loki, immoral Asgardian Amora — aka Enchantress — is perhaps Thor's longest-running nemesis. Yes, Cate Blanchett is already playing Ragnarok's big bad, but that doesn't mean there isn't room for more than one character who's up to no good… especially if Enchantress survives to wreak havoc in more Marvel movies down the line. This would be a plumb role for Thompson, and there's reason to believe she'll don the iconic green costume: one of Enchantress' first appearances was when she was sent by Odin to kill Jane Foster, who he viewed as a distraction to Thor. Of course, in the comics Enchantress failed; but perhaps she will succeed in the MCU's version, explaining Natalie Portman's absence?

But perhaps we're looking in the wrong place for Thompson's character. After all, Thor isn't the only Marvel hero appearing in Ragnarok. The Hulk, also absent from Civil War, will be fighting alongside him, so maybe Thompson's role will be more connected to Bruce Banner. In the comics, She-Hulk (aka Jennifer Walters) is Banner's cousin, a New York City lawyer, and a frequent member of the Avengers, Defenders, and other superhero groups. Of course, she and Thor never have a romance on the page, but this wouldn't be the first time the MCU fabricated an original storyline.

In 2019, the MCU will debut its first female-led solo superhero movie, Captain Marvel. That film will star a character named Carol Danvers, who is just the latest in a long list of women to don that alias — a list that includes the aforementioned Monica Rambeau. Since we know Thompson will likely be appearing in multiple MCU movies, could the studio be planning to introduce Captain Marvel in another hero's movie before spinning her off into her own solo franchise? After all, they're currently doing the same thing with both Spider-Man and Black Panther, appearing in Civil War ahead of their own upcoming films. Marvel just announced that we would learn the director and cast of Captain Marvel "by the summer." Is the timing of Thompson's casting and this announcement a mere coincidence? Maybe, maybe not…

Whoever she plays, Thompson will be the third person involved in Creed to join a Marvel movie, after director Ryan Coogler (helming 2018's Black Panther) and co-star Michael B. Jordan (who played the Human Torch in 2015's non-MCU Fantastic Four reboot). In 2017 you'll also be able to see her on the small screen as a series regular in HBO's upcoming sci-fi drama series Westworld and on the big screen in Annihilation, the newest film from Alex Garland (Ex Machina) where she'll appear alongside — ironically — Thor's Natalie Portman.