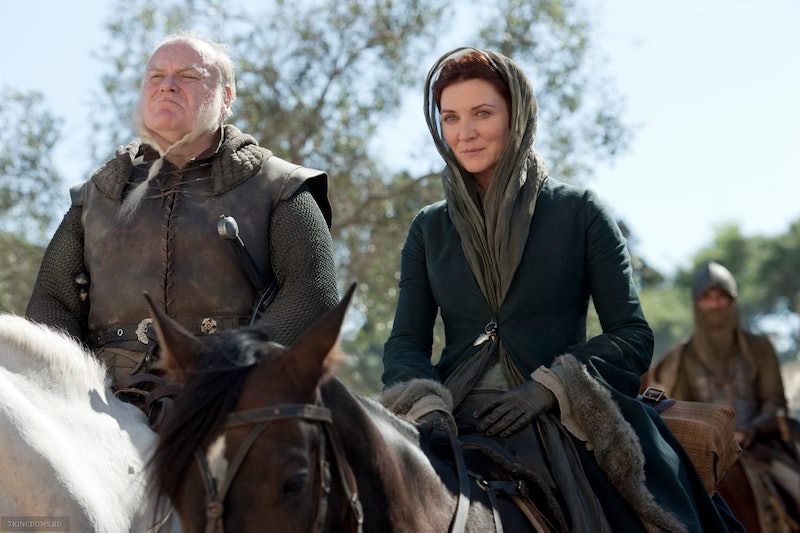 Another season, another year of everyone's favorite guessing game: When will Lady Stoneheart appear on Game Of Thrones ? Ever since the fan-favorite character — a resurrected version of Catelyn Stark who vows vengeance on all Freys and Boltons who participated in the Red Wedding — failed to show up in the Season 3 finale, viewers have been waiting (im)patiently for her to make an apperance. Two whole seasons later, and Lady Stoneheart is still mysteriously MIA. But far from accepting that the character has been cut from the show, fans have stubbornly continued to theorize on when she might finally materialize. So will Lady Stoneheart be in Game Of Thrones Season 6?

Not only is it possible — it's actually quite likely, if these rumored episode titles are to believed. According to Geekly Inc, a "trusted source" has revealed that the second and third hours of the sixth season will be titled "Home" and "Oathbreaker," respectively. (The premiere has already been confirmed to be called "The Red Woman.") And in case that doesn't sound like super reliable information, Geekly Inc's "trusted source" also correctly spoiled the first three episode titles of Season 5 last year before they were officially released by HBO.

What exactly are those titles referring to? "Home" is one of the most maddeningly vague episode titles in GoT history, but it is directly applicable to many characters' storylines: Theon returning to the Iron Islands, Dany returning to Vaes Dothrak, Sam returning to his family, Myrcella's corpse returning to King's Landing, Jon Snow returning to life.

But "Oathbreaker" is the more interesting title in this context. The title is also a callback to the Season 4 episode "Oathkeeper," which was itself a reference to the Valyrian steel sword that Jaime gives Brienne to aid in her quest to rescue the Stark girls. And that's where Lady Stoneheart comes in. Take a gander at this passage from A Feast For Crows, the fourth novel in George R.R. Martin's A Song Of Ice And Fire series:

The woman in grey gave no answer. She studied the sword, the parchment, the bronze-and-iron crown. Finally she reached up under her jaw and grasped her neck, as if she meant to throttle herself. Instead she spoke… Her voice was halting, broken, tortured. The sound seemed to come from her throat, part croak, part wheeze, part death rattle. The language of the damned, thought Brienne. "I don't understand. What did she say?"

"She asked the name of this blade of yours," said the young northman in the sheepskin jerkin.

The woman in grey hissed through her fingers. Her eyes were two red pits burning in the shadows. She spoke again.

"No, she says. Call it Oathbreaker, she says. It was made for treachery and murder. She names it False Friend. Like you."

In Season 5, both Jaime and Brienne departed drastically from their source material, with Jaime detouring to Dorne and Brienne seeking Sansa in Winterfell. Thanks to spoilers for Season 6, we know that both characters will be returning to their book plots, heading to the Riverlands where they encounter Lady Stoneheart in Martin's novels. This return to the original storyline, coupled with the rumored title "Oathbreaker," are pretty strong indicators that we'll be meeting Lady Stoneheart sooner rather than later.

It makes sense that showrunners David Benioff & D.B. Weiss would have held off so long on introducing the character. As memorable as zombie-Catelyn is, she hasn't actually done that much so far on the page. After being introduced in the epilogue of A Storm Of Swords, she's seen in one chapter of A Feast For Crows… and that's it so far. (Although who knows what Martin has planned for her in The Winds Of Winter.) Rather than shock viewers by introducing Lady Stoneheart and then disappoint them by having nothing to do with her, it makes sense that Benioff & Weiss would save the reveal for later, when they could immediately give the character more to do.

And that's not to mention the fact that showing a revived Catelyn would undoubtedly have spoiled much of the suspense surrounding the death of Jon Snow. If one Stark could be resurrected, why not another? As it is, Benioff & Weiss will be able to air Jon's triumphant return first — and then follow that up with the grisly reveal of his zombified stepmother.