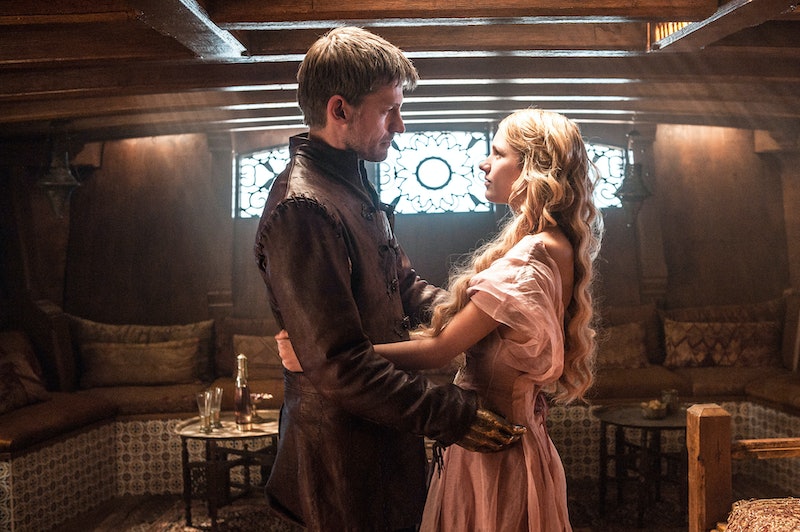 One of the strongest aspects of HBO's Game Of Thrones is its ability to shift perspectives on characters we already thought we had a handle on — and one of the best arcs in the entire series undoubtedly belongs to Jaime Lannister. Way back in the pilot, we first met him as an incestuous attempted-child-murdering bastard... but over the course of a slow and steady redemption arc, he's now a fan-favorite character that viewers can't wait to see more of. So where will Jaime Lannister be in Game Of Thrones Season 6?

That's a great question, since the show has now pretty much caught up with George R.R. Martin's source material. The author recently announced that he had unfortunately missed the deadline necessary to get the sixth book, The Winds Of Winter , published before Season 6 of Thrones premieres in April. While we don't know yet what Jaime will be up to when that book finally hits shelves, there are plenty of clues as to what he'll be up to on HBO this year.

As a New Year's present, Thrones fan site Winter Is Coming was kind enough to compile every spoiler about the new season released so far into one handy-dandy article. So here's what we DO know about Jaime's fate, according to filming reports, on-set photographs, rumors, and a little bit of speculation:

1. He'll Arrive Back In King's Landing

When Season 5 ended, Jaime and niece/daughter Myrcella were safely on their way back to King's Landing from Dorne. Did I say safely? Scratch that. In Jaime's final moments onscreen last year, his innocent young daughter succumbed to a poisonous kiss from treacherous Ellaria Sand. Needless to say, Cersei won't be too happy to hear this news when Jaime finally arrives. The queen will have gone straight from mourning her eldest son to mourning her father to mourning her only daughter. That's enough to drive anyone crazy... and Cersei was already halfway there.

Although Cersei managed to escape the High Sparrow's clutches in the Season 5 finally when she agreed to the Walk of Shame, Margaery Tyrell is still confined to a dungeon somewhere in the Sept of Baelor. It appears that one of Jaime's big actions in Season 6 will be trying to break her out, presumably on Tommen's orders. Actor Nikolaj Coster-Waldau was seen leading a large troop of Tyrell forces to the steps of the Sept — although before violence between the soldiers and the Sparrows could break out, Margaery herself walked out of the Sept wearing the garb of the Faith. Did she convert while in prison? Or is she simply pretending to appease the High Sparrow?

Thanks to a clapboard, we know this scene happens in Episode 6; so the biggest mystery surrounding Jaime is, what happens to him between his arrival in King's Landing, presumably in the first or second episode, and this confrontation in the latter half of the season?

3. He'll Head To The Riverlands

Sometime after the standoff at the Sept, Jaime will head north to the Riverlands... which book-readers know means that the show is finally adapting Jaime's storyline from Martin's fourth novel, A Feast For Crows , that the show discarded last season in favor of Jaime's detour to Dorne. The Captain of the Kingsguard spends much of AFFC traveling around Westeros, cleaning up the aftermath of War Of The Five Kings. Perhaps the fact that Thrones is going back to adapt material it had skipped over means that Season 6 won't be as full of spoilers for The Winds Of Winter as we previously thought.

Once Jaime arrives in the Riverlands, his main course of action is to lay siege to Riverrun, the ancestral home of the Tullys and one of the last remaining bastions of defiance against the Iron Throne. This sequence reportedly took six weeks to shoot and involves a large-scale battle that will presumably be featured in either the climactic penultimate episode or the season finale. The return of Riverrun (which we last visited in Season 3 for Catelyn's father's funeral) also means the return of several characters that have long been missing-in-action: Catelyn's uncle Brynden "The Blackfish" Tully (last seen leaving the Twins shortly before the Red Wedding), her cousin Edmure Tully (last seen marrying Roslin Frey), and Walder Frey (last seen gloating over the Starks' corpses). Will we finally get the justice against the Frey's we've desired for so long?

5. He'll Meet Back Up With Brienne

Of all of the show's unlikely travel companions — The Hound and Arya, Tyrion and Varys — Jaime Lannister and Brienne of Tarth remain a fan-favorite pairing for their odd couple bickering and their growing fondness for one another. Leave it to Game Of Thrones to mar their long-awaited reunion with bitterness and strife. Filming reports suggest that Jaime and Brienne's reunion doesn't last long before they get into an argument, she storms out of his tent, and goes to offer her services to the Tullys instead. What could possibly cause such conflict between the unlikely BFFs? Could it be a certain highly-anticipated "Lady"?

This one is pure speculation, but... Since Thrones is now going back to adapt the parts of AFFC that it previously skipped, could that finally (FINALLY) mean the inclusion of Lady Stoneheart, aka the vengeful, resurrected form of Catelyn Stark? Fans have waited for bated breath for her appearance for three season finales in row now, to no avail. The question has always been, did showrunners David Benioff & D.B. Weiss completely cut the character out? Or have they simply been waiting for the most opportune moment to include her?

Following her introduction in the epilogue of A Storm Of Swords, she only appears in one chapter in AFFC — that's not a lot of material to adapt. So it would make sense if Benioff & Weiss were simply holding onto her unveiling until they could do more with her, rather than introducing her and then dropping her storyline for an entire season or so. But now that both Jaime and Brienne are back in the Riverlands after their Season 5 detours, the pieces are all set for Lady Stoneheart to join the fray.

It's now or never, Thrones!