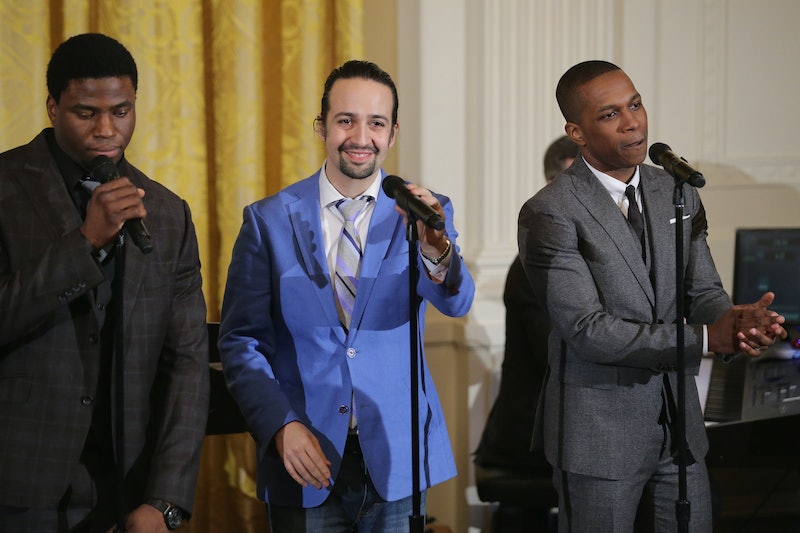 Brace yourselves, Hamilton fans. The #Hamiltome, Hamilton: The Revolution , has arrived at last. Now you can read all about the creation of everyone's favorite contemporary musical, complete with annotated lyrics, interviews, and production photos. If you don't know how to say "no" to this Hamilton companion book, you can purchase a copy from your favorite retailer today.

By now, every Hamilton fan knows what led Lin-Manuel Miranda to write his award-winning Broadway musical about the first Secretary of the Treasury. For those not in the know, the playwright picked up Ron Chernow's biography of Alexander Hamilton as a vacation read in 2008. Yes, you read that correctly. Just in case the book nerds in the audience need another reason to love Miranda, he picked out an 800-page biography to read on vacation.

Hamilton: The Revolution combines the story of the musical's rise to fame with anecdotes from the life of the real Alexander Hamilton. There are profiles of various figures and interviews with no less than Stephen Sondheim and Questlove. Miranda's annotated lyrics have received the bulk of the attention, however. From Playbill:

In the section of the text for the song “The Story of Tonight,” Miranda writes, “This was the way into Burr. I knew he and Hamilton circled each other all their lives. I knew they went from friends to frenemies to foes, but it wasn't til I read this detail online — that Theodosia was married to a British officer when Aaron Burr met her, and he waited until she was available — that the character of Burr came free in my imagination. Imagine Hamilton waiting — for anything. That's when I realized our task was to dramatize not two ideological opposites, but a fundamental difference in temperament. No easy task. But that was the task.”

Then there was the wondrously named Twitter user @cabinetbattles, whose LGBTQ-positive freak out over a possible romance between Hamilton and fellow abolitionist John Laurens turned into a freak out over being re-tweeted by Miranda himself:

If you don't have a copy yet, rise up, and get yourself to a bookstore, ASAP. While you wait for it, check out these great books for Hamilton lovers. Remember to share your favorite moments from Hamilton: The Revolution by using the hashtag #Hamiltome. Happy reading!