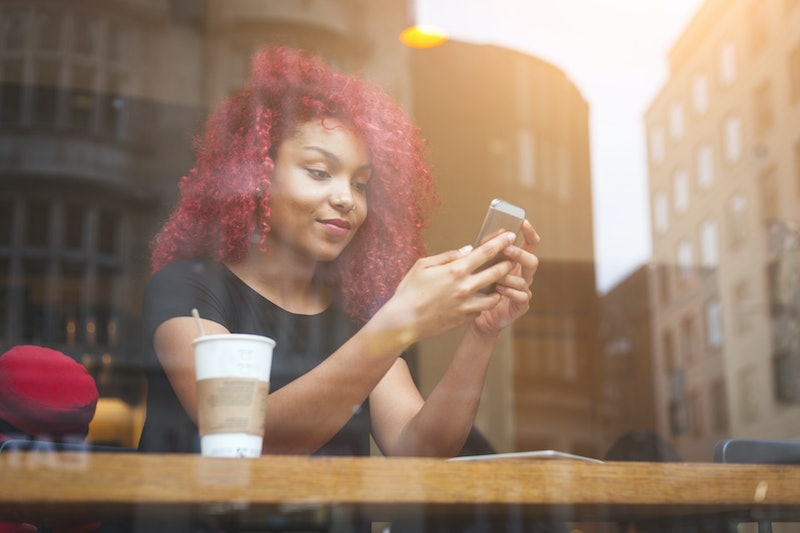 If you're a woman seeking a guy on dating apps, it can sometimes feel like there's an overwhelming amount of men on there. Maybe that's because men (and often the ones you're not interested in) send more messages than women, but it can definitely feel like they're dominating. But new research about who's on the most popular dating apps from Survey Monkey Intelligence shows that might not actually be the case. When it comes to Tinder, the most popular dating app, the good news is that it's a 50/50 split between men and women. And with over seven million monthly users, that means that there are over 3.5 million ladies swiping on Tinder. Damn. Granted, a few of those are actually couples that sign up as women and are looking for a threesome (YOU KNOW WHO YOU ARE), but still.

To me, this sounds like another reason why women should be bold and send out more messages. It's easy to be buried just in the sheer amount of people on there swiping and matching. So if you see someone you like — just go for it. If you don't get a reply, who cares? It's the Internet. There's no embarrassment on the Internet.

If you're looking to play the male/female odds though, not all apps have such an even split. There's a huge range in the percentage of women versus men on different apps. You can check out the whole list below, just in case you want to increase your odds:

Match had the highest percentage of women, with 60 percent of their two million users being female. Leaving only 40 percent of users as male, that's some competition if you're a woman seeking men. Like I said with Tinder though, it's just an excuse to get messaging.

Perhaps unsurprisingly, as it's an app where women take control via timed matches, 59 percent of users are ladies. They have to send the first message, while men have to wait to be messaged, so it makes sense more women might be signing up. For LGBT users, one person must message within 24 hours or the connection expires.

Coffee Meets Bagel was the other app Survey Monkey found with more women than men. Fifty-eight percent of users were women. But, with only one match a day, you're not going to go through those 42 percent that are male users (if you're seeking a guy) any time soon, so here, the numbers won't have too much of an effect.

OkCupid was not only the second most popular dating app after Tinder, it was also the other app that had a 50/50 split between men and women.

Hinge — the app that connects you through friends of friends and third-degree connections— was the only app that had significantly fewer female users than male users. With only 30 percent of their users being female, it's a good one to sign up for if you want to be in the minority.