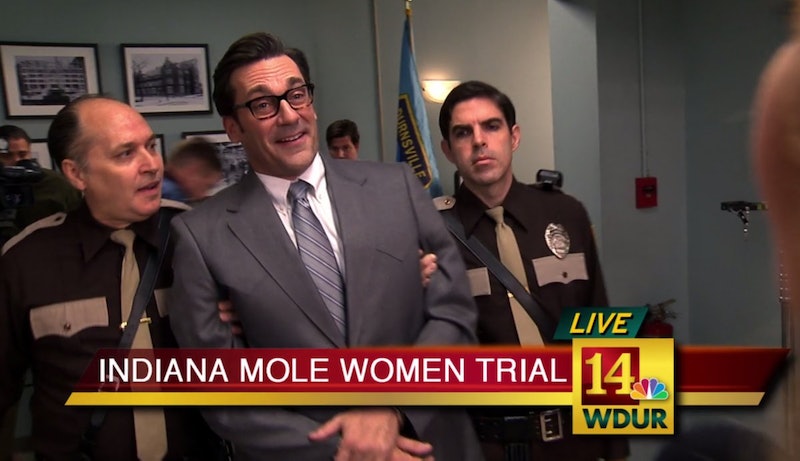 It must be hard to be working in Hollywood and keeping all of those super secret production secrets. At least, I think it would be hard because I am the worst secret keeper ever, and because there is nothing that I love more than a super juicy spoiler. But, for Unbreakable Kimmy Schmidt showrunner Robert Carlock, keeping those spoilers under wraps is just part of his job. Thankfully, though, he did reveal enough information about Season 2 of The Unbreakable Kimmy Schmidt to keep my tongue wagging, including that Jon Hamm will return to UKS as Reverend Richard Wayne Gary Wayne. And can I just say, thank you Robert Carlock, because I know I’m not alone in needing more Jon Hamm in my life. Every day without him feels like one long withdrawal, and I’m so happy to hear that he’ll be back in some capacity.

And even though Hamm can’t come back in any capacity during present day UKS — his character is in prison, after all — it sounds like a there is a solid future for him in the series, including in multiple flashbacks throughout Season 2. Robert Carlock revealed exclusively to The Hollywood Reporter that Hamm will continue “to play in flashbacks.” Exciting! Carlock also added that “Jon’s been nice enough to lend his voice to some flashback stuff.”

Isn’t he just the sweetest. Those of us who know him well know that this generosity is far from a surprise.

But voiceovers and flashbacks might not be the only way that Hamm returns to the Netflix original series. Carlock hints at even more possibilities for Hamm’s character, including “a wonderful animated sequence that comes up in a later episode.” Carlock refused to comment on whether Hamm would be in the scene, but the fact that he mentions it in answering a question about whether or not Jon Hamm would be back for Season 2, I think the connection seems likely. But for those of us diehards who won’t be satisfied with an animated version of Jon Hamm, Carlock plays with all of our hearts by hinting at future seasons involving Jon Hamm: “We would like to see him again, and hopefully America would as well.”

So, OK. Carlock isn’t spilling details that will make those of us who are addicted to Jon Hamm’s hopes and dreams come true, but it’s enough to keep our love steady throughout Season 2 of The Unbreakable Kimmy Schmidt.