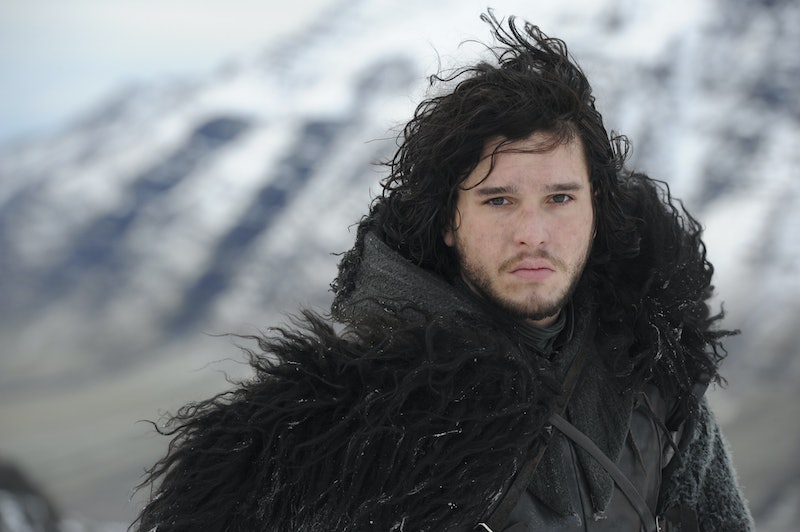 There has always been a ton of blood on HBO’s hit series Game of Thrones, but now a single splash might have a thousand meanings. HBO has just released a teaser poster for Season 6 of Game of Thrones that has the Internet going a little nuts.The poster features the face of Jon Snow (Kit Harington), turned slightly to the side, shrouded in shadow, with a bright crimson splash of blood across his face. But what is the blood on Jon Snow in the poster, and what does it say about his fate?

There’s no doubt that the creative team behind Game of Thrones puts a ton of effort into every single element, so when a poster like this is released, we’ve got to consider that every detail might be a clue. Could the blood on Jon’s face be suggesting that he is, in fact, dead, or does it mean something else? The vibrant splash of color looks a bit too fresh to be his own blood. Let’s remember that the final shot of Season 5, the left side of Jon’s face was unharmed. The betrayers of the Night’s Watch stabbed him in the gut and the back, but thankfully left his adorable visage intact, and none of his own blood had splashed up into his face. Even if his body gets dragged elsewhere postmortem, it's unlikely that any blood that bright would end up on his face.

It's clear that HBO is taking the term “teaser” to a whole new level with this poster, and the network is probably having a ton of fun watching fans go bonkers trying to figure out what it all means. After the Season 5 finale seemingly killed off the much beloved character, there has been rampant speculation as to whether or not he's actually dead. Harington, HBO, and the showrunners have continuously repeated the “Jon Snow is dead” mantra, but in the world of Game of Thrones, being dead doesn’t mean Jon Snow will stay dead. And with Harington appearing in Belfast, Ireland, where parts of Thrones are filmed, and on set, it’s looking more and more like there’s a possibility that he may live.

So whose blood is on that poster? Are we looking at a resurrected Jon Snow who may have taken revenge on one of his murderers? It’s completely possible that Snow is triumphantly standing over and looking down upon someone he’s just executed or fought to the death; their fresh, red blood having splashed him in the face. But if that’s the case, how will Jon Snow come back to life to take this revenge?

The blood might be offering up a hint there as well. Season 5 made it a point to detail the story of Lyanna Stark and Rhaegar Targaryen. Ned Stark always claimed that Jon was his bastard son, but most book readers have thought for a while now that Jon is actually a result of the affair between Rhaegar and Lyanna. Though history says that Rhaegar kidnapped Lyanna, leading to Robert’s invasion, what if the two were in love and ran off together? What if Lyanna had a child? In the novel A Game of Thrones, Ned recalls finding his sister in a tower, lying in a bed soaked with blood. "Promise me, Ned," she said before dying. If Jon Snow is the son of Lyanna and Rhaeger, a Stark and a Targaryen, that would make him a very literal personification of "A Song of Ice and Fire.”

The blood across Jon’s face in the poster then may be hinting at his actual blood lines, which are very much entwined with his destiny. Will Melisandre raise him from the dead, like other red priests have done? If the Night’s Watch try to burn his body to prevent its reanimation into a wight, will the fire resurrect him? Daenerys wasn’t dead when she walked into the fire at the end of Season 1, but she was in a sense, reborn. Last season Maester Aemon gave Jon a bit of advice: "Kill the boy, Jon Snow," he said. "And let the man be born." Jon Snow officially dying would release him from his vows to the Night’s Watch, allowing for a new destiny. Rise up and take what is yours, Jon Snow, with fire and blood.