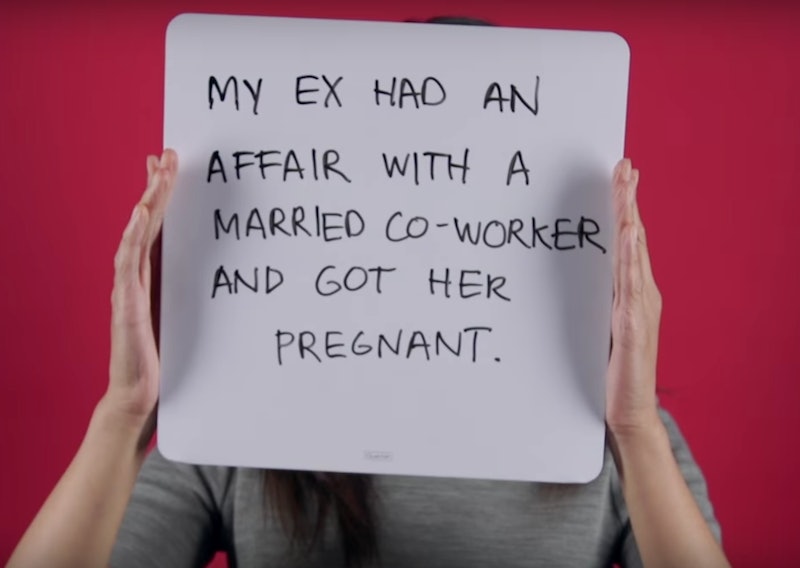 Relationships differ for every couple, but there is one thing that many people seem to agree on when it comes to murky matters of the heart — that cheating is wrong. But if that's the case, why do people cheat in the first place? We know that infidelity in any type of relationship can be an emotionally and mentally draining experience for both the person being cheated on, and the person doing the cheating, and yet chances are you or someone you know has felt the emotional impact of cheating at least once at some point. If people hate cheating so much, why do we put ourselves and the people we love through it?

That's the question evolutionary biologist Dr. David Barash and biological anthropologist Dr. Helen Fisher address in the latest episode of Love, Factually , Bustle's weekly video series exploring the science that drives our search for sex, love, and relationships. It's true that 91 percent of Americans think that cheating on a partner is morally wrong, and yet studies reveal that 30 percent of married Americans have admitted to cheating on their partners during the course of their relationship. You don't have to be a math genius to see that those numbers don't exactly add up, but before you dismiss cheaters as people who simply lack a strong moral code, Barash and Fisher think it's important to consider another very important factor that might cause some people to be unfaithful: science.

Check out the second episode of Love, Factually, below as they explain why, according to science, some people may be genetically prone to cheat on their partners:

As Dr. Fisher points out, cheating can affect everybody — studies show that of adults under 40, women are just as likely to cheat as men. So what puts us at risk for acting unfaithfully to our partners? These three theories might lend some insight:

According to Dr. Barash, one of the biggest theories that could explain why humans cheat on their partners is also one of the simplest — monogamy just doesn't come naturally to us. "If a Martian zoologist were to come to Earth, he or she would conclude without a doubt that human beings are not monogamous," he explains. Of course, that's not necessarily a bad thing. There are loads of skills and practices that don't come naturally to many of us. Being able to fluently read music, for instance, or know how to cook, also aren't abilities we are immediately born with, but if it's something that matters to us, we'll take the time to develop them. The same, Barash says, applies to monogamy. We may not naturally be inclined to commit ourselves to one person, but it's still something we can prioritize if we choose.

Your genetics determine everything from your height to your eye color to how good you are at sports to how easily you get stressed out — and if this second theory is to be believed, how likely you are to cheat. First, let's look at DRD4, a gene that helps to produce the hormone dopamine, which as you probably know, is what the brain produces when it's being stimulated by pleasure — food, sex, you name it. As Love, Factually host Anna Parsons points out, everyone has the DRD4 gene, but it varies in size from person to person. "People with long DRD4 alleles need more stimulation to release dopamine," she explains. Why is this significant? Because studies show that people with long alleles are twice as likely as people with short alleles to "have a history of uncommitted sex, including one night stands, and acts of infidelity," Parsons explains.

But your genes aren't done potentially wrecking havoc on your love life just yet. Another gene, the AVPR1A gene, is involved with the production of arginine vasopressin, which Parsons explains, "is responsible for trust, empathy, and sexual bonding." According to one study conducted with sets of twins, 40 percent of women who had specific variants of this gene were more likely to cheat. So, while we shouldn't turn to genetics to completely justify cheating, it can perhaps explain why a person toyed with the idea in the first place.

According to Fisher, we have three different brain systems in place that oversee mating: sex drive, feelings of romantic love, and feelings of deep attachment. But, that doesn't mean they're always willing to work cooperatively with each other. "The problem comes when these three brain systems are not always directed at the same human being," Fisher says. So, while you may feel deeply attached to someone, the part of your brain in charge of your sex drive might be focused on someone else, while the part in control of romantic love is obsessing over a different person altogether. It's kind of like your brain has three separate minds of its own — and they all have completely different agendas.

Are we all hardwired to be cheaters?

No, not necessarily — but as Parsons points out, these theories do suggest that when someone cheats, there are more factors at play than we immediately realize, and they don't necessarily have anything to do with having a shady moral compass. So, before you write someone off as being a completely terrible person for being unfaithful, keep in mind the variety of biological influences that shape us all. Cheating can definitely be a painful experience for every player involved — but it doesn't have to mean the end of a relationship.

Want to know more about why love makes us feel good, bad, and everything in between? Then keep watching new episodes of 'Love, Factually' every Wednesday on Bustle's Facebook page!