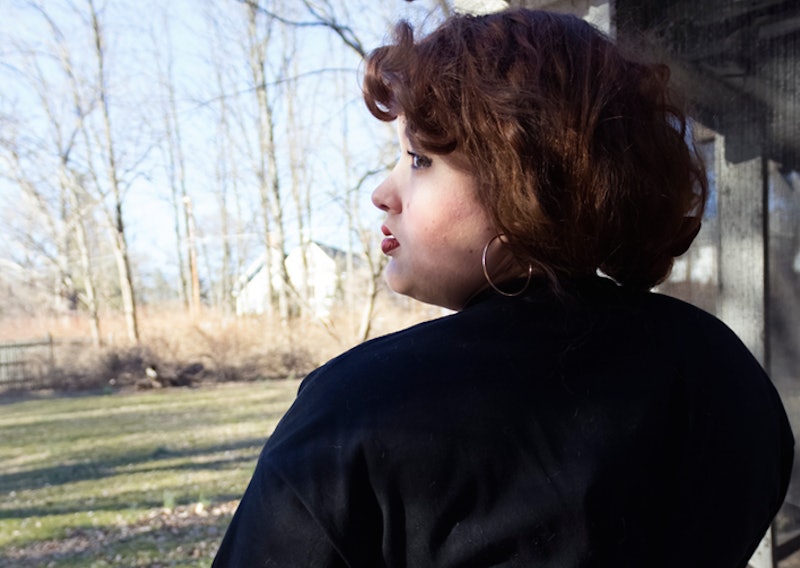 I couldn't tell you when the first time I was called fat was. It might have been in elementary school, when, after gaining a few pounds in the summer, a boy I liked told me I was too fat to be friends with. Maybe it was that time I got my hair cut in Colombia, when a male stylist touched my belly and told me I needed to lose my gorditos so my body could match my face. It could've even been a relative — someone concerned that the "excess" weight would correlate to a shameful, solitary, un-wed existence. Regardless, for a long time, that's all fat was to me: a burden. A thing I had to actively work towards fixing. A thing preventing me from being my best, truest self.

The funny thing is, I wasn't all that fat until about two years ago. I was just fatter than I should've been, per both Colombian and American ideals of acceptability. I was fatter than my peers and a lot of my family. But statistically, I was pretty "average." The word fat felt like an enemy, though — and the thought of myself actually being fat an even worse nemesis.

That wouldn't change for a while. Not until I was in college, out of the country and surrounded by different people. It wouldn't change until stumbling upon an old copy of Marilyn Wann's Fat!So? and Gabi Gregg's style blog. It wouldn't change until learning all the things fat is not. Including, but not limited to, an epidemic, an automatic death sentence, something unattractive, undesirable, or unemployable. Something bad. Since then, I've used the word "fat" constantly.

This isn't to say that I go around the streets of New York greeting any plus size human I come across (something of a rarity in Manhattan anyway) with, "Greetings, fatty, how goes it?" I don't assign the label to folks whose relationship with their bodies is unclear to me. Rather, I use it to describe myself. I use it to describe fellow fat women and activists who have reclaimed the term as a descriptor and nothing more. I use it to describe what it actually is: "A natural oily or greasy substance occurring in animal bodies."

More importantly, perhaps, I use it positively. "My fat rolls are looking fly as hell today." "My back boobies look radiantly fat in this bikini." "There's this fat activist I would love for you to check out." "I am fat, and I like being fat." "Isn't this fat model brilliant?"

I understand why a lot of folks can't, or don't want to, do the same. It's certainly not easy to re-train your brain after years upon years of negative associations with the F-word. "Fat" has been used to insult, to laugh at, to mock, to belittle, and to misrepresent larger bodies for likely as long as most of us can remember. Even those closest to us might fat shame — often unaware of the implications of saying things like, "You're not fat, you're beautiful," or, "Chris Christie is such a fat slob."

To me, however, it's no longer a negative. On the most basic of levels, it's just a descriptor. I am not "curvy." I'm not "fuller-figured." Nor am I "husky" or "chubby" or "robust." I am fat. Every part of my body (sans elbows, perhaps) is covered in wobbly bits, making "fat" a hell of a lot more accurate than those other adjectives. And this fact does not make me any less worthy of respect or tolerance or proper health care or equal pay or fashion or sexuality. If anyone chooses to believe otherwise, it is not up to me to cater to them. It's not up to me, or any other fat person, to shrink, starve, or change to appease bigotry. We just don't owe anyone acquiescence in exchange for hatred.

It amazes me how often prejudices against fat people go undiscussed — given a pass because fat shamers have the majority of contemporary media to back them on their views. If doctors, FLOTUS, and schools at large perpetuate the notion that fatness is inherently bad, and fat people inherently flawed, then who's to tell any given hater that they are wrong?

Well, few people will likely bother telling them they are wrong. It's easier to go with the grain sometimes: to vilify fatness, and subsequently, fat people because that's the thing to do. Unfortunately, mainstream media is still pretty void of radical fat voices. With the exception of Gabourey Sidibe, it's still largely void of visibly, unapologetically fat women as well.

It can feel bullshitty and invalidating to never see yourself or your body type represented positively. But if media and social constructs won't give us representation, visibility, or acceptance, it's often down to us to create those things for ourselves. For me, part of doing that has been first coming to terms with the word fat, then working actively towards embracing the word fat.

From my experiences, there are more folks than ever these days who feel more or less resigned to their fatness. They don't particularly like their fat, nor do they dislike it in any way. They just accept it as their reality. They have figured out that they should never be mistreated for the way their body looks. They might even dedicate their time to fighting the fight against size discrimination, using the word fat in the neutral connotation it arguably deserves to be allowed to signify. All of those things are amazing, progressive, and necessary.

I'm hoping that someday, however, "fat" can be more than that. Not just something we grow up passively (although that is a brilliant step, and one that in and of itself is difficult to achieve). I hope that we can learn to actively love our fatness in the way a thinner counterpart might celebrate their flat tummy. I hope that instead of saying, "This dress makes me look fat..." with a tone of slight disappointment, we can welcome such an occurrence with, "This dress makes me look fat!" in a tone of self-celebration.

Of course, everyone is entitled to want to look a certain way: To change their body in the way they see fit. Although it can sometimes be difficult to determine whether we want to change because of our own desires and preferences versus the desires and preferences of the culture we live in, I truly believe that "you do you" is a mantra all folks should have a right to exercise, including as it applies to the way they choose to present themselves and their bodies.

As for me, however, I use the word "fat" positively because that's how I perceive it. And I believe that in order to take "fat" to a level past acceptance and straight to celebration, we need to continue to deconstruct it. We need to utilize it without shame, or stigma, or insult, or injury. We need to use it as a neutral word (sans moral connotations), then a celebratory word, then as we would any other word. It should be allowed to be the same as any other word. But I don't know that it can be until we reclaim it even more fully.

When I call myself fat, or any other person for that matter, it's often met with confusion — with the seemingly instinctual comeback of, "No, that isn't true. Why would you say that?" I always try to follow that up with the acknowledgment that I am not criticizing myself. I am not being self-deprecating, or critiquing the body of another. I'm just using a descriptive word — something, to me, no different than "slim" or "red-headed" or "athletic."

If you begin utilizing fat in positive connotations alone, and are met with similarly perplexed reactions, my advice is to take the opportunity to discuss these issues openly. If possible, tell the person you are with that you do not believe that fatness is a sin; that you want to live in a world where kids are not made to feel like an infectious disease for their bodies; that you see beauty in larger forms; that there should be no difference between uttering the words "thin" and "fat"; that no body type deserves to be targeted as a result of plain and simple prejudice.

And then, try to keep using it. When you're immersed in discussions of body and fat politics online, it's not uncommon to focus on those conversations, to feel optimistic at the work being done to combat size discrimination. In the real world, the same isn't usually true, unless you live in an incredibly progressive area. So by using the word "fat" in real life — openly, positively, and with affection — you can actually have these conversations outside of cyberspace. Usually with people who are most unfamiliar with radical concepts of body acceptance. Usually people who might need to hear this stuff the most.

Want more body positivity? Check out the podcast below, and be sure to subscribe to The BodCast for more radical self-love inspo!