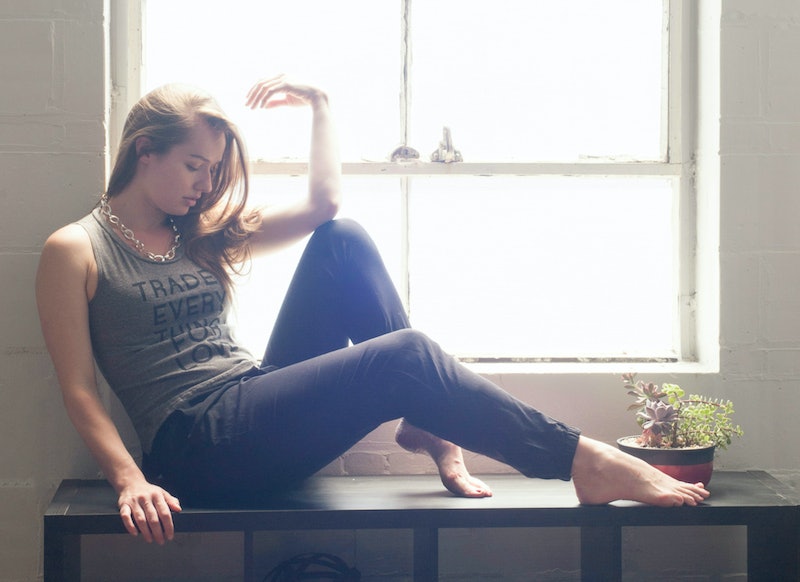 I first went to Al-Anon when I was 3 years old. Well, that’s not entirely true. I was never in the actual room where they had their meetings; I went to the childcare room at the Unitarian Universalist church that held the Al-Anon meetings that my mom attended for a while.

I have very few memories of the place, and most of them are broad and vague. Mostly that the room was in the basement and that I felt incredibly possessive of my baby brother. In fact, my memories are so few and so vague that I was amazed that I was even able to recognize the church when I was older.

On the other hand, I have very distinct and vivid memories of the events that led my mom to attend Al-Anon meetings. Memories that are so sharp that I can still feel the rattle in my bones from when my father’s gun went off just feet above my head. So precise that I can still count the number of cop cars that were outside my house (two) and that I can recall that the first officer to speak to my father was blonde. So clear that I can still hear the officer who lead my father out in handcuffs telling me that everything was going to be all right.

Sharp, vivid memories that serve as my first real memories, ever.

I don’t know when my mother's attendance at the meetings ended; just that it did. But the echoes of the support group for those affected by alcoholics echoed in little things, like when my mother would offhandedly note that alcoholism is a disease. I gleaned that AA meetings for my father were mandatory, whereas my mom’s Al-Anon meetings were more of a recommendation. My dad went to the minimum required by the courts, and my mom went for a little while longer.

And then she didn’t.

And that’s all I really knew.

The next time I set foot in a meeting, I was 29 — and without the alcoholic in my life. My father had passed away a few months prior; a death I had no doubt was expedited due to decades of heavy drinking, some of which occurred even as his health rapidly declined, throughout treatments and against all medical recommendations.

My next meeting would come after weeks of attempting in vain to get my mom to return to Al-Anon, trying to gently coax her to use it as a way to help process her grief. I went in circles with my mom, exhausting myself, listening to her pine over meetings from yesteryear but refusing to acknowledge that Al-Anon was not a relic from the past. I started attending after realizing I couldn’t save my mom from her own suffering — that the only person I could save was myself.

My next meeting came after fruitless appointments with my therapist, where I was exhausting myself, feeling like I was missing a key ingredient. I started meetings after doing a few Google searches on the behavior of adult children of alcoholics, and gaining more insight there than through a year’s worth of therapy.

I went because I needed clarity on myself, for myself. I went because I was mourning way more than the death of the man who raised me. I went because my own life had been unraveling, long before my father passed away, and so much of it could be traced back to growing up in an unstable, alcoholic household. I went because I found myself simultaneously at a crossroads and stuck in the mud. I found a slew of meetings scattered throughout the area, picked a few that were within reasonable driving distance, and forced myself to attend.

I had expected that I would start crying at some point during the first meeting. What I didn’t expect was to walk into the room and feel it downright vibrate with frantic energy. Or perhaps I was so frantic that I couldn't help but project out. Either way, the atmosphere of the room was so intense that I wanted to start crying within seconds of entering the meeting. I was leaking tears within minutes of the standard Al-Anon preamble; by the time it was my turn to read a section from the book or share an experience, I was a mess of big, pendulous tears and balled-up tissues from a box that had been graciously pushed in my direction. Although it’s voluntary to read or share, I refused to pass on either. Eventually I found my rhythm with what I was reading, stubborn about finishing the paragraph in front of me.

“The alcoholic in my life is my father,” I decided to share after reading, my breathing finally a little more steady. “Was. He passed…” and with that, I burst into another set of tears.

For the first two weeks after I started meetings, Pink’s “Sober” kept coming on the radio. On multiple stations — and at an absurd frequency — Pink would belt out her heartbreaking song about addiction. And I would change the station within four or five beats of realizing what song I was listening to.

“I’m not the one who needs to figure out how to feel good sober!” I would tell my radio, like a madwoman in her car. “I am sober! You’re barking up the wrong tree!” And with that, I would self-righteously switch to an upbeat pop song and crank up the volume.

But the radio was relentless. After the 10th or 11th time the song came on, I finally forced myself to listen to it in full. Before I could even get to the chorus, I started crying so violently that I had to pull over.

Al-Anon follows the 12 Steps from Alcoholics Anonymous almost verbatim — complete with the first step: Admit you are powerless over alcohol, that your life had become unmanageable.

If there were ever a step that got under my skin, it was the first step.

“Admit we’re powerless over alcohol.” My conscious memory was kickstarted with a gunshot and police lights; you don’t think I learned at an incredibly young age how powerless I was? That concept was as ingrained into my psyche as the blonde officer asking my father if they could speak inside, as ingrained as the middle-aged officer telling me everything was going to be all right. As ingrained as the unspoken rules and understandings in the house, the chaos and uncertainty, the screaming and yelling, the fact that everything — from dinner times to budgets — revolved around this insurmountable force.

Oh, I understood powerless. Don’t you be telling me to recognize being powerless over alcohol. I don’t need to go to meeting to be told that.

But it took hearing others’ stories, week after week, meeting after meeting, to realize that I had been going about the first step all wrong. I’d been using the wrong meanings and emphasizing the incorrect words.

And through not recognizing that, my life certainly had become unmanageable.

As I navigated through the rest of the steps, there was a part of me that worried the meetings were too little, too late. I couldn’t help but imagine where I’d be if I had started these sooner — if it had only been 10 years between the day care room and main room, and not 25. The lessons I could’ve learned. The pitfalls I could’ve avoided.

But as I continued that navigation, I began to recognize that reaching out can only be effective when we’re ready for it. And I was only ready for it after being placed in such a dire situation, with a death of an addicted parent in one hand and a lifetime of faulty decisions in the other, before I’d finally force myself to attend meetings. In some ways, I needed to hit my own version of rock bottom before I could admit that I needed help.

A few months into the new year, I called up my mom. It was one of my check-in calls, the ones where I essentially phone in so my mom has someone to ramble to in heartbreakingly beautiful non-sequiturs. I was ashamed to admit that, as I got into the rhythm of the meetings, I fell out of the rhythm of calling her up.

“So, what’s new with you?” she asked. It had been about half a year since my father had passed, and little things like that gave me hope. Asking someone else how they were doing. At the height of my father’s decline, phone calls with her were a hurricane of random thoughts until the call ended.

“Oh, I remember Al-Anon,” she responded. “I used to go twice a week as well. For about two years, I did. And I remember feeling so devastated when I couldn’t go. If I missed a meeting, I could feel it. Just the support I got…”

“Mom, why did you stop going?”

“Oh, I just outgrew it!” she replied. “People would start talking about their personal problems and I just wasn’t there for that. But, oh, the support those meetings used to give me…”

“You know, you could always try it out one more time.” I decided to give things one last nudge. “There are a lot of people who go to meetings who had spouses pass away. It might help with everything.”

“Oh, I could, I could,” she replied. “I mean, I just outgrew the program, but if it’s working for you, then that’s great. I mean, you might outgrow it too, but if it works for now…”

Eventually, attending meetings didn’t guarantee crying. Sometimes there was laughter. Sometimes someone would say or read something that wouldn’t resonate and I would start to tune out. Sometimes someone would say or read something, and I would smile and nod so hard because, damn it, that was how I felt. Sometimes a topic would be brought up and the chorus of “Me, too!” that would follow would bring about a feeling that can only be attained when you’re surrounded by people who get it.

Sometimes a newcomer would arrive and I would recognize those same wild eyes, the trembling lower lip, the desperate desire to simultaneously become invisible while also unloading your woes. And sometimes I would stumble across a sentence, a person’s experience, a rogue emotion, and I would have fists filled with balled-up tissues again, letting me know that I still had a long, long way to go.

But we all have a long way to go, whether we deal with addiction or not, whether support groups would resonate with us or not. We never get to use the past tense, because it’s never fully over. We’re always recovering from what wounds us. We’re all battling and striving and hoping for the best. Present continuous tense, from now until the rest of our lives.

But one day at a time, as they say.

I was 3 years old when my father shot his gun out the window as a way to win an argument. I was 29 years old when I realized just how long my bones had been rattling — and what I needed to do to help calm them down.