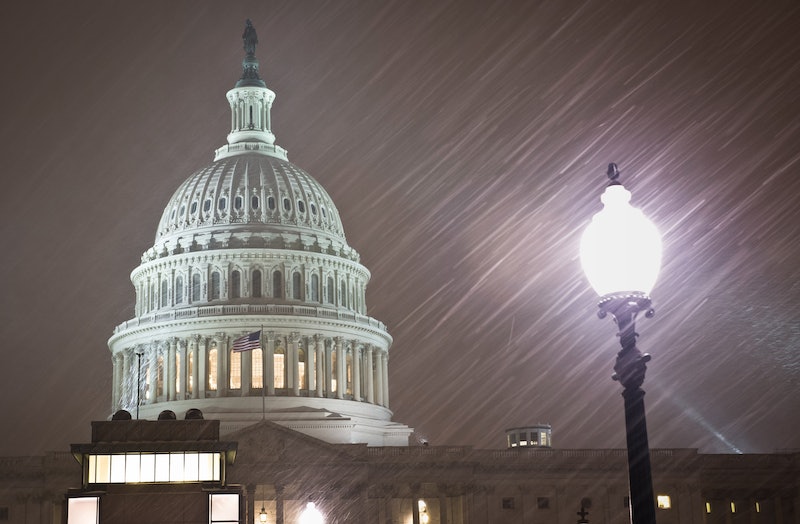 On Thursday, the U.S. House of Representatives Judiciary Committee will hold a hearing to consider the Prenatal Nondiscrimination Act of 2016, also known as PRENDA. The legislation claims to help communities of color and even women by putting bans on sex-selective and race-based abortions. However, as NARAL Pro-Choice America President Ilyse Hogue stated in her Congressional testimony to be given on Thursday (which Bustle was given an advance copy of) PRENDA could mean that abortion providers may face "five years in prison for failing to determine if race or sex is a factor in a woman's decision to terminate a pregnancy." Hogue added that, "ultimately, the legislation could erect new barriers to reproductive health care for women and perpetuates stereotypes about immigrant communities and communities of color."

The Prenatal Nondiscrimination Act isn't new. The legislation has been proposed multiple times. Perhaps most famously, in 2012, the House of Representatives rejected PRENDA legislation. Although it's not getting much attention, PRENDA legislation is once again a concern

Opponents to the legislation — which, in addition to NARAL Pro-Choice America, include the National Asian Pacific Women's Forum (NAPAWF), Trust Black Women Partnership, and In Our Own Voice: National Black Women's Reproductive Justice Agenda — say that, among other things, PRENDA would dramatically increase racial profiling among women of color, most notably black, Asian American, and Pacific Islander women. Activists have called the bill a wolf in sheep's clothing, one that purports to care about women's health and reproductive rights while actually restricting them in a racially motivated way.

"It's a sneaky little bugger," Miriam Yeung, Executive Director of the National Asian Pacific Women's Forum, tells Bustle. "This bill would ban abortions off the backs of women of color and immigrants, and it tries to tell us it's for our own good. The proponents cite 'women's rights' and all of our social justice language and claim it's to help eliminate discrimination."

Bustle reached out to the office of Rep. Trent Franks (R-AZ) who introduced the legislation, but was unable to receive comment by the time of publication.

In 2012, when PRENDA legislation passed through the House Judiciary Committee (but, ultimately, failed to be passed in the House of Representatives), he released a statement that:

As Americans, all of us know in our hearts that aborting a little baby because he or she happens to be the "wrong color" or because or she is a little girl instead of a little boy is fundamentally wrong, and represents a betrayal of the precious truth that all human beings are created equal, with the Imago Dei stamped on their souls.

I know when the subject is related in any way to abortion, the doors of reason and human compassion in our minds and hearts often close, and the humanity of the unborn and the inhumanity of what is being done to them can sometimes no longer be seen. But this is the civil rights battle that will define our generation. At the very least, we should be able to agree that allowing the lives of unborn children to be torn from them simply because they happen to be the "wrong color" or the "wrong sex" is not who we are as Americans.

Yeung is one of the people who will testify before the Constitution and Civil Justice subcommittee of the Judiciary Committee on Thursday regarding PRENDA.Since it's widely believed among those fighting PRENDA that the legislation specifically targets black and Asian American women, I ask Yeung if the "sex-based abortion" aspect is tied to a mistaken belief that Asian American women abort female fetuses in a similar manner as, say, Chinese women. Yeung does not equivocate.

"Yes," she said flatly, before giving an exasperated laugh. She then explains:

The bill proponents cite examples that are happening in India and China and, with xenophobic logic, assume Asian American women are importing those same barbaric practices here in the United States.

Yeung notes that many Asian American feminists have at times been concerned about the phenomenon of sex-selective abortion in Asian culture, only to look at the numbers and find that Asian American women, on average, are actually having more girls than white Americans, according to a University of Chicago study. Plus, while sex-selective abortion is not the widespread problem for Asian American women as it is for Asian women in other nations, the United Nations and the World Health Organization have been adamant that banning abortion is disastrous for women, and not the way to solve that problem anyway.

And what about "race-based" abortions? If we allow for a little oversimplification in the case of mixed-race fetuses, we can generally say that a black woman knows she is going to have a black baby. That means a black woman seeking abortion for any number of personal reasons can be ludicrously accused of choosing an abortion for race-based reasons.

"Therein lies the hypocrisy and the nonsensicalness," Yeung tells Bustle:

The racial profiling, the burden of this being put on the women. When black women are targeted with this bill, it's connected to a larger racist campaign that says black women choosing abortion is endangering their [race], that it's black genocide, they claim places like Planned Parenthood are causing black genocide.

Hogue's testimony will also likely address the legislation's problems with race. Testifying against a previous incarnation of the bill, in 2011, NARAL's former president Nancy Keenan stated that the proposed legislation:

...subjects providers to fines and prison time for failing to detect that a woman is seeking abortion services for reasons of race or sex selection, the legislation essentially would encourage racial profiling in the doctor's office.

"We oppose this bill," Yeung says, "because it is a hypocritical attempt to restrict women's rights while claiming to fight sexism and racism. You cannot give women rights by taking them away, and that it fundamentally the flawed logic behind this bill. It's a bad policy solution in search of a non-existent problem."

You'll be able to watch the livestream of her testimony here at 3pm ET on Thursday.

More like this
Watch Jacinda Arden’s Devastatingly Honest Resignation Speech
By Sam Ramsden
24 History-Making Black Women You Probably Didn't Learn About In School
By Ayana Lage and JR Thorpe
25 Inspiring Quotes From Black Women To Celebrate Black History Month
By Kyli Rodriguez-Cayro and JR Thorpe
18 Hinge Prompt Answers To Try If You’re Looking For Something Casual
By Lexi Inks
Get Even More From Bustle — Sign Up For The Newsletter
From hair trends to relationship advice, our daily newsletter has everything you need to sound like a person who’s on TikTok, even if you aren’t.