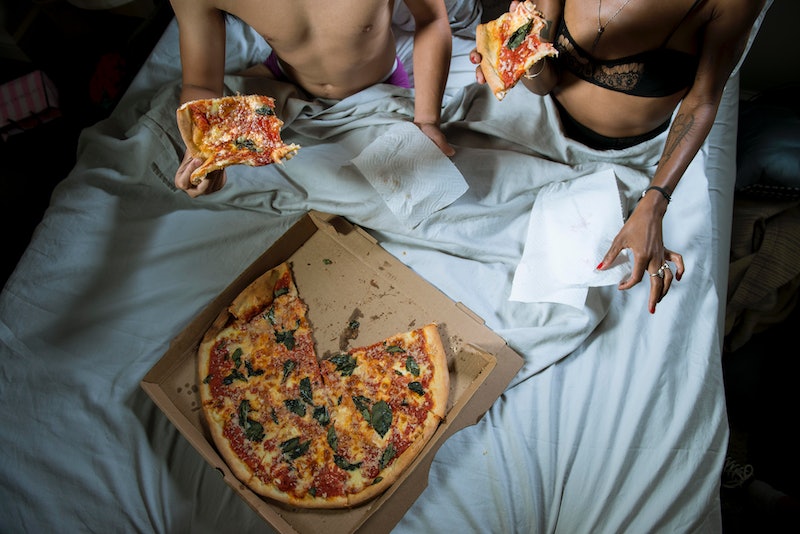 If given the chance to the have best meal of your life or the best sex of your life, what would you choose? It’s a difficult choice, isn’t it? Well, according to recent data released by MiumMium, a marketplace for on-demand chefs, almost a third of people would choose the best meal of their lives over sex. Shocked? Well, you shouldn’t be. Food gives us life! Sex gives us… well, if we’re lucky, an orgasm. It certainly doesn’t tickle the tongue (or belly) quite like a triple whipped Brie or a slice of New York’s finest. And I'm talking about pizza here, not the NYPD.

This isn’t the first time that a study has revealed that, for many, food trumps sex. A 2013 study of over 200 male and female Columbia University students found that 42 percent of them would give up oral sex before giving up cheese, with the majority of those people being women. But, hey, not all women are that into oral sex, so obviously cheese would win that contest.

So if you've found yourself presented with the choice of having sex or good food, and have opted for food, know that you are definitely not alone. Here are more facts that food is far more beloved than sex — at least by some of us.

1. Three Out Of 10 Adults Want The Best Meal Of Their Life Instead Of Sex

Although personally, depending on who my sexual partner is, I’d take a box of mac and cheese over sex, MiumMium found that 28.6 percent of adults want the best meal of their life over sex. I mean, yeah, sex is awesome, but if you’ve yet to have the best meal of your life, that’s definitely a more intriguing prospect.

2. Just Over A Third Of Adults Want The Best Sex Over The Best Meal

While there’s the 28.6 percent who are leaning toward the food, the same study found that only 35.4 percent of adults would go for the best sex over the best meal. Who are these people?! What are they thinking? Wait. Maybe they’re not thinking.

3. Men And Women Have Similar Thinking On The Food Versus Sex Thing

4. Chocolate And Steak Weigh High On The Food Preference Scale

5. Women Are More Likely To Pass Up Sex For A Year For Food

According to the same study by Match and Today, 39 percent of women would willingly and gladly, give up sex for a year instead of giving up their favorite food for a year. In contrast, only 16 percent of men would do such a thing. (Dear men: Get your priorities straight, please.)

A study by Cadbury found that a whopping 70 percent of Irish women would take hot chocolate over sex any day. Hey, hot chocolate is delicious, who can blame them?

7. Over Half Of Americans Want Their Coffee Instead Of Morning Sex

Despite the fact that morning sex is amazing, a 2013 poll found that 53 percent of people want coffee instead of sex first thing in the morning. The same poll also found that people can give up sex far longer than they can ever imagine giving up coffee.

8. The Majority Of French Women Prefer Food To Sex

A 2014 study by Harris Interactive that was published in the French edition of Grazia, found that 74 percent of French women would rather have gourmet meals than sex… which, if you’ve been to France, can come as no surprise at all. The top food for which French women can’t get enough are chocolate, at 49 percent, cheese, at 39 percent, and rounding out the top three at 36 percent, is fois gras. The same survey also found that 25 percent of French women actually derive more pleasure out of food than sex… and yet the French are supposed to be such phenomenal lovers! I guess their cheese is better. (Pro tip: It is.)

A 2011 survey by Maple Leaf Food Inc found that 43 percent of Canadians, both male and female, prefer bacon to sex. However, to prove that these bacon lovers aren't only obsessed with bacon, 81 percent of the respondents who put bacon above sex did say that they consider themselves romantic and 82 percent of them reported they were “good lovers.” I guess bacon provides the confidence we all need in the sack — we just never knew it was bacon that would give it to us.

More like this
The Best Time To Date After A Breakup, According To Experts
By Bustle Editors
7 Women Share Their Best Orgasm Stories
By Lexi Inks
Expert Tips For Being On Top When You're Plus-Size
By Lexi Inks
What Is The Forest Personality Test? The TikTok Trend, Explained
By Georgina Lawton
Get Even More From Bustle — Sign Up For The Newsletter