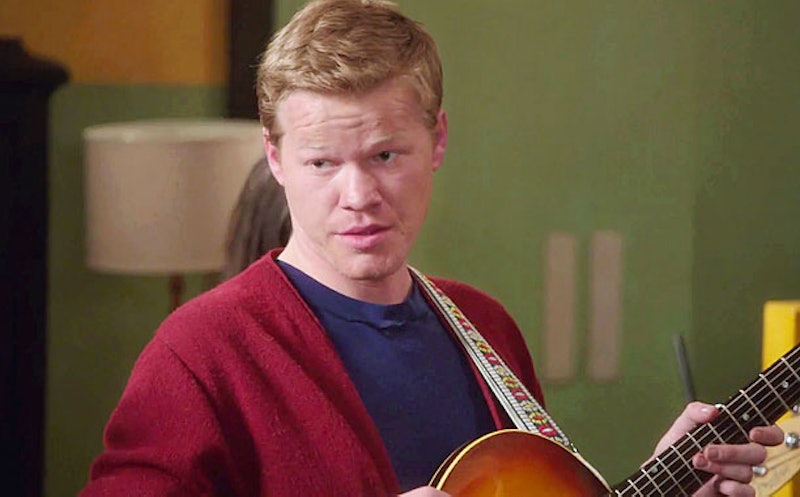 Just when we thought Jason Katims could not make us any happier, the Friday Nights Lights and Parenthood crossover only gets better. Entertainment Weekly released an exclusive preview of the first installment of Friday Night at the Luncheonette , and it surpasses even our wildest hopes in just two and a half minutes.

We already knew that the four-part webseries would follow Amber as she works after hours at the Luncheonette recording studio while watching Max and that at some point, she hangs out with Crucifictorious and Billy Riggins. The short sneak peek below doesn't show Billy yet, but Crucifictorious is there, along with several amazing Friday Night Lights callbacks bound to make any fan scream with excitement.

Already in the video's very first moment, Amber is wearing an East Dillon Lions shirt. How she got it doesn't quite make sense yet but hopefully, it'll be explained. After Amber and Max talk about cockroaches, someone knocks on the door and it is none other than Landry Clarke. Amber's response, "Hi, um, you're Becky's friend? Lance?"

Somehow, Becky and Amber know each other and Becky set up this whole thing. Maybe we were right and she goes to Berkeley with Drew, or it's because they basically dated the same guy. But none of that even matters, because Amber called Landry "Lance" and it was almost too much to handle.

Jesse Plemons has easily slipped back into playing Landry, Devin is back to record with the band, and Amber and Landry are accidentally wearing matching cardigans. It may be shorter than we wanted (though would any episode really be long enough?), but Part 1 has already proved that Friday Night at the Luncheonette is going to be amazing.

Watch the video below and be sure to look out for parts 2-4, and of course, Billy Riggins.

More like this
'Survivor' Is Finally Coming Back To UK Screens
By El Hunt
The Bling Ring's Alexis Neiers Has Come A Long Way Since Her 'Pretty Wild' Days
By Sophie McEvoy and Arya Roshanian
15 Piping Hot Behind-The-Scenes Secrets From 'Great British Bake Off'
By Emily Dixon and Darshita Goyal
What’s New On Netflix: Ana De Armas’ 'Blonde' & A Nick Kroll Special
By Arya Roshanian
Get Even More From Bustle — Sign Up For The Newsletter