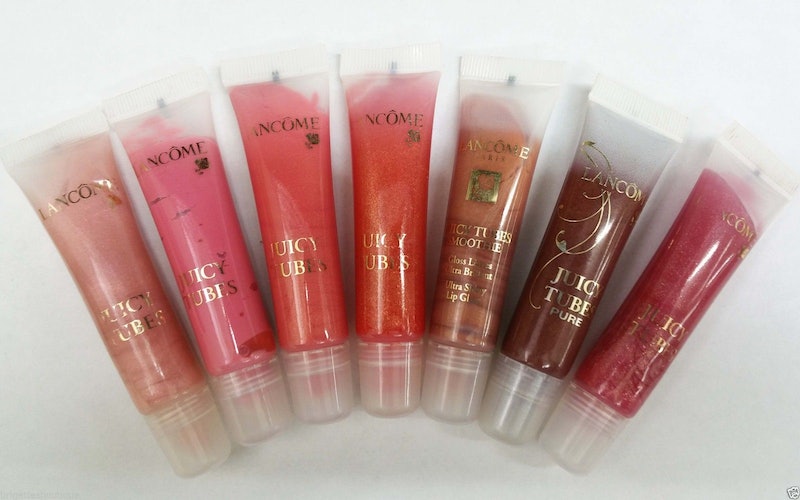 There were certain things about high school that, when remembered now, can take a person way back: A pair of Birkenstocks, the smell of Gap perfume, metallic woven belts, and, most of all, Lancôme Juicy Tubes. If the latter was essential to you, then I'm sure you're familiar with the set of experiences only fans of Juicy Tubes will understand — considering the clique that formed around them was exclusive and elite. While the majority of '90s and early '00s girls were wearing regular ol' lip balm or — scoff — drugstore brand lip glosses, Juicy owners were rolling in department store swag.

We didn't get our beauty products from underneath the buzz of fluorescent lights, or the aisle next to the deodorants and tampons; no no. We saved our allowances and purchased the tubes from over a counter. However, being a member of the Juicy Club came with its own set of trials and tribulations.

Sure, the gloss was like a power symbol as we walked down the halls gliding it on, but it also made sandwich crumbs stick permanently to our lips, was like a magnet for our hair, and kept our wallet relatively empty all month long.

But it was worth it — so, so worth it. Below are 11 things only Juicy Tube lovers can understand. Get ready for a trip down memory lane.

1. They Were A First Foray Into The World Of Makeup

For some of us back in the day, mascara wands still resulted in poked eyes, eyeliners sensed fear and would run wild on our face, lipstick made us feel like grandmother on Sunday morning, and eyeshadow made us look like we got hit in the eye during gym class.

Juicy Tubes were one of the first makeup options we were able to crack, and wear without fear of looking ridiculous. They were like the training bra of the makeup drawer, if you will.

2. And One Of The Things We Could Get Away With Wearing

If your 'rents were strict or your school had super unfair dress codes that kept makeup to a minimum, these life-giving Juicy Tubes were likely one of the few things you could get away with wearing when stepping out of the house. Here's to defiance!

3. They Were So Superior To Anything Else

Dr. Pepper Lip Smackers were for children. You were a woman now and you needed proper, grown-up cosmetics. Seeing as you had to go up to the Lancôme counter to get one of those bad boys, it totally made you feel like you could put on a pair of shoulder pads and waltz right into the adult world.

Secretly, you kept your Lip Smackers too, of course.

All the cool girls in school would gloss on the stuff in between periods and inside bathrooms, making you feel like part of the clique when you did it, too. Well, you know, not really. Because they were mean and still didn't know your name. But you were, like, halfway in.

5. They Cost Us All Of Our Allowance Money

We had to work a lot of hours at that Dairy Queen to buy ourselves one of those tubes. Slapping a five dollar bill on the counter wasn't enough, so purchasing one of those lippies taught us our first lesson in "beauty is pain:" We were going to have to spend a lot of allowance if we wanted to build our makeup drawer arsenal.

6. Partly Because Having One Was Never Enough

They came in a series of colors — how could we be expected to only own one? There were pink, red, magenta, and lilac purples. There was no way we were going to pass up on those shades.

7. But They Glided On Sheer

Piggy-backing off of that last point, they all glided on maddeningly sheer. How could it make that pretty color inside the tube, but not on our lips? Just one of those laws of science we'll never be able to crack, I guess.

8. And They Were Like A Honey Trap For Hair

It made no sense. Without lip gloss, our hair stayed put all day and didn't touch our faces. But the second we put some Juicy on, there would be a giant gust of wind indoors and we'd spend the next hour wiping thick gloss off the ends of our manes.

9. They Were Impossible To Mack With

The glosses gave us a perfectly kissable pout... but once it was time to make-out, they had to be wiped off with a napkin immediately. If you ever tried to mack with one on, you'll know why: They turned into industrial-strength varnish and the person we were kissing might have to spend the next hour trying to wipe it off from their face. Not exactly what you'd call a mood setter.

10. We Never Actually Finished A Tube

Because just like pens or hair ties, those suckers were crazy easy to lose. And then they reappeared about two years later, found in the bottom of a purse or wedged into the back pocket of a forgotten pair of jeans.

11. But It Didn't Matter, Because They Gave Us All The Confidence

Even if it was just a high shine gloss, the Juicy Tube made us feel like an invisible fan was following us, sometimes making us walk slow mo as we shook our hair out wherever we went.

Juicy Tubes made us feel confident, and that's all that really mattered.

More like this
The 'Kenan & Kel' Reunion On 'SNL' Took A Dramatic Turn, Thanks To Keke Palmer
By Brad Witter
The First Trailer For 'That '90s Show' Includes So Many Nods To The Original Series
By Jack Irvin, Alyssa Lapid and Grace Wehniainen
Pat McGrath On Her New Star Wars Collection & “Alien-gelic” Skin
By Erin Stovall
An Unbiased Review Of Mooncat Nail Polish
By Olivia Rose Ferreiro
Get Even More From Bustle — Sign Up For The Newsletter