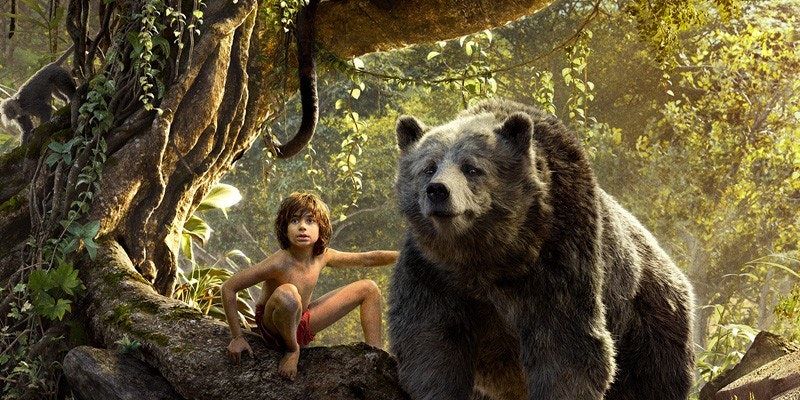 After the likes of Maleficent and Alice in Wonderland, the latest live-action adaptation of a classic animated Disney film, The Jungle Book, has hit theaters. A recreation of the 1967 animated version, this modern update uses stunning CGI imagery to bring the jungle full of animals to life, including Kaa, an Indian python. Unlike in the original, the 2016 Jungle Book makes Kaa female.

I think it's great that director Jon Favreau noticed that there was a bit of gender inequality going on in The Jungle Book and decided to switch one of the characters to female. As he said at the film's Sydney premiere, according to Stuff, "It's a different time. It just seems like an imbalance to have all male characters. We wanted to make a Jungle Book for our generation." Yet while I applaud Favreau for taking the initiative and noticing the dearth of women in Hollywood blockbusters in general, I find it odd that, of all of the characters in The Jungle Book , the one that was changed to a woman — and one of the film's only two female characters — is a snake.

In Kipling's original tales, Kaa, a male Indian python, is actually one of the protagonists. He's a trusted friend to Bagheera and Baloo, and he saves Mowgli's life on multiple occasions. There's no official reason why Disney, when making the 1967 film, changed Kaa from a confidant to a villain, but it may have been the result of popular Western opinions of snakes at the time, which was, and still is, that they personify untrustworthiness, sneakiness, and are associated with the devil.

That devilish association, of course, originates in the Bible. In the story of Adam and Eve, Satan appears to Eve as a serpent who tempts her to eat the fruit from the Tree of Knowledge. She then gives the fruit to Adam, and, as we all know, they're kicked out of paradise. That Eve's temptation by the snake led to the downfall of man instigated the idea that "dangerous" women have an association with serpents. So-called sinful women, sexual women, and un-pure women throughout history, art, and religion have been depicted with snakes. For Freud, the snake was a basic phallic stand in for male genitalia, and women who dreamed of snakes were associated with sexuality, male figures in their life, and increased libido.

So it's interesting that, with The Jungle Book , Favreau turned to Scarlett Johansson, considered by many to be one of the sexiest women alive, with one of the sexiest voices, to voice Kaa. The actor's smooth, deep voice, added to the slithering, curving movements of a snake, gives the character an undeniably seductive feel. That Kaa tries to consume Mowgli, called a "man cub," mirrors Eve's causing the downfall of man. Kaa tricks him like the serpent did Eve, like Eve did Adam, and tries to lure him into a trap with her wriggling tongue and slick body. Her single scene is about as sensual as you can get in a movie made for kids, and you don't need Freud's credentials to sense the innuendo. Even Johansson has acknowledged it, saying to USA Today, "Kaa seduces and entraps Mowgli with her storytelling. The way she moves is very alluring, almost coquettish."

This isn't necessarily a bad thing — biblical associations aside, Kaa is an intriguing character responsible for some great suspense in the movie. But what's frustrating is that she's one of just two female characters in the film, and the film's only other female character is Mowgli's mother, the kind, nurturing wolf Raksha, voiced by Lupita Nyong'o. By having these be the only non-male characters in the movie, The Jungle Book fulfills a tired trope of on-screen women only being allowed to be pure, maternal figures, or sensual deviants. It's a trend that stems from Freud's theory of the Madonna-Whore complex, and as an entertainment trope, it's been seen in countless films: Snow White, Cruel Intentions, Saturday Night Fever, and so many more.

Favreau's intentions — to expand the movie's female presence — were clearly good, and not every viewer is going to associate Kaa with evilness, nor Raksha with purity. And there's no denying that The Jungle Book is a fun movie with truly stunning visual work that's certainly worth seeing. But it just goes to show that even when trying to be inclusive when it comes to gender, Hollywood filmmakers have to take extra steps. It's not enough to make sure women are included — it's important to examine how, where, and why women are included. Maybe in the Jungle Book sequel, Favreau and co. will choose to add some more female characters to the mix who don't fall so cleanly into on-screen tropes.

More like this
12 ’90s Movie References You Missed In 'Do Revenge'
By Radhika Menon
15 Offensive AF Jokes In 'Friends' That Really Aren't OK
By Tolly Wright, Bustle Editors and Meguire Hennes
Harry Potter's Viktor Krum Has Undergone A Huge Transformation Since Hogwarts
By Sam Ramsden and Meguire Hennes
Is 'The Woman King' Based On A True Story? The Female Agojie Warriors Did Exist
By Radhika Menon
Get Even More From Bustle — Sign Up For The Newsletter