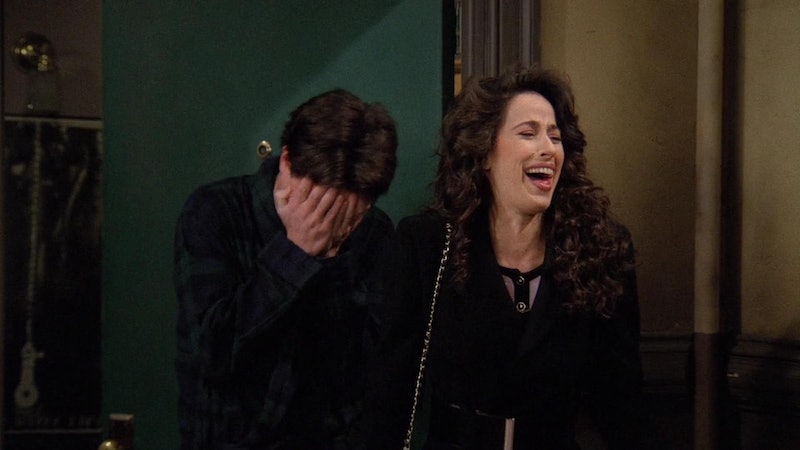 In 1994, during the first season of Friends, the world was introduced to an unforgettable character with an even more unforgettable laugh: Janice Litman Goralnik, who would briefly appear as Chandler's girlfriend — and then proceed to make appearances on the show almost every season as Chandler's ex-girlfriend, and then, later, briefly, as Ross's fling. Although every one of the characters acted like Janice on Friends was an imposition, an annoyance, and a mistake that Chandler couldn't help making, the truth of the matter is that she was actually the best character on the show.

Her enduring appearances on the show were perhaps thanks to the affection with which she was played by the voice actress/comedienne Maggie Wheeler, who said about her experience of auditioning for the role: "I saw the slides for that character and it said 'fast talking New Yorker' and you know, I grew up there and I know those people." The show made it pretty clear what our reaction to the character was supposed to be: every time Janice entered a room with her trademark "Oh. My. God.," all the characters would greet her with eye rolls, looks of panicked dread and even sprinting to hide from her.

But what exactly was so awful about Janice Litman? Sure, she had a honking laugh and a nasal voice, but that was about it. She was cute, she was fun, she was downright funny in places. In short: why didn't any of the characters see what I saw: that Janice Litman wasn't terrible, she wasn't even just OK, she was THE BEST.

So much of Janice's presence in the show is her behaving incredibly considerately around this group of people who act like she's a bad smell. When she finds out Joey hates her in Season 3 Episode 1, she doesn't hold any grudges or even act passively aggressively towards him: she confronts him about it and offers up a solution — that they should spend a day together for Chandler's sake. They go to a Mets game and for Chinese food, and, by the end of the day, even her worst enemy Joey has to concede that she's a pretty cool lady.

And cool's certainly the right word, if for all the wrong reasons. I'd say the only serious flaw we can really accuse Janice of having is of being a "cool girl" as defined in Gillian Flynn's novel Gone Girl:

"Cool Girls are above all hot. Hot and understanding. Cool Girls never get angry; they only smile in a chagrined, loving manner and let their men do whatever they want. Go ahead, shit on me, I don’t mind, I’m the Cool Girl."

Let me give you a quick reminder of Janice and Chandler's trajectory in Season 1: Chandler breaks up with Janice. Wait, no, Chandler doesn't even have the cojones to do it himself, so Janice gets broken up with... by Phoebe, for Chandler. And if this wasn't humiliating enough, Chandler reunites with Janice on New Year's Eve so he'll have someone to spend New Year's Day with and breaks things off again that same night because she's annoying him.

Cut forward to Valentine's Day, when Chandler goes on a blind date and the woman is, of course, Janice. After getting drunk and sleeping with her, he breaks up with her in the morning, to which Janice's response is the chillest thing ever. She says it's fine with her; she knows they'll end up back together one day. Gurl, please. Did she really think someone who kicked her to the curb with such ruthless frequency was who she was supposed to end up with?

Whatever the case, it gave me a whole new perspective on Friends. The obvious interpretation of Friends is that it's about a loveable gang of peculiarly photogenic 20omethings struggling to make it in their careers of choice while landing their tru-love soulmate. An alternative interpretation could, however, be about a group of hyper privileged people who are incredibly snobby about one of their number's (admit it! She is) hot girlfriend — because she has the accent and mannerisms of someone from Staten Island.

Admit it, you guys. Janice was generous, warm and witty. She wasn't the horrific monster the Friends gang wanted you to think she was: she was the best. Re-watching Friends just makes it clear that Janice was too good for the Friends, not the other way around.

More like this
“The Door Is Always Open” For Another 'Breaking Bad' Spin-Off, Says AMC Boss
By El Hunt
Emma Thompson, Lashana Lynch, & Stephen Graham Lead Netflix’s 'Matilda'
By Sophie McEvoy
Who Is Liam Neeson's Character In The Obi-Wan Kenobi Finale?
By Kadin Burnett
Viktor Hargreeves’ Coming Out Scenes Are The Sweetest Part Of Umbrella Academy Season 3
By Gretchen Smail
Get Even More From Bustle — Sign Up For The Newsletter