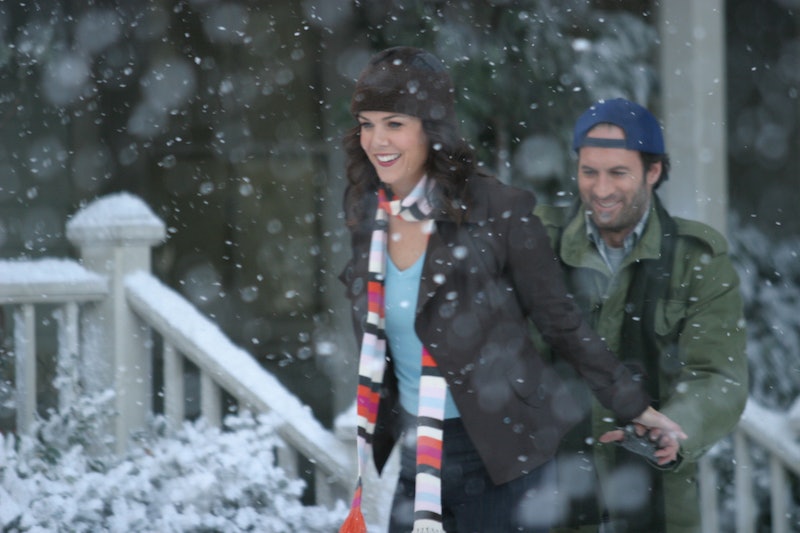 I am not typically one for conspiracy theories, but I have to admit, this new behind-the-scenes photo from the Gilmore Girls revival set has my wheels turning. No, not because of any specific actor appearing in it, or because there was a kid photographed that looked particularly similar to any of the characters, either. This behind-the-scenes Gilmore Girls picture of Luke's iconic truck only shows us an inanimate object. But, as you know, it's so much more than that, and it's importance is amplified because of one very big detail. You see, Gilmore Girls fans, Luke's truck covered in snow.

Now, what's the big deal about Luke's truck covered in snow? Aren't trucks made for that kind of thing? Well, sure, I suppose they are. What's interesting about it being Luke's car that's covered in the fluffy precipitation is that, if you didn't know, the episodes are being sorted by season, which means someone (probably Luke) has got Luke's truck in the "Winter" (or possibly "Fall") episode, as Bustle write Emily Lackey has previously surmised. But, the real kicker here, more than the appearance itself, is that Luke's car is appearing in an episode, covered in snow, considering that Lorelai Gilmore is the biggest fan of snow probably on planet Earth.

Don't recall Lorelai's affinity for the cold, white flakes? Refresh your memory with the video below. Girl even knows the smell of it (to Rory's old soul chagrin).

Another important thing to note, is that snow (and the cold) has previously meant big, grand gestures for Luke and Lorelai as well.

I can't help but feel that this snow and the truck really means something for them. Does he make an epic return? Is Luke driving in the snow to finally get his girl? Does his car break down and Lorelai helps him to fix it? Are they driving to their wedding? The powers that be, please let a girl know. Does the snow signify a full circle moment? Does it "get Luke and Lorelai back together," as Luke once united Lorelai and the snow?

Listen here, guys. Whatever is going on with Luke's truck and the snow has got to do something with Lorelai, and it has to be epic. It just has to.