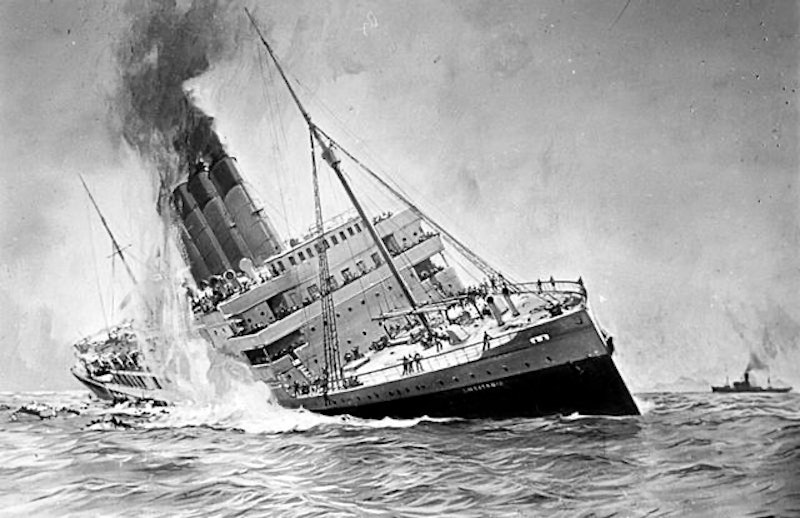 She had crossed the ocean over 100 times already, but on her 101st trip, the famous British ocean liner, RMS Lusitania, carrying nearly 2,000 people, was hit by a torpedo and sank just hours before she was to make her scheduled docking, killing nearly 1,200 people. It all sounds too unbelievable to be real, but is the tragedy in Erik Larson's Dead Wake a true story? Like his previous books, The Devil in the White City and In the Garden of Beasts, Dead Wake may read like fiction, but it's heartbreaking and mysterious story is true.

On May 1, 1915 — less than a year after the outbreak of the first World War — the Lusitania, a massive British ocean liner that, at one time, boasted the title of the world's largest passenger ship, left New York headed for Liverpool, carrying with her almost 2,000 passengers and crew members. A non-military ship, the Lusitania was still sailing precarious waters, as Germany had declared unrestricted submarine warfare in British waters and had already sunk several merchant ships using their U-boat's torpedoes. Despite the obvious danger, the official warning issued by the German Embassy in Washington, D.C., and the recommendations of the British Admiralty for boats to avoid the area, the ship still set sail with captain William Turner at the helm for what would turn out to be her last voyage.

During the journey from New York to Liverpool, Turner received multiple warnings about active German U-boats on the boat's course, but the experienced captain kept the boat on track, feeling confident in his ability and years of experience — that is, until an unexpected fog rolled in. On May 7, the same day the Lusitania was scheduled to dock in Liverpool, Captain Turner slowed the ship down in order to navigate the tricky weather, a decision turned out to be a fatal mistake.

Just mere hours before it was supposed to reach its final destination, the Lusitania was hit by a torpedo from the German U-boat U-20 less than 15 miles off the shore of Ireland. It only took 18 minutes for the massive ocean liner to sink. Out of the 1,959 men, women, and children aboard the ship, 1,195 of them died, including 123 Americans.

Though the United States wouldn't enter WWI until two years later, American citizens and politicians alike were outraged by the tragedy, and the sinking of the Lusitania was a major influence in the country's decision to join the conflict.

In the wake of the tragic sinking of the Lusitania, more questions arose than answers. The ship was struck by only one torpedo, yet there were two explosions that lead to its sinking. What caused the second explosion? While some think it was the ship's boilers, the cause could be linked to the fact the Lusitania was actually secretly carrying wartime supplies. The secrets surrounding the boats contents, as well as the mystery surrounding who knew what, including whether or not officials were aware of the U-boat's intention, has led to years of speculation, conspiracy theories, and endless questions about what happened that tragic day.

Erik Larson's Dead Wake recounts this tragedy from both above the water and below. Switching between the perspective of the German U-boat, waiting in the depths to attack, and the crew and passengers aboard the Lusitania, unsuspecting victims of what seems like an avoidable tragedy, Larson's narrative is based in facts but driven by drama. Emotional, evocative, and terrifying, this in-depth exploration of a familiar story reveals there is so much more about this tragedy than we ever knew.

A gripping story that reads like a mystery at high seas, Dead Wake is anything but fiction.