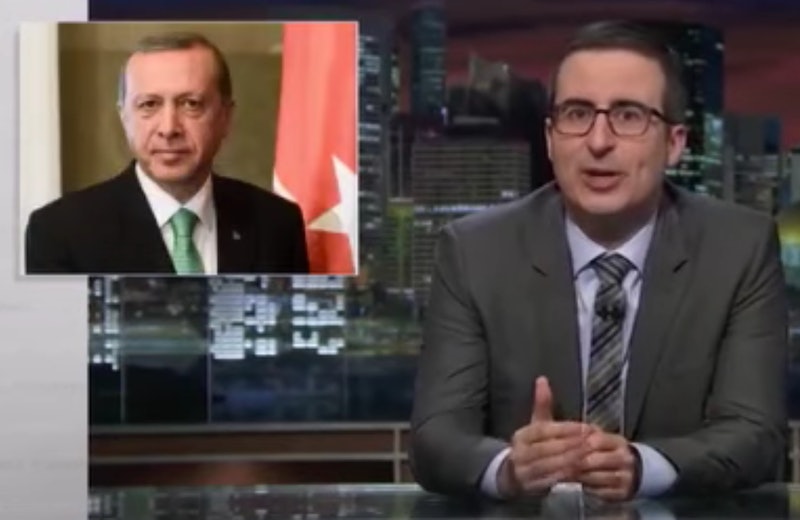 On Sunday's episode of Last Week Tonight, John Oliver took on some political news from Turkey — "a country, a bird, and the meanest thing you could call someone in 1956." Despite the country sharing its name with an old schoolyard taunt, its leader doesn't seem to have very thick skin. Remarkably, it seems that Turkish President Recep Tayyip Erdoğan had his feelings hurt by a comedian who mocked him on German television. And wait, it gets better. He turned to Germany Chancellor Angela Merkel to get even, asking her if he could press charges.

Even more ridiculous is that Merkel relented. According to Deutsche Welle, Germany's leading broadcast, she accepted Turkey's request to allow a criminal probe looking into comedian Jan Böhmermann, who read a crude, satirical poem on air. Among other things he called Erdoğan a "professional idiot." Why Erdoğan feels the need to press charges totally baffles Oliver. "He wants to lock someone up over a poem," Oliver said. "Why doesn't he just do what the rest of us do about poetry? Listen to it politely because it's how Sara has chosen to cope with the divorce."

In any case, Erdoğan won't let it go. Evidently, there is a German law (written in the 18th century) which states: "Anyone who is guilty of an insult to the sovereign or regent of a state... shall be punished by imprisonment..." So yes, the comedian Böhmermann may even face jail time — up to three years' time — something that Oliver would not like to see happen to comedians in the United States.

For the record, let me just say that I am very glad that America does not have a similar law. Or I would be in a maximum security prison right now — and I would not thrive there.

The whole situation puts Merkel in a complicated position. Erdoğan is key to the plan to keep Syrian refugees and other migrants from crossing the Aegean sea from Turkey into Greece. Any who have entered Greece since April 4 are being sent back. Her move has angered many Germans — her cabinet is even split on the matter. To appease critics, she has promised to repeal the law — but any changes would not take effect until 2018.

In Turkey, this is old news. Nearly 2,000 court cases have been brought against individuals who have insulted the president. One such case was brought against a man who shared a meme suggesting that Erdoğan's facial expressions were similar to Lord of the Rings' Gollum. Judge that one for yourself.

Check out the rest of the segment and be glad that Oliver's jokes won't land him in jail — at least, not in the United States.