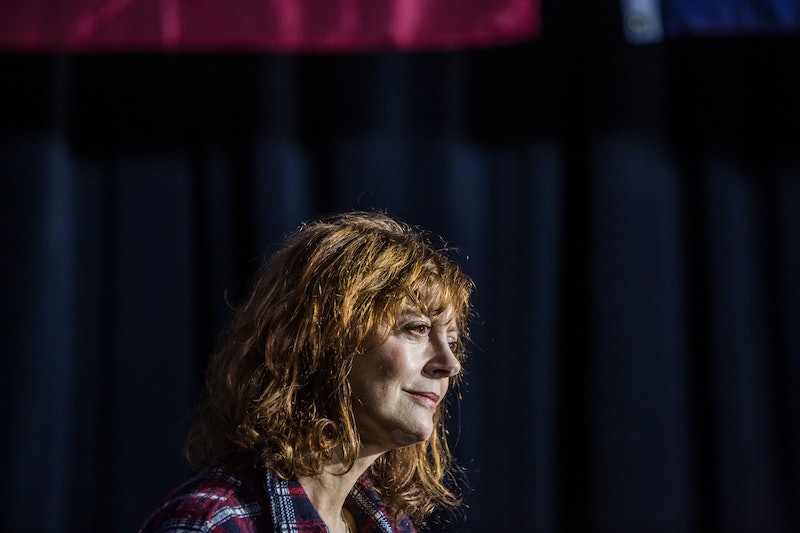 If anything's for certain about Oscar-winning actor and longtime political activist Susan Sarandon, it's that when she has something to say, she doesn't hold back — whether it's about LGBT rights, the war in Iraq, or, as shown most recently, her support for Bernie Sanders. Sarandon is one of the Democratic candidate's most vocal celebrity backers, and even when her opinions have gotten her into some trouble — such as her recent comments implying she might vote for Donald Trump if he were the nominee opposite Hillary Clinton — she's refused to back down. In fact, when I talk to her on April 18, one day before the New York primary, she seems more confident than ever that Sanders deserves the nod over Clinton — and in fact, that he might be the best chance American women have at one day getting a female president.

"I think we will have a woman president at some point, and I hope that she doesn't have to be rich or married to an ex-president in order to have that shot," says Sarandon, speaking during promotion of her new film The Meddler. "And I think Bernie Sanders is the one that stands the best chance at creating that situation, because of his consistency and moral core."

For Sarandon, the fact of Clinton's gender — and, thus, the possibility of America getting its first female Commander in Chief — isn't a reason to support her.

"You can't just go by gender when you're trying to choose a candidate," she says, with emphasis. "The younger women that I've met have been so educated — the ones that are for Bernie — and it didn't even enter their consciousness that they had to support a woman just because she was a woman. It's been the older celebs and women that I've met who feel that this is an opportunity [for a female president]."

Perhaps she's referring to her recent Twitter feud with actor Debra Messing, a passionate Clinton supporter; at the end of March, shortly after Sarandon's Trump comments, she and Messing engaged in a heated debate over their candidates of choice that quickly turned personal. Although the fighting has ceased, Sarandon continues to push several of the points made during the argument — namely, that Sanders would be a better option for women and minorities than Clinton would be.

"[His candidacy] really has convinced me that there could be a change, and we need that for women and minorities and to get out of that war cycle that we're in," she says. "I haven't seen that kind of passion about taking the country back — I don't remember the last time, really, that that's happened."

Sarandon, who's spent the last several months canvassing for Sanders in places ranging from Maine to Idaho, says it's millennial voters who have "led the charge" for the candidate's success so far, the "kids" she's met on the campaign trail. These Sanders supporters, she says, give her "such hope for the future" — and it's clear that, if Sarandon and her fellow Sanders supporters get their wishes, it's one that won't feature Clinton as the Democratic nominee.