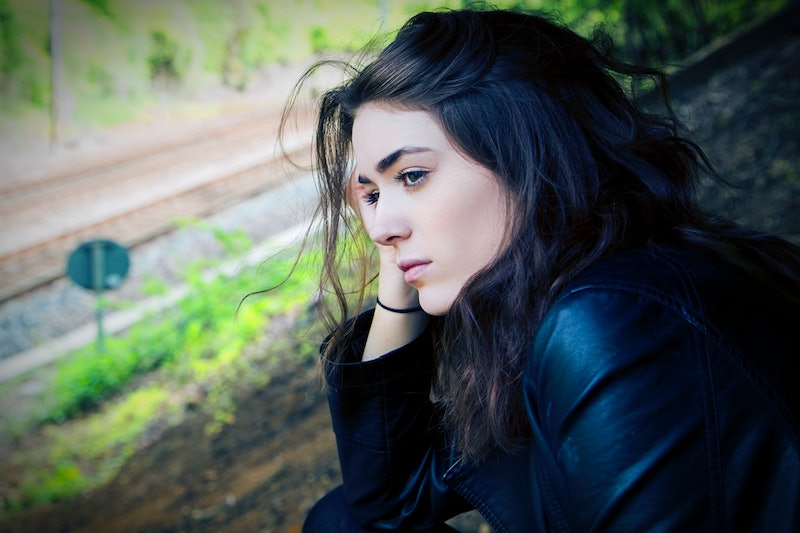 The tricky thing about a breakup is you can never 100 percent prepare yourself for one. Often times, you don't even it's coming, let alone know how to deal with the aftermath. A heartbreak is hard enough, so knowing how to prepare yourself for after a breakup is key to moving forward. There's not a fail-proof guide with instructions on how to get over an ex. It's really through the process of it that you learn the best way to cope for yourself. Furthermore, everyone grieves differently. Some people (like myself) have tissues basically glued to their eyeballs, while others barely react at all outwardly. Some people need their closest friends to bring over bags of chocolate, while others would rather be left alone and process things independently. There's no one "right" way to deal with a breakup.

However, there is one thing that is certain; there will be things you need to prepare yourself for. Things that are bound to happen to any broken up couple. And, it's better to be prepared rather than feeling like you've been hit out of nowhere. Being a relationship expert and life coach, I know how devastating it can be to have broken heart. It can be emotionally, mentally, and even physically (it's called a broken heart for a reason) painful. So, buckle up and prepare yourself, because it's going to be a long road. Here are all of the things you should prepare yourself for after a breakup — just in case.

You tell yourself, "I'll just look at his or her Instagram one more time and tomorrow I'll stop." But do you ever stop? No. It starts to get addicting and you want to keep up on your ex's life, so what's the harm? The harm is that you might come across something that is difficult for you to see. Also, if you're trying to move forward, constantly analyzing each new friend your ex has or pictures he or she likes is a step backwards.

2. Your Ex Starting To Date Again

No matter how much you want to believe that your ex won't even look at another person in that way, it's inevitable. I know it's not easy to hear that, but you should prepare yourself for that moment you see him or her "in a relationship" on Facebook, or Instagram, or you just hear about their new SO through the grapevine. You just have to remind yourself that you and your ex aren't together for a reason, and that you deserve to find someone who is a better fit for your life and personality — and so does your ex.

3. Feeling Out Of Control Emotionally

When your heart is aching, you can start to feel like you're losing all control of your emotions. That's completely normal. You might find yourself crying to a complete stranger out at a bar. Or in Target suddenly crying over that one object that reminds you of him or her. Just let them come out and let go of caring what others around you think. Trust me, they've all been there too.

Whether it's making out with that one friend that you know is madly in love with you, or getting an interesting and bold new haircut, you might have moments that you later look back on with feelings of regret. But the truth is that these are completely normal and actually should happen to you. This is how you'll get to know yourself as a newly single human, and even if the haircut or hookup doesn't turn out as great as it seemed initially, you can look back and learn from it and, most important, laugh a little, too.

5. Having Moments Of Wanting To Get Back Together

When you are with another person for a significant period of time, they work their way into most aspects of your life. Breaking up with that other half and going cold turkey in terms of hanging out or talking daily is hard for any person, no matter how strong they are. Just know that it's fairly common to have feelings of "maybe this was a mistake" and questioning the whole entire breakup, no matter how sure you were of the breakup at the time. This will eventually pass, though, and you will be on the other side in no time.

6. Realizing Being Single Is Amazing

Once you get into the groove of being single, you will start to learn how to be completely independent again and think about you, and only you. When you have thought about another person for so long, sometimes you lose parts of yourself, and forget about your specific and individualized wants and needs. This is the time to fall back in love with yourself. You'll soon realize the wonderful aspects of being single and, most importantly, probably have a lot of fun.

7. Not Being Able To Feel Anything At All

The bottom line with breakups is that nobody grieves in the same way. It can be common for some people to have moments where they feel numb. Splitting up with your partner involves so many emotions that it can be too much to bear or deal with all at once. You might shut down and choose not to feel any of them at all — let alone all of them at once. Don't force any feelings upon yourself. Give yourself time.

8. People Wanting To Know What Happened

If there's one certain thing on this list, it's this one. People often want all of the details of what happened and what went wrong. It's not your job to tell anyone anything you don't want to, though. This is your own life and you can keep it as private as you want to. However, prepare yourself to ward off these gossip seekers with a response that will communicate your lack of desire to reveal the details. And if talking about it is something that does help you deal with the breakup, then chat away! Everyone is different, but you're never obligated to talk about the breakup if you don't want to.

9. Having A Social Media Makeover

One difficult part after a breakup in this day and age is dealing with the social media memories that are left behind. Often times, after a breakup, people have to decide how to remove their ex from their profiles. Do you want to delete all pictures of you two, as if the relationship never happened? Do you want to change your relationship status to "single" right away? Some people even go MIA on Facebook and Instagram for a while just to cope. Everyone will have a different response to this, but it's crucial for you to put some thought into what you want to do, and to decide what will make you feel the best.

People like to talk. That means that people closest to you are probably going to be discussing their theories of why you two broke up. You can't control what people are going to say, and it's something you just can't give focus to if you're trying to move on from the relationship. At the end of the day though, rumors mean nothing about you or your past relationship, so it's best to ignore them completely. Do you think celebrities address every rumor they hear about themselves? No, they are too busy being fabulous — and so are you.

Unfortunately, friends tend to take sides after a couple breaks up. It can be awkward for friends who knew one half of the couple first, or have a deeper connection with one person or the other. Even if it's not a conscious decision on their part, you might notice that you see some friends less and less after a breakup. But the good news is that if they are so quick to peace out on you, they probably weren't that great of a friend in the first place. You may realize that the only reason you were friends with them was because of your ex. Your true friends will be easily seen to you by their effort to be there for you during this time of need. You don't want any frenemies around you.

Breakups can be many, many things. For some, they can be quick and painful. For others, they can be long and frustrating. For everyone, though, they are difficult. And the aftermath of a breakup is often the hardest part of all. Whether all of these things happen to you in the wake of your breakup, or only one or two, it's always good to have an idea of what lies ahead of you.