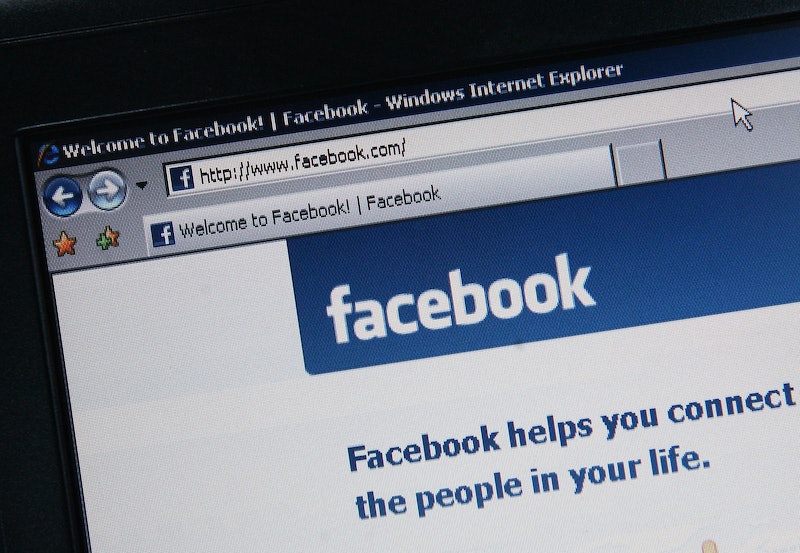 If cheating— whether or emotional or physical— is a problem in your relationship, it may time to reassess your social media behaviors. A new survey has drawn the links between Facebook and your relationship troubles. It's not the first time we've found out that Facebook can affect relationships, but this survey provides a breakdown of exactly why — as in, what we're doing to piss off our partners and whether we're being downright unfaithful. Stop Procrastinating, a temporary website blocker that combines psychology with technology, surveyed 5,000 Facebook users and found out there were a whole lot of ways behavior on the social media site could damage your relationship.

Forty-seven percent of users admitted to emotional cheating on Facebook. That's nearly half of people owning up to the fact that they are engaging in not OK behavior on Facebook... yikes. And emotional cheating is no small thing— there can be huge breaches of trust and entire relationship breakdowns that don't ever involve your partner hooking up with someone else. And Facebook, with your ability to connect with everyone you've ever met (or had sex with) or would want to meet (or have sex with), is unfortunately the perfect facilitator for emotional infidelity.

But it's not just the emotional cheating, Facebook can be tough on relationships for some of the reasons listed below, too. But first, check out the latest episode of Bustle's Sex and Relationships podcast, "I Want It That Way":

1. Some Say It's A Romance Killer

Forty-four percent of respondents said that Facebook had ruined romantic moments because their partner felt the need to update in on Facebook. Come on, guys. Even if you're obsessed with social media, can it not wait until after?

2. A Third Of People Said There Was A Loss Of Intimacy

Seriously, put the phone down. Thirty-two percent of people reported a loss of intimacy because their partner had checked Facebook while in bed. The bed is a sacred place for sex, cuddling, and assorted snacks.

As in, jealous of their partner's other Facebook connections and how they're interacting with them.

4. It Makes Cheating Easier For Some

5. We're Monitoring Each Other

Forty-six percent of people said they had checked their partners' Facebook accounts because they were jealous. That's a whole lot people feeling insecure and jealous. It's maybe why 67 percent of respondents were not at all surprised that Facebook came up in divorce cases as evidence of an affair.

While of course these things won't be the case for everyone, they're an important reminder to be mindful of how our behaviors on the site — and with technology in general — are affecting our relationships.

More like this
The Best Time To Date After A Breakup, According To Experts
By Bustle Editors
Are Virgo & Capricorn Compatible In A Relationship?
By Kristine Fellizar
7 Women Share Their Best Orgasm Stories
By Lexi Inks
Hinge's New NFAQ Feature Is Demystifying Queer Dating
By Emma Carey
Get Even More From Bustle — Sign Up For The Newsletter