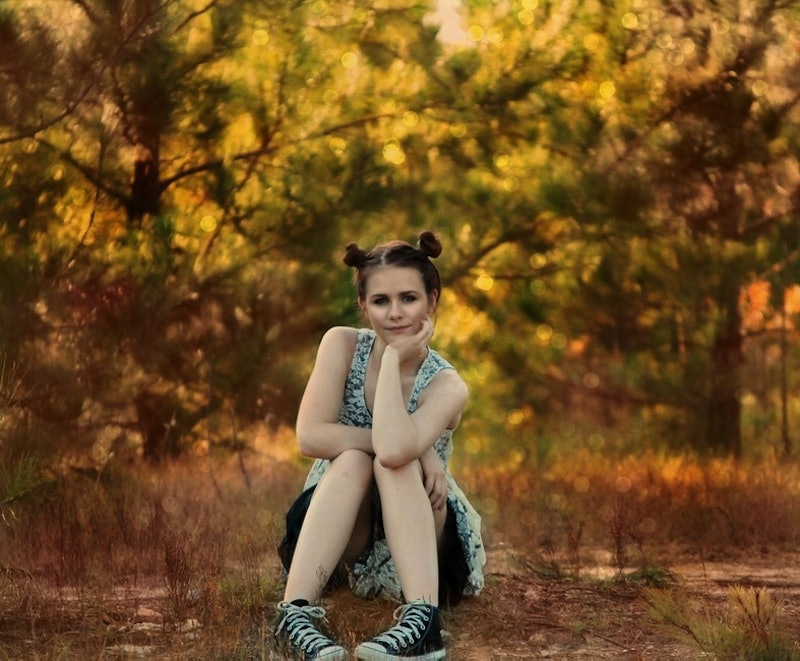 When it comes to being an adult, you'll likely find yourself in many situations where appearing more approachable can really come in handy. Think about social meet ups, first dates, and networking events — all instances where being approachable can lead to new friends, new partners, and maybe even a new job. See? Quite the skill to have.

And yet, appearing approachable is often far easier said than done for a lot of people. If you're shy and introverted, or just plain old nervous in public, then the idea of appearing anything other than freaked out might seem impossible.

When that's the case, social situations can be quite the confusing, and even disheartening, experience. As social anxiety disorder expert Arlin Cuncic said on SocialAnxietyDisorder.About.com, "People with social anxiety disorder (SAD) are often mistaken for being aloof or disinterested. If you struggle to meet new people or join in conversation at social gatherings, it might be that your body language is sending the message for others to stay away."

This is definitely something to keep in mind, social anxiety or not. Paying attention to your vibes is pretty much all it takes to appear more approachable, and attract more people and opportunities to you life. So, if you're ready to head out for that job fair, or first date, then take along some of these tips for appearing more approachable.

1. Keep Your Head Up

If you're feeling nervous or shy, it's totally normal to hang your head, or hide behind your hair. But take a second to imagine how this looks to everyone else. Yeah, not so inviting. That's because hiding your face makes it really difficult for people to approach you, since they can't get an idea of your availability. As Cuncic explained, "... they need to see your face to feel like you want to get to know them." So if you're in the mood to be social, be sure to look up and out at the room.

As with hiding your face, closed off body language makes it look like you want to be left alone. Crossing your arms, crossing your legs, turning away — it all sends a "leave me alone" message, whether you mean to or not. Instead, try to keep your arms down at your sides, as well as some space open between your legs when standing, as Margrit Bradley suggested on HealthGuidance.org. This is a comfortable "open" stance that gives off warm, inviting vibes.

3. Remember To Crack A Smile

If a neutral facial expression comes naturally, then of course you should always do what feels right. But it is worth knowing that other people don't always view neutral faces as entirely friendly. In fact, studies have shown that people often misconstrue neutral faces as slightly negative, according to an article by Laura Schaefer on Match.com. Shocking and unfair, but yet definitely something to keep in mind.

Another way we unintentionally ruin our social chances is by hiding behind things. Think about standing half-behind a friend at the bar, or nervously clutching a coffee mug or book to your chest. These are all ways of trying to disappear, and they don't do many favors in the approachability department. So, as Cuncic suggested, get in the habit of holding things down at your side, and keeping your body open. This will allow you to appear less guarded and closed, and in turn way more approachable.

5. Mirror The Other Person

Mirroring is where it's at when you want to appear approachable. Not to mention it's a pretty cool thing we do subconsciously when we like someone. Think back to times you started gesturing like your best friend, or that time you ended up sitting the same way as your crush. That happened because when two people are getting along, they unintentionally copy each other's body language. According to Carol Kinsey Goman on Forbes, "It’s called limbic synchrony, and it’s hardwired into the human brain." This is something to keep in mind when meeting someone new. Copy their movements, Cuncic suggested, and match their intensity. Just don't overdo it, or it will be totally obvious (and weird).

I know, eye contact can be awkward. And if you're kind of an introvert, it's often even more awkward. But, while averting your eyes may feel natural, it does have a way of closing many a proverbial door. As Bradley said, "When someone is thinking about approaching you they might try to make eye contact to essentially 'suss' out the situation. If you look down or away when they try to attract your attention this will make you look unreceptive and uninterested (it can also be quite rude)." So, however difficult it may be, try looking at people, and eventually you'll get used to making better (and more) eye contact.

7. Angle Yourself Towards People

This body language cue is pretty cool. Apparently, if someone really wants to leave a situation, they will subconsciously angle their feet towards the exit. As Joe Navarro, M.A., said on Psychology Today, "This is an intention cue and we have several that we use to reflect our needs to do something." You know, like run screaming from a room. But if that's not your intention (at least not right now), then make an effort to angle your body towards the people you are with. They will pick up on it, and feel more welcomed.

I don't know about you, but my phone is my go-to comfort device in hairy situations. Alone at the coffee shop? Phone. Feeling shy at the bar? Phone. It certainly is comforting, and is a great way to look not-so-alone when out in public, but it isn't exactly the best way to meet new people. As noted in article on ScienceOfPeople.com, "Introverts tend to check their phone when they are nervous, but this puts you right into defeated body language. So try to avoid checking your phone when you want to feel confident and again try to relax and be expansive."

9. Try Not To Slouch

This one isn't such a big deal at, say, a party or at the bar. In those situations, by all means, slouch away. But slouching can really give off the wrong message at more formal events, such as career fairs or job interviews. As Tanya Kertsman said on CareerContessa.com, "Slouching makes you look as though you’re bored and disengaged, and leaning forward too much can make the interviewer feel crowded. Standing up straight instills a sense of confidence and ownership of the situation. To the interviewer, it makes you look taller but also more capable and self-assured."

Again, it's totally normal to bite your nails to kingdom come, or twirl your hair nervously. And yet, nervous habits like these have a way of signaling to others that you aren't ready (or willing) to chat. According to Kertsman, "Whether it’s tucking your hair behind your ear, touching your face, or tapping your foot, nervous gestures creep up out of nowhere. They can make you look distracted or, worse, showcase insecurity. Be self-aware. Take control by placing your hands on the table or on the armrest." Or keep your hands busy with something else if the urge fidget is strong.

11. Stay In Groups Of Three

OK, so let's pretend you're at the bar, or a networking event. It can be tempting to circle up in a huge group, or pair off with someone you know. But these types of overly-large, or overly-exclusive groups, tend to be less than inviting to others. That's why standing in groups of three is a much better way to be approachable. As Meghan Casserly noted on Forbes, "This rule of three is just as effective in bustling conference rooms as in bustling bars, for men as well as for women. Introducing yourself to a group of ten people is downright scary, as is two who appear locked in conversation." So stick to smaller groups, and watch in awe as people come over to join.

Nervous or not, appearing more approachable really all comes down to body language, and appearing open and ready to talk. Simply pay attention to your vibes, and at least look ready and willing to chat, and I'm sure the opportunities will flow on in.