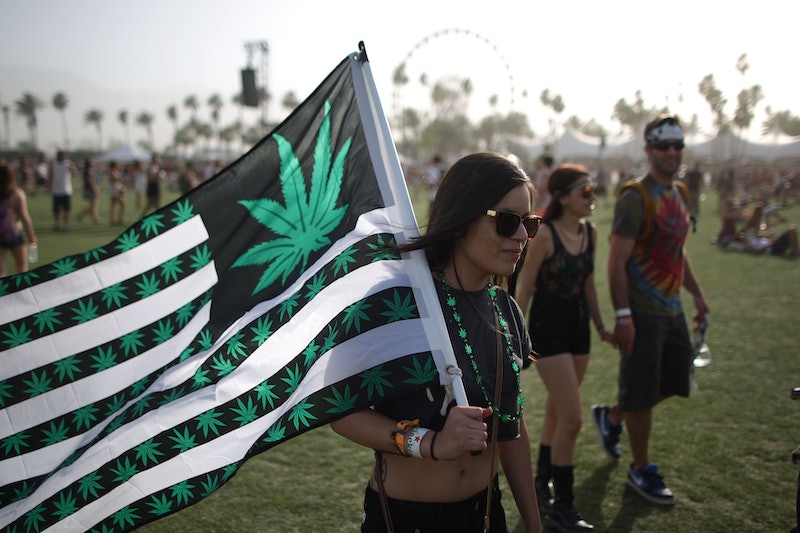 April 20 is here and there's no doubt about how observers of 4/20 will be celebrating the holiday. Weed will be the recreation facilitator of choice, and in addition to lighting up, many marijuana enthusiasts will gather for marches and rallies to push for legalization. But, how did 4/20 start? While how to partake is clear, the origin of 420 — as National Weed Day and as a number that declares one's propensity to puff-puff-pass — is a bit more cloudy. "420" first entered into drug parlance years ago, becoming the codeword of potheads and a signifier of "cannabis culture" used throughout pop culture. Most of the clocks in the cult classic Pulp Fiction are set to 4:20, and the scoreboard in Dazed and Confused reads 42 to 0. Though the number's use has become more commonplace — as marijuana use becomes more widely accepted and also legalized — its beginnings have long been disputed. How exactly did this particular date and time become so engraved in the common identity of pot lovers the world over and why are its origins such a mystery?

The internet is teeming with speculations surrounding the true meaning of 420 and exactly how it made its way into the lexicon of stoners years ago. Some stories originate with the first deliberate trip of a different kind of drug in the 1940s, and another story goes back even further to an unfortunate birthdate in the 1880s. Some look to science for a chemical explanation for the magic number, while others investigate songs of a certain era for clues into 420's beginnings. Among these many versions of how 420 came to be, it seems that most have come to agree with a certain story. But before getting straight to the favored theory, let's backtrack to check out all the popular speculations that have since been disproven.

1. 420 is the police radio code for marijuana violations

False. While this would be fitting (but not entirely undercover), 420 is not the radio code for marijuana violations of any kind.

2. 420 is the number of the bill in the U.S. Congress to legalize weed

False. However, the California Senate Bill 420, also known as the Medical Marijuana Program Act, was named as a nod to the 420 tradition. Signed in 2004, it comes years after the existing pop culture connection.

3. 420 is the number of active chemical compounds in marijuana

False. The number of active chemical compounds in marijuana is 315, according to High Times magazine.

While this is true (as evidence by his lab notes), most argue that this wasn't the source of "420" but instead a crazy coincidence.

False. While it's often been purported that 420 somehow commemorates the death of one of these musical greats who were identified with drug use during their lifetimes, none of them actually passed on April 20. Hendrix died on September 18, Morrison on July 3, Joplin on October 4, and Marley on May 11.

While April 20 is indeed the date that Hitler was born, that certainly isn't where the tradition comes from.

The math is correct, and Dylan's song does have the refrain "everybody must get stoned," but most deny that this is the real origin.

8. 420 refers to the section of the California penal code relating to marijuana

False. Section 420 of the California penal code actually refers to obstructing entry on public land. The 420 sections of penal codes of other states also have nothing to do with marijuana.

9. April 20 is the best time of the year to plant marijuana

False. In actuality, it would vary too much from country to country, or even different parts of the same country, to nail down a date, let alone a specific time of the year, that's perfect for planting.

10. When the Grateful Dead toured, they always stayed in room 420

False. This rumor has apparently been denied by a Grateful Dead Productions spokesman, but there does remain a connection with 420 and the Grateful Dead. Deadheads can be credited with spreading the "wake-and-bake" message of 420 across the country, and the true origin is said to hail from the same Northern California county as the American rock band.

The true origin of 420 starts much like the beginning of every pot lover's marijuana story — killing time with friends after school. Various sources, including Wikipedia, Snopes, and even the BBC, agree that 420 was first coined by a group of students at San Rafael High School in the early 1970s. The pack of pot-lovers called themselves "the Waldos" because they liked hanging out in front of a wall, and used the codeword "420" to communicate with each other when and where to meet to smoke pot — "420 Louis!" meant meeting up at 4:20, after school was out and sports practices completed, in front of the school's statue of 19th-century French scientist Louis Pasteur.

According to a Waldo quoted in the San Francisco Chronicle in 2000, the simple codeword soon came to stand in for anything weed-related, with hallway whispers of 420 standing in for questions like, "Do I look stoned" or "Do you have any?" By the end of the 1970s, the term had been picked up by the Grateful Dead and their Deadhead fans, and spread to stoners across the country and eventually around the world. While the Waldos initially tried to keep their identities under wraps, with time they've come out to the media, bringing evidence to their claims with letters that are dated and postmarked in the '70s mentioning the all-mysterious "420."

More like this
What Is The Forest Personality Test? The TikTok Trend, Explained
By Georgina Lawton
This Creepy TikTok Trend Encourages Out-Of-Body Experiences
By Kaitlyn Wylde
22 Movies On Netflix That Are Perfect For The Whole Family
By Bustle Editors
Your Daily Horoscope August 11, 2022
By Mecca Woods
Get Even More From Bustle — Sign Up For The Newsletter