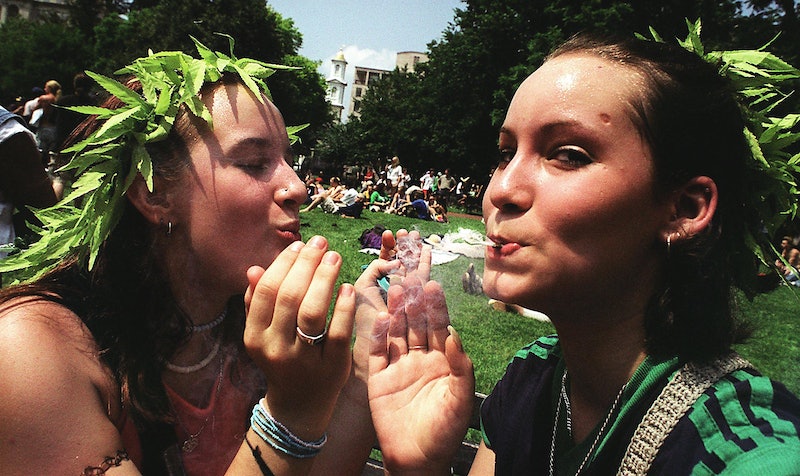 It's April 20, which probably doesn't mean much to any non-smokers out there, but to marijuana lovers across the country, this is the day to show your appreciation for all things related to weed. There are many ways to celebrate 4/20 — whether you're rallying in the streets with other fellow cannabis connoisseurs, lighting up with a few friends at home, or heading to a 4/20-friendly yoga class (which is a thing I guess, who knew?!). But for people who don't smoke weed but still want to party, or show their solidarity for those who do enjoy a good joint now and again, there are other ways to get in on the festivities. That's where this handy guide comes in.

Honestly, I'm not a weed smoker myself — but I'm all for the legalization of marijuana, and on this 4/20, there's plenty to celebrate as weed becomes culturally recognized in more and more states across the country. That, and I love a good party. Really, it doesn't matter what we're celebrating... I'm going to want in somehow. And even if you aren't a big pot smoker — or maybe you are, but you just aren't in a position to celebrate properly today — finding a way to show off your 4/20 pride isn't actually that hard. Here's everything you need to do this day properly.

The easiest way to get my attention is to say something like, "Hey! We have pizza." Food is the reason I wake up in the morning. It's the reason I dream at night. And on 4/20, a holiday dedicated to having the munchies, opportunities abound for you to stuff your face with, well, whatever the hell you want. Hold nothing back. Hit up your favorite greasy snacks with reckless abandon.

2. Go back and eat even more food

Just in case you weren't listening earlier, food is crucial to observing this holiday right. So once you're done pre-gaming with your Cheetos and your dollar pizza, go into second dinner with a plan. We're talking heaping mounds of tot-chos, bacon-wrapped Oreos, and ooey mac and cheese balls. This is not the time to be shy.

3. Catch up on Broad City

OK so you have your snacks — now sit back and unwind with a little TV. You don't have to be a smoker to enjoy the antics of Abbi and Ilana. Just relax and get ready to laugh.

4. Get lost in a good stoner read

Stoner movies are great and all, but also a little cliche. Cozy up with a joint and a good 4/20-friendly novel. From Hunter S. Thompson's Fear and Loathing in Las Vegas to The Dharma Bums by Jack Kerouac, there are plenty of books out there to give you a little intellectual high. Use this list to find a book for you.

5. Go to McDonald's for all-day breakfast

If more food establishments offered all-day breakfast menus, we would be that much closer to world peace (probably). Luckily, McDonald's understands this, and is testing out an all-day breakfast menu at some locations on April 20. Get a little crazy, and go order up a breakfast sandwich at 2 in the afternoon. On 4/20, anything can happen.

You're going to need something to wash your Egg McMuffin down with, right? And does anything sound more appealing than a Ben & Jerry's ice cream burrito? The Vermont-based company is rolling out its BRRR-ito on April 20, which is basically two scoops of ice cream wrapped up in a cone-like burrito shell. And you don't need to be a stoner do know that ice cream burritos are a gift sent from the heavens, so eat up.