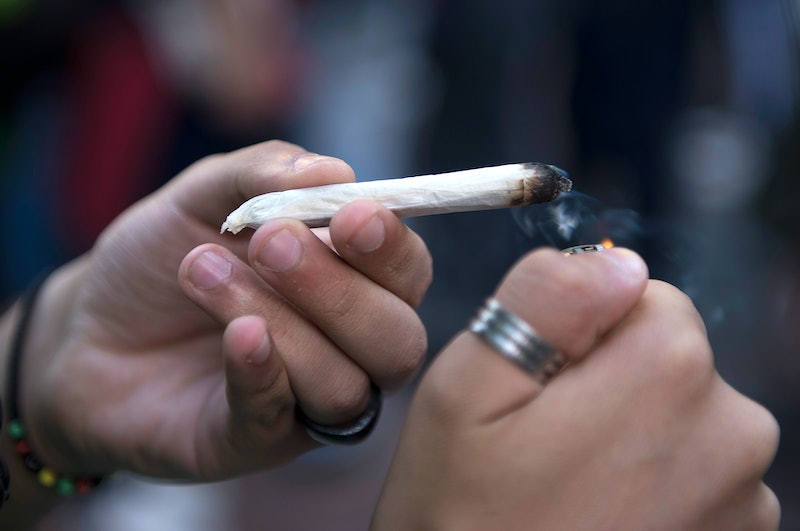 It's April 20, so marijuana lovers everywhere are lighting up in celebration. And this year, there's a lot to be excited about. Weed is becoming more widely legitimized as more states hop on the bandwagon to legalize it — it's legal in some form in 23 states, plus Washington D.C. But this day may seem a little, well, hazy to people who aren't so big into pot. What does 4/20 mean, and how did it become known as National Weed Day?

To be fair, it seems like no one really knows the story behind how 4/20 originated. According to the Internet's most trusted source for Internet slang, uh, Internetslang.com, 420 quite simply translates to "weed." One popular urban legend maintains that the term originated because there are 420 chemical compounds found in cannabis, while another claims it was a secret police code used to indicate the presence of marijuana.

A more popular story points to a northern California high school in the early 1970s, where weed-loving students would light up after class at around 4:20 in the afternoon. Eventually, the catchphrase 420 is said to have moved beyond the pot-smoking circles of San Rafael High School to become a part of the greater marijuana lexicon. There's some proof to back up this version. In 2009, The Huffington Post tracked the tradition back to a group of five friends at San Rafael High School who called themselves the "Waldos." The group apparently coined the term in 1971 as a code for when they were going to meet up to smoke pot after school.

The term apparently became popular with Grateful Dead fans, who helped to move it across the country. Today, it's used as a symbol for weed appreciation — making April 20th the perfect day to celebrate our love for pot.

Although the legalization of marijuana remains a hotly debated issue, there are plenty of people who are all for showing their support. More than 100 million Americans have admitted to smoking weed at some point, and there's even a petition being circulated on Change.org by Bill Maher for Congress to recognize 4/20 as a national holiday. "We celebrate everything from Arbor Day to Groundhog Day to a National Day of Prayer," he writes in his petition. "It’s high time we had a weed day." Unsurprisingly, it already has 12,500 supporters.

Regardless, it seems 420 is here to say, as are the celebrations that come with it. Weed is having a major moment right now, so even if you don't smoke pot, grab a few 4/20 munchies and some friends, head to the nearest park, and see what all the action is about. There are plenty of ways to show your weed appreciation — even if you don't choose to light up yourself.