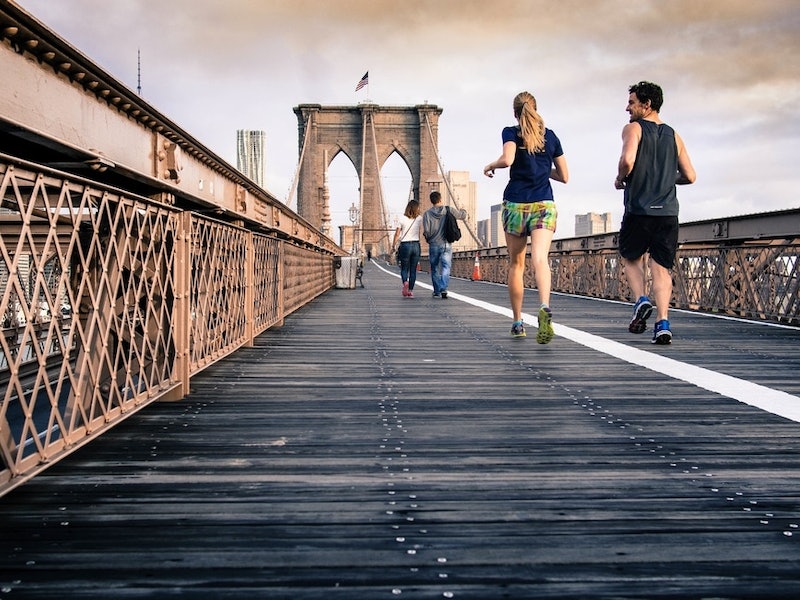 Starting a new exercise regimen takes a lot of willpower, mostly because those first few days (OK, weeks) are incredibly tough, painful, and tiring. It's all too familiar, and it's to be expected. But what you might not expect? The long list of weird things that happen when you start exercising, beyond the usual soreness and agony.

However, before we get to the side effects of exercise, let's talk about that dreaded soreness. According to WebMD, the pain is caused by microscopic tears in the muscle, as well as the accompanying inflammation. It usually strikes you down 24 to 48 hours after exercise, and is known as delayed onset muscle soreness, or DOMS. Cue leaden arms, and achey legs.

It goes to show how much a jog around the block, or 20 minutes spent pumping some iron, can really affect your body. In fact, exercise can truly alter your entire being, from tearing up your muscles, to boosting your mood, and even improving digestion. These weird side effects are mostly positive (who wouldn't want to be in a better mood?), with the occasional less than pleasant effect thrown in. Curious? Read on to find out some of the weird things that can happen when you start exercising.

Once you start working out, you'll find that focusing (and just thinking in general) is suddenly way easier. That's because exercise increases blood pressure and blood flow everywhere in the body, including the brain, according to Justin Rhodes on ScientificAmerican.com. More blood means more energy and oxygen, which makes the brain perform better. Can't complain about that.

2. Your Legs Are Super Itchy

Are your legs every itchy and prickly after you run? Turns out it has nothing to do with sweating, or wearing scratchy workout clothes, and everything to do (again) with blood flow. As Jenny Sugar said on POPSUGAR, "As your heart rate increases and blood flows more quickly, millions of tiny capillaries and arteries in your muscles rapidly expand. This causes adjacent nerves to send messages to the brain, which reads the sensation as itching." It's an annoying feeling, but nothing to worry about.

Burning more calories means you'll want to eat all the time. And sure, sometimes that involves fries and donuts. But more than likely, you'll find yourself wanting more nutritious options. According to David Nield on ScienceAlert.com, a research team from Indiana University linked this to a known phenomenon, known as the transfer effect, where learning new skills and improving in one area of your life automatically triggers a desire for improvements in another. So basically, exercise can inspire cravings for healthier foods. Who knew?

4. Your Feet Are Decidedly Numb

If you've ever dismounted a treadmill with numb, weird-feeling feet, then you totally know what I'm talking about. But don't worry — the tingly in your feet isn't that big of a deal. As Sugar said, "When exercising, the combination of your body temperature rising and the constant stomping causes your feet to swell. If you're wearing thick socks, your sneaks are tied too tightly, or they're too small, you'll end up cutting off circulation to your feet." It's a weird, but harmless, effect of exercise.

5. You Feel Lighter Than Air

Even after just a few days of exercise, your muscles will become stronger, and suddenly you'll feel lighter than air. Leaping up from your desk, and bounding up flights of stairs, are suddenly things you want to do, because it all feels so easy. Enjoy this floaty, strong feeling, and keep up the good work.

Exercise also super powers your digestion. What was once a sluggish digestive tract, bogged down with cramps and constipation, is now a well-oiled machine. As Sara Melone said on AZCentral.com, "Exercise improves blood flow throughout the body, which includes your digestive system. Keep your body moving with regular exercise, and you can keep your digestive tract moving, too." You'll be so regular, and lovin' life.

7. Your Nose Is Super Runny

What is it about exercising that turns your nose into a mess? Well, it's all due to something called exercise-induced rhinitis. According to Sugar, "For some people, working out can trigger allergic reaction symptoms such as congestion, sinus pain, runny nose, headaches, and itchy eyes." Exercise itself may be to blame, but it can also be because you'er running outside with all that pollen, making the issue worse.

If you've been less-than-thrilled with your reflection in the morning, then it may be time to throw some cardio into your life. According to Brittany Smith on MensFitness.com, a study from McMaster University in Ontario followed men and women over age 40 as they embarked on a three month endurance-training regimen. Once they were done, the participants had skin that rivaled that of 20- and 30-year-olds. Now I don't know about you, but that's some pretty good motivation to make exercise a lifelong thing.

9. You Have The Shakes

Exercise can turn you into a wobbly, shaky ball of Jell-O. It usually happens when you push tired or sore can muscles too far, thus creating muscle fatigue and shaking, according to health specialist Solomon Branch on Livestrong.com. Shakiness can also come from holding your muscles in one position too long (think yoga or pilates poses). So if you're shaking a lot, and it's getting uncomfortable, then give yourself a break.

Good old "runner's high" is a real thing, and it can make you feel amazing. It's all thanks to a release of endorphins that happens when the body is put into stressful or painful situations (read: running). Endorphins are structurally similar to morphine, and help minimize pain and discomfort, according to Kristen Domonell on CNN.com. They also bring on feelings of euphoria, hence the the reason runners keep going back for more.

A few too many trips to the gym, and you may find yourself living in the bathroom. This lovely side effect of exercise is often referred to as "runner's diarrhea," and obviously, it isn't as great as runner's high. As Edward R. Laskowski. MD, noted on MayoClinic.org, "The cause of runner's diarrhea isn't clear. Contributing factors likely include the physical jostling of the organs, decreased blood flow to the intestines, changes in intestinal hormone secretion and pre-race anxiety and stress. What is clear is that food moves more quickly through the bowels of athletes in training." It's a gross, but somewhat expected, side effect.

12. You Suddenly Must Drink

Sure, you'll want more water as you sweat it out. You'll also likely want more booze. According to Smith, researchers at Northwestern University found that it's more common for people to consume alcohol after exercise. This could be due to many reasons, such as people working out on big drinking days (the weekend), using alcohol as a reward, or simply feeling so good after the gym that they want to hit up a bar with friends. Nobody really knows, but it's certainly a fun effect.

13. But You Also Get More Hungover

This is a case of life not being fair, because you'll want to go to the gym, but you'll be hit with a far worse hangover afterward. The likely culprit here is dehydration, according to the Irish Nutrition and Dietetic Institute. Exercise dehydrates you, and so does alcohol, so it ends up being a pretty bad combo.

Studies have shown that working out can help improve sleep, which isn't bad for all us insomniacs out there. According to an article on SleepFoundation.org, "A nationally representative sample of more than 2,600 men and women, ages 18-85, found that 150 minutes of moderate to vigorous activity a week, which is the national guideline, provided a 65 percent improvement in sleep quality. People also said they felt less sleepy during the day, compared to those with less physical activity." Sounds pretty good to me.

15. You Magically Become A Morning Person

Because you're sleeping better, waking up early will become less of a problem. With your newfound energy, and amazing sleep, you'll be popping up at 6 a.m. with the best of them. Exercise also offers motivation to get out of bed, even if you're still feeling a bit sluggish. So don't be shocked when mornings become your thing.

Like I said, most of these things are totally positive. Waking up early, improved digestion, feeling light as air — all reasons to go for a jog right now. But don't let the less than pleasant side effects get you down. Simply find ways to deal with them, and exercise on.