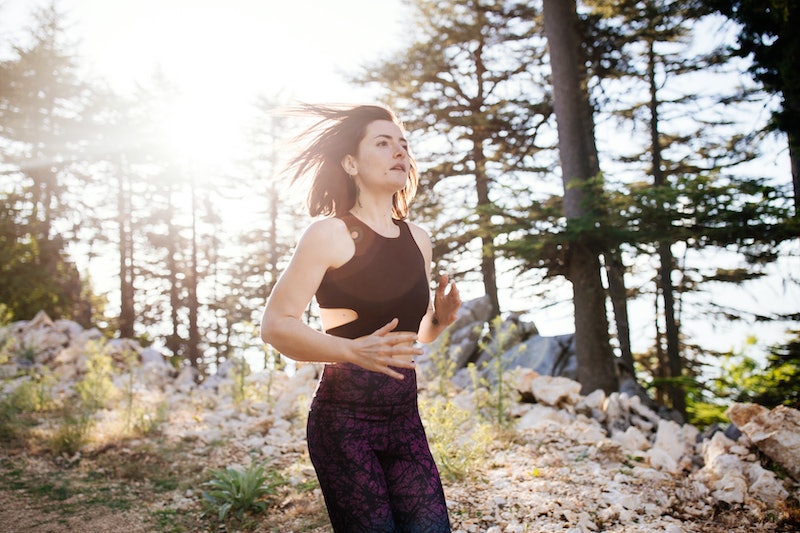 The mornings are great for lots of things, from meditation to enjoying that first cup of coffee. Not all of us are morning people, but there's no denying that those who get stuff done in the a.m. are more likely to be successful, happy folks compared to the rest of us. We all know by now that committing to having a good morning really pays off. But if you don't have it plugged into your routine already, it's about time you added working out in the morning to the list.

Before you scoff and say that's impossible, know that you don't have to devote an entire hour to the cause, and you don't even have to wake up that much earlier. Something as small as 10 to 30 minutes will give you big bang for your buck, and you'll soar through the rest of your day with much more positivity and ease. (OK, maybe not ease, but you'll definitely go through the day hating the world a little less.)

Whether it's yoga, interval training, or a light jog, you've got a lot to gain from raising your heart rate in the a.m. Things are a bit easier at work and you make healthier choices in your diet. Plus, exercising just makes you feel a whole lot better about yourself — the list of benefits goes on.

Here are nine reasons to work out in the morning.

1. The Morning Is When You Have The Most (Hormonal) Motivation To Work Out

Hormones that pump you up for a workout, such as testosterone, are doing their best job in the mornings. After a delicious night's sleep, those hormones are circulating through the body at their peak level, making you feel like you can accomplish a lot more now than you could right after you leave the office.

On a more personal level, you've got less distractions in the first few hours of the day as well. Less people are emailing you, texting you, and bothering you in general. You'll be more driven to give yourself the full attention you need to work up a sweat.

2. You'll Perform Better Than You Would Later On

Studies show that you can get way more out of a morning workout than an afternoon or evening one. That said, you have to go through an adjustment period in which your body gets used to the a.m. training sessions. Afterwards, though, science says you can exceed what you're capable of doing later in the day. If you've got any goals in improving your physical abilities, start getting busy in the morning.

3. Coffee Gives You A Better Workout

Well, this is good news. According to the Journal of the International Society of Sports Nutrition, coffee enhances your athletic performance, giving you the endurance you need to power through a tough workout. Researchers are specific, though, to point out that one cup is enough. Any more than that and you might sabotage your chance to get your heart rate up, as you'll probably have to go to the bathroom.

4. You'll Be Ready For A Full Breakfast

You know you're supposed to eat breakfast, right? No, really, you've gotta eat your breakfast. It may not technically "boost your metabolism," as pop culture likes to tell you, but there are a whole lot of other breakfast benefits proven by science, such as gaining more energy and shedding unhealthy cravings throughout the day.

The problem is, there are some of us who just aren't hungry enough to eat a full meal in the morning. Work out though, and you won't have an issue sitting down for a big bowl of oatmeal.

5. You Won't Get As Annoyed By Everything At Work

You already know that exercising decreases stress and anxiety. Well, it also helps you manage the difficulties that come knocking on your door long after you've wrapped up your workout. Working up a sweat increases the level of norepinephrine in your brain, the chemical that manages your response to stress.

By choosing to run in the morning rather than at night, you arm yourself with the patience needed to face your cranky boss and overly chatty coworkers. It might also equip you with the wherewithal you need to make those tough decisions you usually dread.

6. You'll Boost Your Self-Confidence For The Day

All it takes is 30 minutes or less of moderate exercise to have your self-esteem skyrocket. Researchers at Nova Southeastern University found that this small amount produced mood improvement and psychological functioning. Other studies have shown that working out decreases depressive symptoms, and provides individuals with a sense of accomplishment that lasts for several hours.

Sure, more self-confidence is available to you through exercising at any time of day, but the advantage of working out in the morning is that you're equipped with a boost of self-worth for the whole day. Why miss out on that?

7. Your Memory Will Be Sharper

The University of British Columbia released a study showing that exercising boosts the size of your hippocampus, the part of the brain that's responsible for verbal memory and learning. Dr. Scott McGinnis, a neurologist at Brigham and Women's University and professor at Harvard Medical School, told Harvard Health Letter that "regular exercise of moderate intensity over six months or a year is associated with an increase in the volume of selected brain regions." Yes, please.

Plus, people post-workout score 10 to 15 percent higher on memory and attention tasks compared to before they sweat. So, you'll probably have better luck remembering everything you need to get done at the office if you get moving in the morning.

8. You Don't Even Need To Leave Your House (Or Bedroom)

I used to think people who worked out in the morning were total freaks who left their house at 5:30 a.m. to make it to the gym. Those days are over, my friends, because there are is a plethora of websites and apps that offer you a variety of workouts, all of which you can do in your own room.

You've got all kinds of options. Try your hand at interval training with apps like Nike Training Club or Tabata Pro. If you're a yogi, go to yoga.com or download Yoga Glo, which gives you a wide range of styles to choose from at any time. With most of these at-home workouts, you don't even need equipment to get your heart rate going. And let's not forget the undeniable power of morning sex, which you can also count as exercise.

9. You Won't Have To Worry About It Later

You may not have any plans now, but during lunch you could be presented with something exciting with your friends for the late afternoon or evening, ones that would quickly dismantle your plans to sneak into that 6:30 p.m. boot camp class.

Additionally, a 1998 study proved that human beings become more passive as the day goes on (gosh, we're a pathetic bunch, aren't we). In other words, we should really get the tough stuff done in the morning or else we simply won't feel like crossing it off the list later on. Who can blame us? After a long day of work, we can think of no better way to wind down than to accompany our co-workers to happy hour.

More like this
7 Challenging Yoga Poses That Turn Up The Heat
By Carolyn Steber
How Many Burpees Should You Do Per Day? Here’s What Fitness Trainers Say
By Carolyn Steber
The 11 Benefits Of Aerial Yoga, According To Trainers
By Carolyn Steber
Here's How Often You Should Stretch To Improve Flexibility
By Carolyn Steber
Get Even More From Bustle — Sign Up For The Newsletter
From hair trends to relationship advice, our daily newsletter has everything you need to sound like a person who’s on TikTok, even if you aren’t.