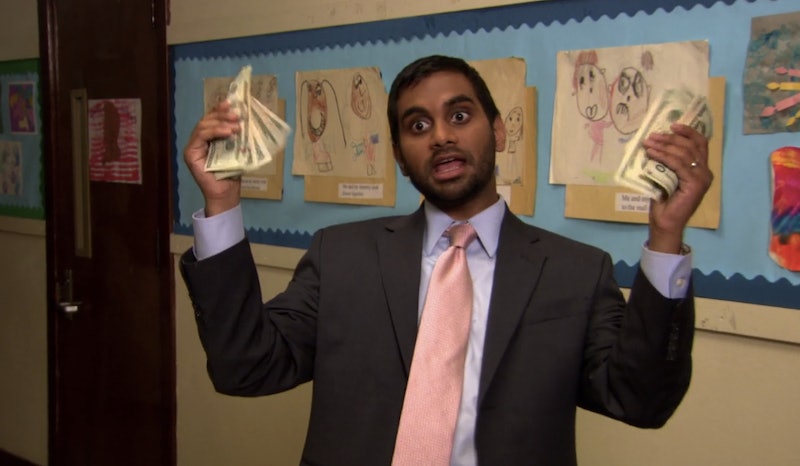 Alright, so, something pretty historic and amazing just happened. On Wednesday morning, Politico reported that Harriet Tubman would be replacing Andrew Jackson on the face of the $20 bill. The movement has been a long time coming, and was brought to the forefront by the Women on 20s campaign, in which Tubman beat out other legendary women, Eleanor Roosevelt and Rosa Parks, in a unofficial vote. Well, it worked! While celebs have shown their support for the change via social media, I saw an important question keep popping up: How will this change affect rap lyrics? Rapping about currency is embedded in hip hop, and I couldn't help but try to imagine how changing from Jacksons to Tubmans could change certain lyrics.

Slang for a $20 bill is obviously a "Jackson," and Rap Genius has a pretty extensive list of slang words for money, including Dead Presidents, paper, racks, and of course, the mighty Benjamins. If Puff Daddy taught me anything when I was 9 years old, it was that "it's all about the Benjamins, baby."

For fun, I thought I'd re-imagine some rap lyrics to accommodate the new Queen B on the block, Harriet Tubman.

To keep the flow and syllables right, Puff would have to say "Harriets" rather than "Tubmans" in this case.

Neither Jacksons nor Tubmans really roll of the tongue in this one. The imagery alone is kind of silly.

Look, this almost sounds the same as the original.

With the inclusion of Tubman, there are no longer only dead presidents on the bills. Oop.

5. "Man all I got is hundreds, I ain't even stuntin', Stuck on the Tubmans like Benjamin Button." —"Currency" by Trina and Lil Wayne

This still rhymes and I think it sounds great. Bye.

Actually, Harriet Tubman goes really well with power and respect, if I say so myself.

7. "I check Tubmans like a food inspector" —"Public Service Announcement" by Jay Z

Maybe it's a play on words and the tubs are full of food? I like that idea.

8. "I don't know what they want from me/ It's like the more Tubmans we come across/ The more problems we see" —"Mo Money, Mo Problems" by The Notorious B.I.G.

This would be a song for the haters, TBH.

Hopefully we will start to hear some of these remixes before the new Tubman 20s are released in 2030(!!!).